Posted on August 14, 2017 by Matt Hough
A mystery series with class and charm 4 Stars

Murdoch Mysteries remains one the classiest and most enjoyable of police procedurals with luscious period production detail, warm and wonderful performances, and some crafty mysteries designed to test the little gray cells of us all.

Our neighbors to the North have sent down to the States some crackerjack series down through the years (Flashpoint, Rookie Blue), and among the most endearingly entertaining is Murdoch Mysteries. A wonderfully clever and well-produced mystery procedural on CBC, Murdoch Mysteries has been going strong for a decade with no end in sight with its core cast intact through multiple seasons and featuring an ingenious mix of episodes both lighthearted and serious in equal measure which have earned the show an international coterie of fans. The eighteen episodes of season ten continue along the same pleasurable lines as its predecessors.

In turn-of-the-century Canada, Stationhouse 4 in the Toronto Constabulary is run by Inspector Thomas Brackenreid (Thomas Craig) whose chief detective William Murdoch (Yannick Bisson) has succeeded in bringing the beginnings of modern day forensic science to his investigative endeavors resulting in a marked increase in crime solutions using the new methodology. By season ten, it’s now 1904, but Murdoch, his medical examiner/wife Dr. Julia Ogden (Hélène Joy), his chief constable George Crabtree (Jonny Harris), her assistant Rebecca James (Mouna Traoré), and other members of the constabulary roam the city and surrounding areas solving all numbers of crimes. Beginning this season with the murders of some debutants and following along in subsequent episodes with the death of a female medical student, a football player stabbed during Olympic trials, a serial killer using cyanide-laced lip rouge, the search for a long-missing child, a series of bodies found on land purchased by Murdoch for construction of his home, and death at the roller rink, the team of investigators have their hands full with evil at work in the city.

One of the more delightful aspects of the storytelling in Murdoch Mysteries is the ingenious ways in which real-life personalities and moments of history are woven into the fabric of the episodes. This season not only works in the football Olympic trials of 1904 and the Canadians’ subsequent gold medal in the event but also the Great Fire of 1904 (could it have been started by the ever-bumbling Constable Henry Higgins’ (Lachlan Murdoch) carelessly discarded lit cigar?). Additionally, real-life historical figures have popped up here and there throughout the run of the show. Such previous luminaries as Nikola Tesla, Thomas Edison, Bat Masterson, Mark Twain, Jack London, and Sir Arthur Conan Doyle have made appearances in Toronto, and this season a very young H.P. Lovecraft (Tyler East) becomes involved in a murder investigation.

Murdoch Mysteries also delightfully brings back to the stories some favorite characters from previous seasons, persons whose eccentricities have endeared them to fans of the show. This year, super spy Terrence Meyers (Peter Keleghan) comes back for a late season episode. Murdoch’s arch enemy James Gillies (Michael Seater), previously thought dead, makes a surprise reappearance in one of the season’s most memorable episodes. Oddball inventor James Pendrick (Peter Stebbings) comes back for another visit and manages to take Inspector Brackenreid with him back to Panama where those pesky Americans are allegedly building a canal. Female private eye Freddie Pink (Alex Paxton-Beesley) also joins in on a couple of cases during the season. The writers aren’t averse to playing on viewers’ recollections with some allusions to famous films or events: there is an entire episode done in the vein of Weekend at Bernie’s, and when a skater gets knee-capped during training, she screams in pain “Why? Why? Why?” in the same manner as Nancy Kerrigan during that infamous attack on her before the 1994 Olympic skating trials. The season ends, typically for many shows but not that usual for this one, with a massive cliffhanger in which the very lives of the principal characters are very much in question.

The core cast remains one-of-a-kind. Yannick Bisson is the no nonsense, firm-jawed title character using his expertise with “finger marks,” ultraviolet light, and primitive electronic surveillance to advance the field of criminal investigation. His frustratingly long and involved courtship of Hélène Joy’s smart, assertive Dr. Julia Ogden finally resulted in their marriage a season or so ago, and season ten finds them happy and contented in their matrimonial state. Thomas Craig’s crusty Thomas Brackenreid is missing from several episodes this season as he takes the football team to the Olympics, stays around to enjoy the St. Louis World’s Fair, and later embarks with James Pendrick on his adventures. But Jonny Harris certainly has his hands full this season not only with his law enforcement career but also venturing into the car repair business and enjoying romantic adventures with two women: burlesque entertainer Nina Bloom (Erin Agostino) whom he later drops in favor of prickly reporter Louise Cherry (Bea Santos). Constable Henry Higgins is just as slow-witted and bumbling as ever in the performance of Lachlan Murdoch, but Constable Jackson played by the personable Kristian Bruun, much in the background in earlier seasons, comes to fore in season ten, assisting the engagingly eccentric Detective Llewellyn Watts (Daniel Maslany) in his searches for several of the city’s missing women.

Here are the eighteen episodes contained on four Blu-ray discs in the tenth season set:

14 – From Murdoch to Eternity

The widescreen television aspect ratio of 1.78:1 is replicated to perfection in these 1080p transfers using the AVC codec. Sharpness is exceptional throughout all eighteen episodes, and colors are bright and fully saturated without being uncontrollable and with accurate skin tones. Black levels are also first-rate, important in several episode which take place at night or in the dark confines of basements and other enclosed, windowless spaces. Each episode has been divided into 5 chapters.

These DTS-HD Master Audio 5.1 sound mixes are surprisingly elaborate for a commercial television series. Dialogue, very important to the show, has been recorded expertly and has been placed in the center channel. Atmospheric effects play a vital role in creating ambiance and suspense in the series, and the sounds have been threaded through the soundfield with much intelligence. Robert Carli’s background score and theme music get wonderful placement in the fronts and rears.

Making Murdoch (32:00 total, HD): a series of twenty-one very brief vignettes (none lasting even three minutes) on all four discs tied to a specific episode or involving a fan question and commented on by producer/showrunner Peter Mitchell, the show’s stars, and guest stars.

Murdoch Mysteries remains one the classiest and most enjoyable of the current police procedurals with luscious period production detail, warm and wonderful performances, and some crafty mysteries which, while possibly not offering the complexities of some of the puzzles from shows like Sherlock or Elementary, still manage to tease more than a few little gray cells. Recommended! 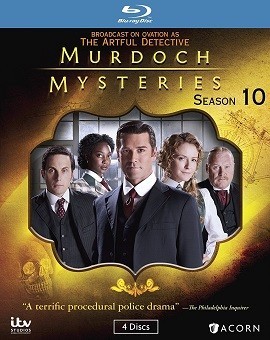