Forum List What's new Dark Style Change width
Log in Register
What's new Search
Menu
Log in
Register
Navigation
Install the app
More options
Dark Style
Close Menu
Posted on August 13, 2017 by Matt Hough
You are using an out of date browser. It may not display this or other websites correctly.
You should upgrade or use an alternative browser.
Forgettable Elvis Presley musical 2.5 Stars

Frederick de Cordova’s Frankie and Johnny, a musical suggested by the old blues chestnut, is basically a film empty of fresh ideas and is decidedly an unimaginative entertainment.

By 1966, the old studio system was all but extinct in Hollywood, but a few stars continued plying their trade using their old formulas for a few more years. One of those was Elvis Presley whose string of fluffy comedies and musicals continued to the end of the 1960s with very few changes in approach or execution despite the worlds of music and movies being in a state of violent flux. Glossy movie stars like Elvis had become were rapidly being replaced by rawer, grittier fare headlined by the likes of a new breed of rougher, earthier stars like Paul Newman, Steve McQueen, and Lee Marvin. Elvis, meanwhile, starred in Frankie and Johnny, a musical suggested by the old blues chestnut but basically empty of fresh ideas and decidedly an unimaginative entertainment.

Inveterate gambler and riverboat entertainer Johnny (Elvis Presley) is a crowd favorite with his leading lady on stage and off Frankie (Donna Douglas, vocals by Eileen Wilson). Their performance of the catchy song “Frankie and Johnny” written by their buddy Cully (Harry Morgan) catches the eye of a Broadway producer, but with Johnny’s enormous gambling debts, they have no money to get to the Great White Way. After consulting a gypsy fortuneteller (Naomi Stevens) who tells him a red-headed woman will be his lucky charm, Johnny latches on to his boss’ (Anthony Eisley) red-headed showgirl sweetheart Nellie Bly (Nancy Kovack) who does bring him luck but who also induces the green-eyed monster into their significant others.

The screenplay by Alex Gottlieb (based on a story by Nat Perrin) is a rather tedious affair of misplaced jealousies that never for one moment feels genuine or resembles real life. Onto this skimpy little story hangs eleven musical numbers, all featuring Elvis either in solo performance or combined with one or more of his cast mates. The production numbers like “Chesay” (the gypsy camp song), the title number, and the standards medley “Down by the Riverside/When the Saints Go Marchin’ In” are all hampered by Elvis’ obvious unwillingness to do any dancing and only walking through numbers with minimal staging. Though the songs come from a multitude of hands, there are a couple of winners: “Shout It Out” comes out of nowhere but is the best upbeat number in the picture, and the ballads “What Every Woman Lives For,” “Please Don’t Stop Loving Me,” and the best of them “Beginner’s Luck” show Elvis still in pleasing, mellow voice. But the film is truly scuttled by a completely inadequate leading lady. Donna Douglas looks divine in all of the waist-cinching antebellum costumes, but her acting is so awkward that it’s hard to believe all those years on The Beverly Hillbillies hadn’t taught her anything about comedy timing or acting with a co-star, and director Frederick de Cordova doesn’t seem to have been able to disguise her terrible insufficiencies as the female lead.

To buoy up his attractive but uninspired leads, the director has peppered his cast with a great array of stalwart show biz veterans. Harry Morgan (dubbed by Larry Roberts) and Audrey Christie as his spouse also bring great professionalism to the movie (they have a blast in the jaunty number “Look Out, Broadway!”), and both Sue Ane Langdon as the overlooked showgirl Mitzi and Joyce Jameson as drunken redhead Abigail whom the boys use in desperation to bring Johnny some luck could give lessons on how to time punchlines and how to make something amusing out of weak, synthetic comedy material. Nancy Kovack is gorgeous if ill-used as Nellie Bly, and Anthony Eisley as Frankie and Johnny’s riverboat boss likewise has looks to spare and a decent on-screen presence. Robert Strauss as his flunky Blackie gets a few moments to shine, too. And if you look quickly, you’ll spot future Adam-12 star Kent McCord in the front row of the audience as an extra.

Though it’s been oddly framed at 1.66:1, this 1080p transfer (AVC codec) has a very film-like appearance and boasts spectacular (if possibly a bit oversaturated) color. There has been some clean-up with this master, too, with the specks and scratches missing here compared to its non-anamorphic DVD counterpart. Black levels can be impressively deep and dark, and the images themselves are a pleasure to watch even when it’s clear that the New Orleans Mardi Gras sequences have been shot on a Hollywood backlot. The movie has been divided into 8 chapters.

The DTS-HD Master Audio 2.0 mono sound has a better than decent amount of fidelity with Elvis’ voice coming through quite succinctly in all of his numbers. Dialogue has also been cleanly recorded (though post-synching is sometimes quite noticeable) and has been combined with the music and atmospheric effects smoothly. There are no problems with age-related hiss, crackle, flutter, or pops.

Though Frankie and Johnny is a forgettable Elvis vehicle, it did decently enough at the box-office in 1966 to lift Elvis for the last time into the distributors’ list of top ten box-office stars. The Kino Lorber Studio Classics Blu-ray is a giant step up from the non-anamorphic DVD release, and fans of Elvis will likely want this much improved edition despite the film’s deficiencies.

I'd forgotten the DVD was non-anamorphic. Shows how often I watch it!

I agree about Nancy Kovack, one of the innumerable talented and gorgeous young women Hollywood refused to take seriously. I first came across her in Strangers When We Meet, another film I'd like to see on Blu-ray disc.

As Kino's disc is a big upgrade from the DVD, I'll buy it.

I had a 35mm IB Technicolor print of F&J back in the 1990s. It had blazing color like this Blu-ray, which I watched last night. People forget what Technicolor prints looked like when art direction and costumes went full on with bright lighting.

"Blazing" is a very apt description of the color processing in this movie.
You must log in or register to reply here. 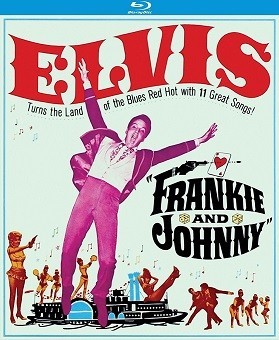