Forum List What's new Dark Style Change width
Log in Register
What's new Search
Menu
Log in
Register
Navigation
Install the app
More options
Dark Style
Close Menu
Posted on August 16, 2018 by Todd Erwin
You are using an out of date browser. It may not display this or other websites correctly.
You should upgrade or use an alternative browser.
Great for the little ones 3.5 Stars

Muppet Babies gets a reboot in this new animated series airing on Disney Junior, and the studio has now released a handful of episodes in a new DVD collection, Muppet Babies: Time to Play!

In my younger years, I used to be a huge fan of Jim Henson’s Muppets, so much so that as a 10-year old with two younger sisters, I actually wrote a letter to the puppet genius suggesting a television show be centered around one of his more famous creations from Sesame Street, and actually received a letter back from Mr. Henson thanking me for writing to him, for being a fan, and even sent me an “autographed” photo of the famous character. Likely a case of coincidence, one month later The Muppet Show was announced in the Fall Preview edition of TV Guide. Fast forward another nine years, to 1984, and CBS announces a new animated series as part of their Saturday morning lineup, Jim Henson’s Muppet Babies. Intrigued, I tuned in for the premiere, then almost immediately tuned out. The series was not only hand-drawn animation (as opposed to advanced puppetry), but was aimed at a very young audience, much too young for someone just starting their second year of college. It was a huge disappointment, and a show I just could not get into, despite it running for eight seasons and eventually evolving into a 90-minute running time at one point.

As with just about everything in Hollywood these days, what goes around come around and ends up being rebooted and updated. Such is the case with Disney Junior’s new computer-generated animated series, Muppet Babies. The concept is the same, pre-school versions of Kermit the Frog (voiced by Matt Danner), Miss Piggy (voiced by Melanie Harrison), Fozzie Bear (voiced by Eric Bauza), Gonzo (voiced by Ben Diskin), Animal (voiced by Dee Bradley Baker), and a new character, Summer Penguin (voiced by Jessica DiCicco), attend a Day Care run by Miss Nanny (voiced by Jenny Slate). Each episode has the Muppet youngsters using their imagination to go on two adventures. Perhaps it was the animation, or the fact that 34 years have passed (gulp), but I found this new incarnation much more palatable. I found myself unable to watch more than one episode in a single sitting, but that was much more than I was able to get through as a college junior. I still find it somewhat difficult to watch what were originally puppets now as computer-generated characters, but that transition, possibly because the animation is not as flat as the original series, is a bit easier to accept as they inhabit a three-dimensional space. The episodes are still very much aimed at the pre-school and kindergarten set and often teach a valuable lesson on friendship, but there is some occasional pop-culture references and jokes that will register with parents and grandparents, such as the inclusion of the rolling boulder clip from Raiders of the Lost Ark in one episode. All of the voice actors put their own take on the classic characters they are portraying, sounding similar but never as an impersonation of that character’s original voice.

Muppet Babies airs on Disney Junior in 720p, and these 480p down conversions look very good, even when upscaled to 2160p by my Sony UBP-X800. The image can appear rather soft, but detail is still quite strong for DVD. Individual hairs and fur, even felt textures, on the Muppets are well-defined. Colors are bright and vivid with minimal banding or blooming (Animal’s reds are often a problem). Contrast is very good, with dark greys that never quite make it to deep black.

Like previous Disney TV on DVD’s I’ve reviewed, all we get is a Dolby Digital 2.0 stereo track that fills the front soundstage nicely, providing some ambient surround if Dolby Surround or similar is engaged o your receiver. Dialogue is clear and understandable, and the musical numbers have a nice fidelity.

These are all aimed at the younger set, the key audience for this DVD release.

Show and Tell Shorts: A collection of ten 2-minute shorts, each Muppet Baby taking his or her turn to show and tell to their friends.

Music Videos: Six of the musical numbers featured in some of the episodes are presented in MTV music video form. What’s So Scary About the Dark, Never Have To Say Goodbye To the Summer, Get Back in the Game, Good Things Come to Those That Wait, You Can Be a Dancer, and Muppet Pirate Shanty.

Muppet Babies: Time to Play! is obviously aimed at the pre-school and kindergarten set, but the episodes have a charm to them that makes them somewhat bearable for older members of the audience. 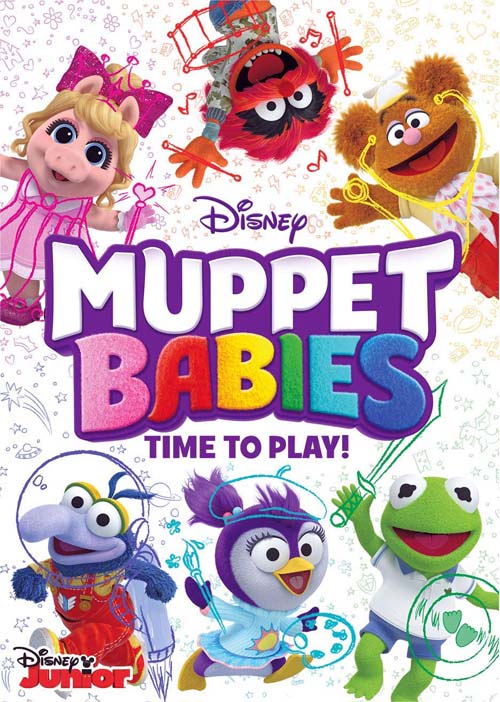