Forum List What's new Dark Style Change width
Log in Register
What's new Search
Menu
Log in
Register
Navigation
Install the app
More options
Dark Style
Close Menu
Posted on July 9, 2019 by Todd Erwin
You are using an out of date browser. It may not display this or other websites correctly.
You should upgrade or use an alternative browser.
Forgotten and under-rated gem 4 Stars

Lawrence Kasdan was one of the most promising writer-directors of the 1980s. He was able to transition from a successful screenwriter (Raiders of the Lost Ark, Star Wars Episode V: The Empire Strikes Back, The Bodyguard) into a successful writer-director with films such as Body Heat, The Big Chill, Silverado, and my personal favorite which I consider his best film, Grand Canyon. The 1990s were not as kind to Kasdan, his films becoming a bit uneven as he began to occasionally direct other writer’s scripts like I Love You to Death, French Kiss, and Dreamcatcher (his first and only foray into horror, based on a novel by Stephen King). Mumford was his return to both writing/directing and the ensemble dramedy (The Big Chill was his first such film of that genre). Psychologist Dr. Mumford (Loren Dean) sets up shop in the town of Mumford, eventually stealing patients from the psychologist and psychiatrist in town (David Paymer and Jane Adams). Word of mouth around town is that Dr. Mumford is a good listener, providing helpful therapy to hoarder Althea Brockett (Mary McDonnell), lonely entrepreneur Skip Skipperton (Jason Lee), sex addict Henry Follett (Pruitt Taylor Vince), anorexic high school student Nessa Watkins (Zooey Deschanel), and chronically fatigued Sofie Crisp (Hope Davis). He rents an apartment from diner owner Lily (Alfre Woodard), who quickly become friends. But Dr. Mumford has a dark secret that he has been trying to run from for years, until it finally catches up with him. To complicate matters, he has fallen in love with one of his patients.

Kasdan’s dramedies are never exactly laugh out load funny, but there is a character-based sense of humor that runs through his movies, and that is very much the case here in Mumford. These are interesting characters, and the humor and dialogue feels natural and very real. It is not a typical cookie-cutter Hollywood film, there is no major climax, no big plot device running the film (which may explain why Disney had no idea how to market this film). Loren Dean’s Dr. Mumford is a pleasant and comforting character, and you really believe that he really listens to people’s problems without them feeling over-analyzed. Mumford was Kasdan’s next to last film before taking a nine year hiatus from directing after Dreamcatcher, returning with another rarely seen movie, Darling Companion.

Mumford finally makes its 1080p Blu-ray debut courtesy of Kino Lorber (though a licensing deal with Disney). The AVC-encoded transfer is excellent, retaining the film’s 2.35:1 theatrical aspect ratio. Colors are vivid and natural, with lush green landscapes and bright blue skies. Detail is excellent, from the imperfections in the plaster work in Dr. Mumford’s office to the subtle checkerboard pattern in the doctor’s blue dress shirt. Black levels are also excellent, revealing nice details without crushing (take a look at Hope Davis’ black blouse at the 1:32:30 mark). This is the best this film has ever looked.

The DTS-HD MA 5.1 track delivers the goods, but it never approaches demo material, nor would one expect it to. Mumford is a very dialogue-driven film, and in that respect, it is a fine track, with each word spoken clearly heard and understood. Fidelity is very good, with James Newton Howards score (and the featured song Till It Shines, performed once by Bob Seger and then again over the end credits by Lyle Lovett and Keb’ Mo) benefitting from the increased dynamic range and LFE support. Surrounds are used to help extend the music but also provide atmospheric sounds like birds chirping in the trees. The subtitle track is oddly formatted, with lines of dialogue from characters running together and noticed a few typos here and there, too.

Welcome to Mumford – Interview with Lawrence Kasdan (1080p; 20:42): Kasdan discusses (in a recent interview) his early love for movies, his passion for writing, his early writing and then directing career, and making Mumford.

Mumford is an enjoyable ensemble piece from one of our best writer/directors. The movie has never looked better and the inclusion of a new interview with its director is a nice touch.

I'm really hoping Fox/Disney license Grand Canyon to Kino sometime soon....
You must log in or register to reply here. 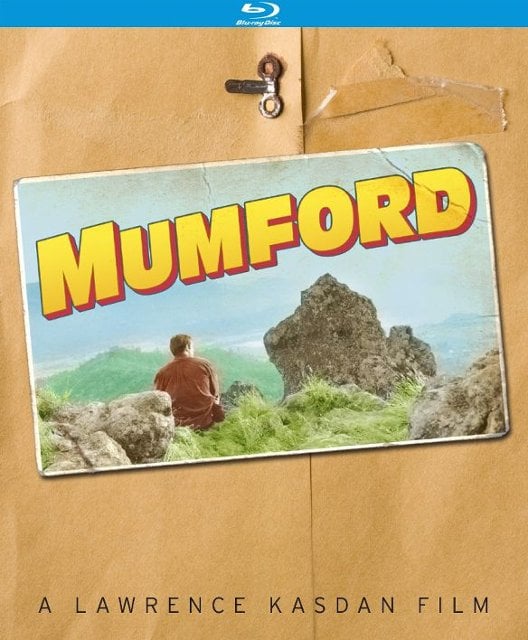