Forum List What's new Dark Style Change width
Log in Register
What's new Search
Menu
Log in
Register
Navigation
Install the app
More options
Dark Style
Close Menu
Posted on July 9, 2019 by Todd Erwin
You are using an out of date browser. It may not display this or other websites correctly.
You should upgrade or use an alternative browser.
Exceptional directorial debut 4.5 Stars

To celebrate the film’s 10th anniversary, Sony has released Duncan Jones’ directorial debut film Moon on 4K UHD Blu-ray which is a stunning upgrade over the previous and at the time exceptional original Blu-ray release.

In the not too distant future, Lunar Industries is the leading supplier of energy by harvesting Helium3 (He3) from their base on the far side of the moon, manned solo by Sam Bell (Sam Rockwell) who oversees the automated machinery with robot GERTY (voiced by Kevin Spacey) as his companion and caregiver. During a routine drive in his rover, Sam has an accident and crashes into one of the harvesters with only two weeks left on his contract. He awakens back at the base completely disoriented in the infirmary, diagnosed with bed rest by GERTY while the station is on total lockdown so that Sam can rest and recover. To make matters worse, live communications with Earth have also malfunctioned, cutting Sam off from all mankind. Getting stir crazy and bored out of his mind, Sam fakes a hull breach, convincing GERTY to allow him to leave the base in order to investigate. Sam returns to the scene of his accident, only to find that not only is the harvester still out of commission, but his rover is still lodged into the machinery. Upon further investigation, he finds someone inside, unconscious, that looks exactly like himself. Sam rescues what appears to be his twin, allowing GERTY to patch him up. Meanwhile, Lunar Industries has been able to send a message back to the base, letting Sam and GERTY know that a rescue team is on their way to repair the damaged harvester. The other Sam awakens, and as the two begin to get to know one another, a chilling secret reveals itself.

Duncan Jones’ Moon is a solid science fiction tale with no space cowboys or laser battles, and often feels like a one-man show as Sam Rockwell plays off himself and the robotic GERTY, and easily ranks as one of the best directorial debuts in recent years. This is a more dramatic film that, at the time, really showed the strengths of Sam Rockwell as a serious actor. Prior to Moon, Rockwell played more comic supporting roles in films like Hitchhiker’s Guide to the Galaxy (Zaphod Beeblebrox), Confessions of a Dangerous Mind (Chuck Barris), and Galaxy Quest (“redshirt” Guy Fleegman). Duncan Jones keeps the pace moving evenly, but also keeps the story, as minimal as it is, intriguing as layers are slowly peeled away.

Moon was shot on film in Super 35mm and completed as a 2K digital intermediate that cropped the film to a 2.40:1 aspect ratio. Sony has upscaled that 2K DI to 2160p for this release with HDR10 color grading. The result is night and day compared to the previous (and for its time) excellent Blu-ray release in 2010. The biggest difference in this HEVC-encoded transfer is how much better it handles contrast, not only in the bright grey of the moon’s surface against a dark starfield, but also the varying gradations of whites and greys in the interiors of the lunar base. The various impressions in the walls are much more pronounced and overall less washed out. The build-up of grime and wear and tear on GERTY is phenomenal, giving the viewer the idea that this robot has been around a long time and seen better days. Sony has delivered another outstanding transfer of a catalog title in UHD.

Although Moon doesn’t have a great deal of action, the new Dolby Atmos mix featured on this release is a nice improvement over the film’s original 5.1 mix (also included in DTS-HD MA). It is a much wider and more spacious (sorry, bad pun) and fluid mix giving a greater sense of the isolation Sam encounters on a daily basis on the base. Sounds move much more fluidly and realistically within the listening area than on the 5.1 mix, such as alarms and other sounds. Heights are used subtly, more to open up the soundstage than for discrete use. LFE is stronger and more robust, too, when necessary. Dialogue is clear and understandable throughout.

Sony has included some nice new extras on the UHD disc, while also including the previous 2010 Blu-ray with all of its special features. I really wish, though, that Sony had included the two audio commentaries on the UHD disc as they have done on other catalog titles.

UHD Disc:
Duncan Jones Retrospective (1080p; 9:23): Journalist Joe Utichi interviews director Duncan Jones over a very low-band Skype call. The two discuss Jones’ love of movies as he grew up, making Moon, and how it is possibly part of a trilogy that includes the Netflix film Mute.

Performance Elements (1080p; 4:49): An interesting look at two takes where Sam Rockwell converses with the other Sam.

Sony’s 10th anniversary release of Moon on 4K UHD Blu-ray is a worthy and recommended upgrade over the previous Blu-ray release from 2010, with a few new special features thrown in for good measure.

I bought this on iTunes the other day for $4.99, it's only in HD and with bonus material. Perhaps, it will upgrade to 4K like other Sony titles. This was a blind buy for me. It's still that price too.

I won't be redeeming my code until next week.

Okay, I had originally cranked out a rather lengthy diatribe as to how can a 2K upscale get a 5/5 video rating, but I shit-canned it. Getting too old I guess to fight these battles anymore. I'm sure the disc looks great, just pretty damn sure it's not what it could (should) have been. Just don't want to see the bar set too low.

Mike Robertson said:
Okay, I had originally cranked out a rather lengthy diatribe as to how can a 2K upscale get a 5/5 video rating, but I shit-canned it. Getting too old I guess to fight these battles anymore. I'm sure the disc looks great, just pretty damn sure it's not what it could (should) have been. Just don't want to see the bar set too low.
Click to expand...

Well, first of all, it's not like they are upscaling a 1080p Blu-ray, they are upscaling an uncompressed 2K studio master, which has a heck of a lot more detail than a Blu-ray. That said, I was actually considering doing what Crawdaddy just did and buy the iTunes version which should upgrade to 4K shortly, but then your post talked me out of it. The Blu-ray disc I already own is sufficient. I should limit my 4K upgrade purchases to movies that either were finished in 4K or else shot and completed on fillum.

The biggest mistake the powers that be made in introducing the new format was calling it “4K” instead of just “UHD”. 4K has a specific meaning while UHD can mean whatever they want it to mean.

Since 4K has actual meaning as a term, people understandably express concern when they’re presented with something that’s not actually 4K worth of resolution. And it’s even worse because 4K TVs actually have slightly less resolution than 4K, in the same way that HD is almost 2K but a few pixels shy.

It also turns out that for most people, what drives their perception of “better” isn’t resolution but enhanced colors and contrast, which is what UHD offers the potential for, regardless of the resolution.

But because they insisted on calling the format “4K,” the discussion gets framed wrong from the start.

Alright, the 2K upscale description pushed my buttons. Checked some other reviews and while they were generally favorable, none gave the disc a perfect video score. So even though I have the Blu-ray Disc and have been upgrading almost everything in my collection to 4K when I can, I will wait for it to drop below $15. Other than the video score, I thought Todd's review was very good. I realize that these scores are opinions based on personal observations. I'm just trying to make a judgment on whether or not to upgrade my Blu-ray of this movie. That's one of the reasons why I read these reviews. Keep cranking them out Todd and I'll keep reading them. May not always agree, but who cares.

Robert Crawford said:
I bought this on iTunes the other day for $4.99, it's only in HD and with bonus material. Perhaps, it will upgrade to 4K like other Sony titles. This was a blind buy for me. It's still that price too.
Click to expand...

I finally got around to redeeming my code today, and this is what I found:

Todd Erwin said:
I finally got around to redeeming my code today, and this is what I found:

4K iTunes On sale for $4.99 right now.
You must log in or register to reply here. 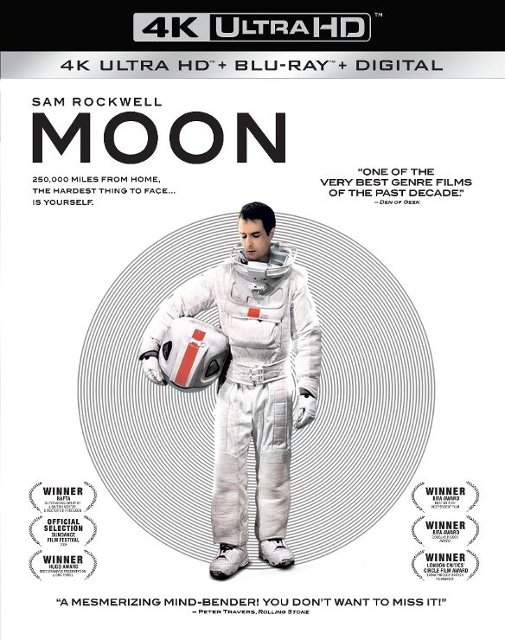