For three years at the end of the 1930s, 20th Century Fox produced a series of very successful B-unit thrillers featuring the Oriental undercover agent Mr. Moto. Peter Lorre played the spy who was adept at disguises and subterfuge, and Norman Foster’s Mr. Moto Takes a Chance was the fourth in the series of eight programmers made during those years.

For three years at the end of the 1930s, 20th Century Fox produced a series of very successful B-unit thrillers featuring the Oriental undercover agent Mr. Moto. Peter Lorre played the spy who was adept at disguises and subterfuge, and Norman Foster’s Mr. Moto Takes a Chance was the fourth in the series of eight programmers made during those years. Shot on the Fox backlot for very little money, the series drew a reliable audience though growing hostilities with Japan must have aided in Fox’s decision to end the series in 1939 and concentrate on their other Oriental sleuth for a few more years – Charlie Chan.

In Mr. Moto Takes a Chance, Mr. Moto (Peter Lorre) is undercover working as a Japanese archeologist studying ruins in Cambodia. He’s actually on the trail of munitions dealers who are stockpiling weapons in Southeast Asia for some unknown purpose. Into the country parachutes lovely aviatrix Victoria Mason (Rochelle Hudson) who has sabotaged her own plane during her round-the-world flight in order to drop into the region. There she meets newsreel photographer Marty Weston (Robert Kent) and his bumbling assistant Chick Davis (Chick Chandler) there to shoot native life to sell to Hollywood studios who need stock footage of jungles and wild animals. But their reception is a mostly hostile one as high priest Bokor (George Regas) doesn’t trust white people and the area monarch Raja Ali (J. Edward Bromberg) seems too dim-witted to know who’s good and who’s bad. But Moto knows, and he’s using every trick he can fashion to keep the visitors safe while searching for the stockpile of weapons he knows is on the island.

In the first few Mr. Moto films (which includes this one), espionage plays a more important role in the proceedings than mystery (the later entries in the series were murder mysteries similar to Fox’s Chan films). The Lou Breslow-John Patrick screenplay tries to set up a murder and some subsequent surprises, but the really evil characters are very obvious almost from the get-go, and though we don’t initially know Victoria’s reason for scuttling her own plane, her actions afterward leave little doubt that she’s more than a simple flyer. In fact, almost everyone here apart from the two-man American film crew is something other than they first appear, but despite the professional sheen to this low budget movie (Norman Foster directed this and five other Moto films, all in stock studio programmer style), it doesn’t end up actually being one of the better Moto movies though the region’s dissatisfaction with the white presence in their country could be seen as ironically prescient in light of future events. As in many of the films, Moto uses an elaborate disguise to snoop around at his leisure (in this one, he’s an ancient guru), but though it fools the natives, there is no fooling the viewer who can easily recognize Peter Lorre’s unmistakable voice under the tattered robes and thick, aged mask he employs.

Peter Lorre always appeared to be having fun playing this character, and getting to hop into and out of disguises along with utilizing martial arts when necessary to subdue villains make Mr. Moto one of the more colorful of the B-unit heroes of Hollywood’s Golden Age. As usual, Rochelle Hudson is more decorative than talented as the secretive Victoria Mason, and J. Edward Bromberg’s Raja Ali likewise seems to be enjoying his masquerade. George Regas is a pretty stock villain as Bokor, but he hams it up nicely, and Chick Chandler as the dull-witted actor trying for a new career as a photographer’s assistant gets a few easy laughs. Robert Kent is rather stiff in the era-typical leading man role.

The film first appeared on DVD in Fox’s 2006 box set of Moto films, and this MOD release utilizes that same 1.37:1 transfer, cleaned up and looking about as good as the film can look in standard definition. Grayscale offers impressive black levels, and solid, consistent contrast keeps the image quality very high. The stock jungle and wild animal footage inserted into the film sometimes doesn’t match particularly well with the soundstage and backlot shooting, and sharpness comes and goes though most of the interiors are crisp and well defined. The movie has been divided into chapters every ten minutes so this film has 7 chapters.

The Dolby Digital 2.0 mono sound mix is decoded by Dolby Prologic into the center channel. There is some hiss present, sometimes louder and more distinct than at other times, and there is a bit of crackle, too, though it’s not as common. The entire volume level of the encode is far too loud and requires user adjustments to prevent distortion or equipment damage. Dialogue, music, and sound effects have all been mixed with surety with no element overpowering the others.

There are no bonus materials offered with this MOD release, meaning that the trailer and the biography of Peter Lorre which were on the DVD are lost with this release.

Mr. Moto Takes a Chance is an average entry in the Mr. Moto series, neither the best nor the worst of them. For those who don’t have the earlier boxed sets of the eight movies, this Fox Cinema Archive release will give you a taste of what the series has to offer.

I'm not sure why anyone would pay $20 for this when for $20 more you can get this and three other Mr. Moto films on pressed discs.

I don't get why they would have stripped the meager bonus features - now instead of using an existing master, they had to create something new. What's the point in that?

I picked up the set as a gift for my stepfather last year, but I haven't had a chance to borrow it and watch myself yet. It's on the eternal list of things to get around to

I have both Mr. Moto box sets. It does seem odd that this was released on the MOD program as a stand alone feature. I know Mr. Moto's Last Warning was inadvertently(?) let loose as public domain so I get why there are individual copies of that floating around, but this is strange.

These are great films, and my wife and I enjoy them quite a bit. This is actually one of the weaker stories in my opinion though, which adds to the strangeness of it being released solo.

Funny, but I think this is the very least of the Moto films and an odd choice for a standalone.

Interesting note regarding it's production. You are correct that it was the fourth Moto film RELEASED, but it was actually the second to be produced (as LOOK OUT, MR. MOTO.) THINK FAST, MR. MOTO proved to be more successful than original expectations and Fox didn't hold this one in much regard so its release order was bumped in favor of THANK YOU, MR. MOTO which the studio thought would be a stronger follow-up. MR. MOTO TAKES A CHANCE (the new title) was bumped again when Fox decided to rush MR. MOTO'S GAMBLE into release in spring 1938 and this one was dumped without much fanfare during the summer of 1938, more than a year after it was filmed. By then, the series was successful enough to withstand a mediocre entry so no harm was done.

Valuable information, Will. Thanks so much!

Richard Gallagher said:
I'm not sure why anyone would pay $20 for this when for $20 more you can get this and three other Mr. Moto films on pressed discs.

Not just Fox but CBS, MGM, and Warner as well. *All* have taken discs OOP and then re-released them as MOD for 2-4 times the price of the pressed copies. Warner has done essentially the same thing with quite a few titles in their short-lived Cult Camp Classics line of box sets. All of those box sets, with 3 films each, are still available, often selling for less than the cost of just one the MOD titles.
Reactions: Richard Gallagher and Will Krupp
You must log in or register to reply here.
Share:
Facebook Twitter Reddit Pinterest Tumblr WhatsApp Email Link 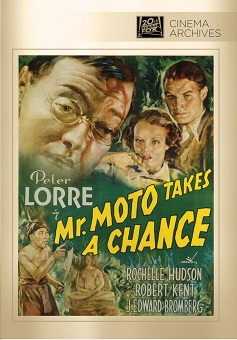