Forum List What's new Dark Style Change width
Log in Register
What's new Search
Menu
Log in
Register
Navigation
Install the app
More options
Dark Style
Close Menu
Posted on April 8, 2016 by Matt Hough
You are using an out of date browser. It may not display this or other websites correctly.
You should upgrade or use an alternative browser.
Unpretentious musical gets an antiquated transfer 2.5 Stars

Having established Pat Boone as a genuine box-office star with a couple of hit 1957 musicals, 20th Century Fox naturally mounted another musical for him in 1958, Mardi Gras and assigned one of the great Hollywood veterans to direct it – Edmund Goulding.

Having established Pat Boone as a genuine box-office star with a couple of hit 1957 musicals, 20th Century Fox naturally mounted another musical for him in 1958, Mardi Gras and assigned one of the great Hollywood veterans to direct it – Edmund Goulding. This was the great director’s swan song, so it would be nice to say that he went out with a classic, but, truth to tell, Mardi Gras is a fluffy concoction, insubstantial and with only a moderately appealing score. A quartet of male leads give it their all, but there really isn’t enough plot for the lot of them, and the romantic couple in the center certainly doesn’t set off the sparks that would sell such predictable material.

VMI senior cadet and schemer extraordinaire Tony Collins (Gary Crosby) dreams up the idea that he’ll hold a raffle to raise money to bring movie star Michelle Marton (Christine Carere) to VMI for their graduation ball with the winner of the raffle to accompany the school band and color guard to New Orleans for Mardi Gras where the starlet will be appearing. Coincidentally, Tony’s roommate Paul Newall (Pat Boone) wins the raffle and reluctantly accompanies his buddies Tony, Barry Denton (Tommy Sands), and Dick Saglon (Dick Sargent) to the festivities. Michelle, on the other hand, tired of her parade responsibilities and longing for a day to herself, skips away from her press agent Curtis (Fred Clark) and his assistant Edie (Sheree North) and wanders the streets bumping into and becoming charmed by Paul and spending the day with him. Paul doesn’t recognize the movie star and thinks she’s a simple girl from California who works in a cannery, but when photographs of the couple appear in the newspapers, Michelle’s studio thinks the romance will be excellent publicity for her next film while Paul, disillusioned when he learns the truth about his not-so-simple girl friend, is disappointed by their conflicting lives and interests.

The screenplay by Winston Miller and Hal Kanter has a bit of Roman Holiday about it as Paul and Michelle enjoy the Mardi Gras with her incognito though unlike the William Wyler classic, he is completely ignorant about her identity and is crestfallen when he learns she has lied to him about her identity. The meet cute-romance-break up-make up nature of the story is pretty standard, so it’s really up to the musical score, staging, and supporting cast to lift the proceedings away from the mediocre, and this is where Mardi Gras just doesn’t quite deliver. Sammy Fain and Paul Francis Webster who had contributed a crackerjack score for Calamity Jane don’t come anywhere near that level with the songs here. Pat Boone is given three solos: the Dixieland jazz song “Bourbon Street Blues,” the title song sung during the parade sequence, and, of course, a love ballad “I’ll Remember Tonight” that just doesn’t have the poignancy of the duo’s much more famous romantic songs “Secret Love” and “Love Is a Many Splendored Thing.” The roommates share two jaunty tunes: “That’s What Stonewall Jackson Said” and “Loyalty” (the best thing in the score) while Tommy Sands gets “Bigger Than All of Texas” in the show’s biggest production number and Sheree North (with Eileen Wilson’s vocal assistance) performs “That Man” while changing clothes, similar in tone and staging to Shirley Jones’ clothes removal number in Boone’s previous hit April Love. Director Goulding doesn’t do anything innovative in the shooting of the numbers (though the nature of this cropped transfer makes critiquing the musical staging somewhat problematic since we’re not seeing the entire frame), but everything flows along nicely, and there’s enough clever cross cutting to smoothly integrate most of the scenes filmed in Hollywood with location shooting at VMI and in New Orleans.

Pat Boone is still playing the upright, milk-drinking straight arrow that he made his name with (though unlike the lack of kissing in April Love, here he does bestow a tentative smooch or two on his leading lady Christine Carere), and he sings beautifully and gets through the dialogue scenes with passable believability. Christine Carere’s thick French accent gets in the way sometimes of expressing herself with feeling, and there isn’t much chemistry with Boone or much of a spark as someone who is supposed to be a top flight movie star (though if she’s so popular, why doesn’t Boone’s Paul recognize her at all). Gary Crosby makes the biggest impression of the three other roommates as the master manipulator, and his pairing with Sheree North, who is basically wasted in the movie, doesn’t get the time it needs to garner much interest. Tommy Sands sings his song (and a few lines in the interpolated “Shenandoah” with the VMI choir) with authority and is paired with dancer Barrie Chase whose acting is very stiff but whose striptease midway through the film will open some eyes. Dick Sargent in an early role is the most forgettable of the male roommate quartet. Fred Clark does his customary slick job as the demanding publicity man eager to keep his client in the headlines.

Here is another pan and scan 1.33:1 travesty of an original Cinemascope musical of the 1950s likely prepared for television broadcasts of fifty years ago. Because there are four roommates who frequently share the screen, the telecine operator has a very hard time keeping more than three in the frame at any one time, and most of the time, folks are hacked in half with the pan and scan nature of the original 2.35:1 aspect ratio frame. (We do see the opening credits and the closing “The End” card in the proper aspect ratio.) Due to the nature of the process, sharpness is compromised throughout though one must admit color is surprisingly strong and accurate through most of the running time. Black levels are only average. The movie has been divided into chapters every ten minutes so this transfer has 11 chapters.

The Dolby Digital 2.0 stereo sound mix does feature directionalized dialogue though some occasional phasing problems sometimes place voices in all the speakers rather than in the left or right channel. Volume levels will require adjustment downward to avoid damage to the equipment or distortion in the presentation. The orchestra sounds quite robust, however, and sound effects have been combined artfully with the dialogue and music. Age-related problems with overpowering hiss and crackle are relatively non-existent.

There are no bonus features with this made-on-demand disc.

As with all of the Fox Cinemascope musicals of the 1950s, Mardi Gras deserves to be presented in its original form and not in this compromised manner prepared for (but not suitable for) televisions of the last century. Only then can the merits of this enjoyably simple and unprepossessing musical be seen and evaluated properly.

Video=0/0 whenever a transfer is p&s. That should be the standard measure.

Oh well, we've become used to it now, haven't we? I would have bought this disc if the film had been presented properly because I like both Pat Boone and Sheree North, and I can never get enough of Barrie Chase.

I suppose someone is buying these pan-and-scan fiascos? If they're not making any money out of this, why do Fox continue to insult their natural market?

I agree with the disappointment at this low grade release and because I saw the film when new at an impressionable age when everything US was glamorous and exciting I might have bought it for nostalgia had it been in 2:35 & 4 track.

This forum is comprised of enthusiasts but the manufacturers understand that for too many people the film is the film is .... and they don't understand our desire for a quality experience. How many people do we all know who have a tv in a convenient corner and watch it with all the lights on?

It would be wonderful were the well known motto to be overturned:

Nobody went broke underestimating the quality ambitions of the public.

- but don't hold your breath. Last weekend BBC2 showed THE FALL OF THE ROMAN EMPIRE in 1:1.85.
You must log in or register to reply here.

DVD Review You're My Everything (1949) DVD Review 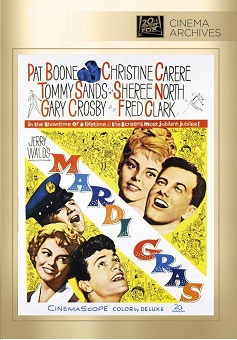