Another strong season of the popular HBO series. 4 Stars

The overall theme of this fifth season of Game of Thrones, based on George R. R. Martin’s A Song of Fire and Ice series of novels, could very well be “Be careful what you wish for,” as the series ramps up for the eventual arrival of winter and showdown with the White Walkers.

NOTE: This review may contain some major spoilers!

As season five opens, Lord Varys (Conleth Hill) has smuggled Tyrion Lannister (Peter Dinklage) out of King’s Landing after murdering his father Tywin (Charles Dance), arriving in Pentos for a short stay. Varys hopes to convince Daenerys Targaryen (Emilia Clarke) to enlist Tyrion as her Queen’s Hand to bring order and peace to the Five Realms. This is quickly thwarted when Mormont (Iain Glen) kidnaps Tyrion at a brothel, hoping to present him to Daenerys as a gift for forgiveness and redemption. Meanwhile, Daenerys is dealing with escalations of attacks by the “Sons of the Harpy” against innocent citizens and her Unsullied. Stannis Baratheon (Stephen Dillane) and his troops have stationed themselves at The Wall, hoping to enlist the Night Watch and the Wildlings in a raid against the Boltons. Jon Snow (Kit Harrington) becomes the commander of the Night Watch, and much to the dismay of his troops, manages to form an alliance with the Wildlings, rescuing them from a brutal attack by the White Walkers. Petyr Baelish aka Littlefinger (Aidan Gillen) brokers an arranged marriage between Sansa Stark (Sophie Turner) and the twisted Ramsay Bolton (Iwan Rheon), hoping to secure his place in the North. Jaime Lannister (Nikolaj Coster-Waldau) enlists the help of Bronn (Jerome Flynn) to save his daughter Mycella Baratheon (Nell Tiger Free) from an imminent threat in Dorne. Arya Stark (Maisie Williams) travels to Braavos to train with the followers of the Many-faced God, led by Jaqen H’ghar (Tom Wlaschiha), a group of silent vigilantes. Cersei Lannister (Lena Headey), losing control of her son, King Tommen Baratheon (Dean-Charles Chapman), finds out the hard way what happens when you militarize a puritanical religious sect bent on wiping out all sin in the city.

There are almost too many story lines to keep track of in this fifth season of HBO’s ratings juggernaut, which may be a benefit to those who binge watch rather than view on a weekly basis. This may also be the darkest season, in tone, thus far, although there really isn’t one singular shocking moment as there have been in the previous seasons. Game of Thrones is very much Peter Dinklage, Lena Headey, and Emilia Clarke’s show, as their characters and performances are what really drive the story each week, and with the major housecleaning of characters in the season finale, even more so in the forthcoming sixth season.

Game of Thrones remains one of the best looking shows on television, and once again the Blu-ray release from HBO/Warner does not disappoint with the gorgeous 1080p transfer in the original 1.78:1 broadcast aspect ratio and compressed using the AVC codec. Colors are vivid and not oversaturated. Contrast is rarely an issue, often providing deep blacks and bright whites. Detail is impeccable, though there are some hints of noise in more challenging images like the tightly concentrated, high contrast patterns in the snow covered mountain scenes with Jon Snow. Nevertheless, the picture is often quite breathtaking and no doubt superior to the broadcast high definition signal. All ten episodes have been spread across four BD50 discs.

HBO has remixed the series in Dolby Atmos (and even included an Atmos trailer on Disc One), and even though this reviewer does not have Atmos installed (or even 7.1, for that matter), the Dolby TrueHD 5.1 fold down manages to provide an active surround and low-end presence. Dialogue is often directed to the center channel, and remains clear and distinguished throughout, never getting lost amongst the major sound effects and score by Ramin Djawadi. My only real complaint is that unsuspecting viewers who do not have Atmos will choose the lossy Dolby Digital 5.1 track from the audio menu (which is the default), and not the Atmos, which contains a Dolby TrueHD 7.1 lossless track. HBO should have included Dolby TrueHD 7.1 as a selection from the menu, regardless.

Dolby Atmos Update: As Todd mentioned in the paragraph above, Dolby Atmos has to be selected from the audio menu. It’s not the default track like on other Dolby Atmos equipped Blu-rays. I watched this in Dolby Atmos using a 7.2.4 system configuration (4 in-ceiling speakers). I haven’t had the chance to watch every episode yet, but I watched parts of several episodes. Overall with the exception of certain localized effects, the overhead channels were used for ambient music (soundtrack) and background effects and successfully created a more immersive sound field than using just my surround back and side channels.

In Episode Guides for each episode: The exhaustive compendium provides descriptions of the show’s characters, locations, and history in context with events of each episode.

Disc One:
Audio Commentary for Episode One: The Wars To Come with Director Michael Slovis, Director of Photography Dave Franco and Actor Ciarán Hinds (Mance Rayder)

A Day In the Life (1080p; 26:01): An inside look at one day of production of one episode, which often spans three countries.

New Characters/New Locations (1080p; 7:41): A look at many of the new characters and lands introduced this season.

The Real History Behind Game of Thrones (1080p): Creator George R. R. Martin is joined by historians as they discuss the historical events that inspired the series, presented in two parts. Part One (18:13), Part Two (22:00)

The Dance of Dragons (1080p; 20:27): An animated graphic novel version of the story of the Greens and the Blacks, the Targaryen civil war that led to the downfall of the dragons.

Although the many plot lines and characters this season could give a viewer whiplash, the fifth season of HBO’s Game of Thrones is still a fairly solid one, and Blu-ray is still the best way to experience the series, especially since it is now mixed in Dolby Atmos. My only complaint is that the discs default to lossy Dolby Digital rather than TrueHD, and we are still waiting for the Dolby Atmos reissues of seasons three and four that were promised last summer.

Thanks for the review, Todd! I picked this one up on the date of release, but I'm working through seasons of a couple other shows before I revisit this season of "Game of Thrones" on Blu-Ray. 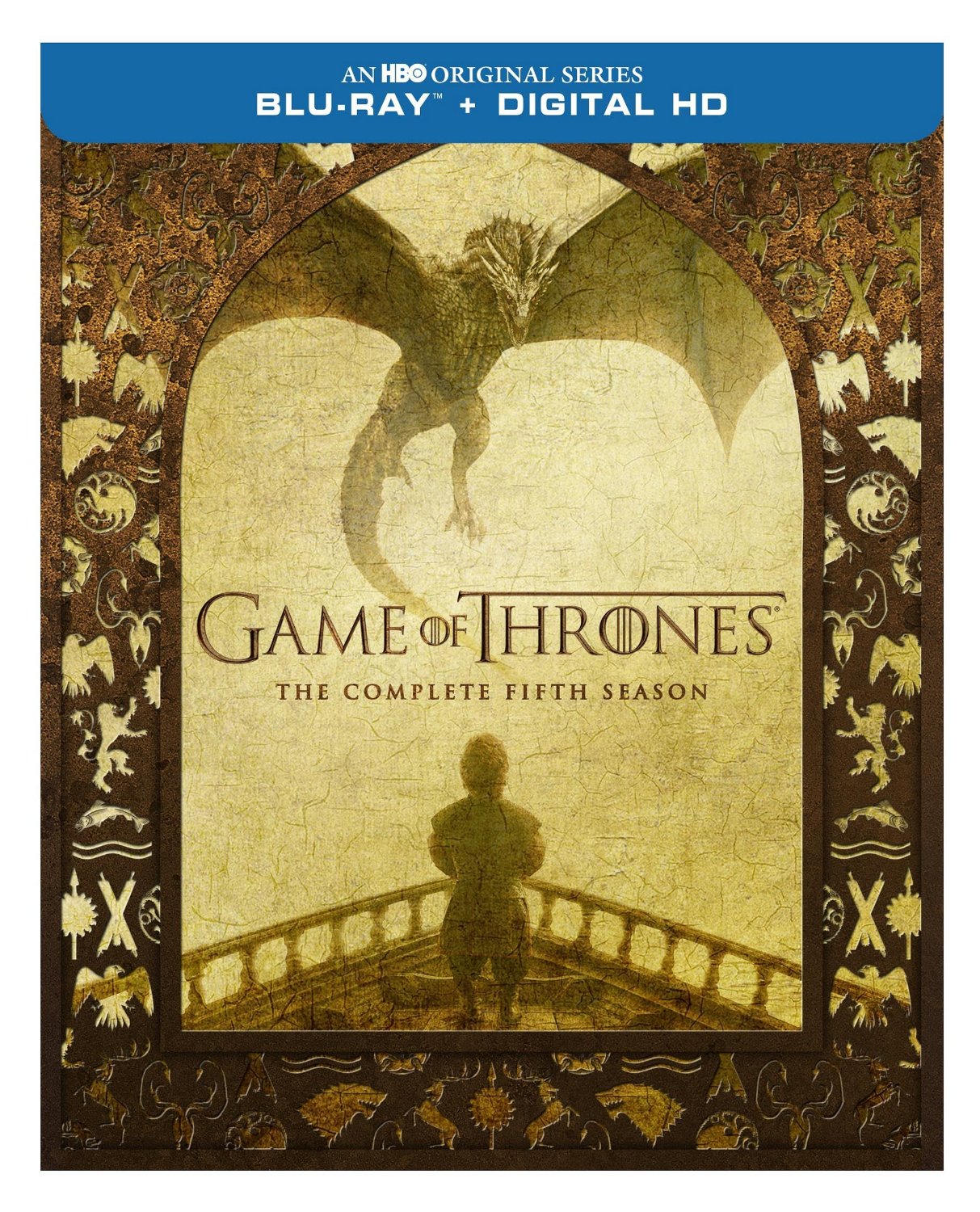