Forum List What's new Dark Style Change width
Log in Register
What's new Search
Menu
Log in
Register
Navigation
Install the app
More options
Dark Style
Close Menu
Posted on October 12, 2019 by Timothy Bodzioney
You are using an out of date browser. It may not display this or other websites correctly.
You should upgrade or use an alternative browser.
Recommended Kaiju classic. 4 Stars

Mill Creek Entertainment has released Ishiro Honda’s 1961 Kaiju classic and fan-favorite Mothra on Blu Ray.  This release includes both the 90-minute dubbed American theatrical cut and uncut 101-minute subtitled Japanese version.  Mothra has more of a fairy tale quality than its predecessors and in fact, bears greater resemblance to the American King Kong than it does Godzilla (or Rodan).

Mothra opens with a typhoon tossed ship run aground on Infant Island.  Infant Island is a nuclear bomb test site for super-power Rolisica.  The four surviving sailors are not suffering from radiation exposure and claim it due to juice provided to them by island natives.  The presence of natives comes as a shock because the island was thought to be uninhabited.  The story is broken by intrepid newspaperman, Zenichiro Fukuda (Frankie Sakai) nicknamed Bulldog and his female photographer Michi Hanamura (Kyoko Kagawa).

A team of international scientists led by Rolisica entrepreneur Clark Nelson (Jerry Ito) is organized to search Infant Island.  Fukuda and Hanamura are denied permission to join the expedition but Fukuda finagles his way onboard the boat transporting the team by posing as a ship steward.  While Fukuda is basically a comic character (Sakai kind of reminds me of Buddy Hackett) his role illustrates the importance of the press in free societies – and interestingly, even if Fukuda is comic, he is still effective at his job.  Without Fukuda’s dogged pursuit of the story, there would be no truth coming from authority figures.

Two singing, twelve-inch-tall fairies (Emi and Yumi Ito) are discovered while saving one of the scientists from a vampire plant.  Nelson wants to take the fairies back to civilization to exploit them.  The researchers are against this and Nelson initially backs off, only to abduct the fairies later and mounts a show, almost a circus sideshow, featuring the fairies.

The fairies are the soul of Infant Island who turn to the island God to free them from their slavery.  The fairies warn that there will be great damage unless they are returned to their home.  This God turns out to be a giant egg.  When the egg hatches the giant caterpillar Mothra emerges and makes his way to Japan save the fairies.

Mothra single purposely makes his way towards the captive fairies, causing the predicted great destruction along the way.  While swimming across the Pacific Ocean Mothra destroys a cruise ship in his path.  Mothra, like other giant monsters, is a force of nature, but what makes Mothra different is that he is provoked by a direct crime, and his goal is not destruction, but rescue.  The destruction is a result of the kidnapping of the fairies.

Once in Japan, Mothra is futilely (naturally!) attacked by the military.  Mothra then weaves his cocoon from which he emerges as a giant moth.  There is much destruction during the rescue of the fairies, but Mothra is triumphant and returns the fairies to their home.

Mothra is one of Toho’s last single Kaiju features.  The first Godzilla is a somber and dark piece about the consequences of nuclear weapons.  The tone of the first film is mournful and unlike any of the following Kaiju movies, moving.  It was an international hit with young audiences.  I can’t think of any series that shifts gears so quickly as the Godzilla series.  The second Godzilla movie Godzilla Raids Again already features battling monsters and is clearly aimed at matinee audiences.  It took the Universal Frankenstein series 3 sequels spread out over 12 years before the monster mash-ups begin.  Not that I’m opposed to monsters getting together and duking it out.

While Mothra does make some broad political statements regarding capitalism, and more potently the cold war, it clearly is aimed at children.  The destruction is more cartoonish, without the dread and suffering featured in the first Godzilla.   The destruction in Mothra is just the cost of giant monsters rampaging through Japan.  Mothra’s mission is messy but not much attention is paid to the loss of life and property, whereas the destruction in Godzilla comes with a sense of dread and real human suffering.  The budgetary penny pinching that affects later Kaiju films is not yet in evidence and Eiji Tsuburaya’s special effects are effective.

In the audio commentary of the American version of Mothra, Kaiju historians Steve Ryfle and Ed Godziszewski (is that really his name or is it coincidental?) speak about the anti-capitalism themes of the piece and point out that Rolisica is an amalgam of Russia and America.  This is true, and Nelson’s exploitation, which is a euphemistic way of saying human trafficking, of the fairies, is capitalism run amok.

But more importantly, the movie comments on the actions of U.S. and Soviet actions and the results of the Cold War on the rest of the world.  A bit of this is trimmed out of the American version, which also contains cuts to quicken the pace.  The abduction and exploitation of two fairies is monstrous – Clark Nelson is a malignant Carl Denham; Denham is like an uncontrollable pre-sexual boy, he doesn’t initially go to Skull Island to rape and pillage.

Denham’s primary goal seems to be adventure for adventure’s sake.  Once Denham discovers Kong he can’t control his childish impulses for ballyhoo in spite of warnings from those around him.  Nelson, on the other hand, is up to no good from the start and on levels Denham couldn’t dream of; Nelson is the ultimate interventionalist who seeks profit from any potential angle.  Nelson is morally corrupt and doesn’t regret his actions, unlike Denham at the end of King Kong (never mind Denham’s relapse in Son of Kong; success can’t be denied).  Ironically the resultant destruction is similar.  This is beginning to sound like a Graham Greene novel.

It is, however, the political circumstances that that exist that enable such crimes that are so destructive.  An arms race is being conducted and damn anyone who gets in the way!  Nobody would know or care about Infant Island if it hadn’t been the site of nuclear testing.  The natives would live peacefully with thankfully little interaction with the rest of the world.

But Infant Island is the site of nuclear tests conducted by nations so arrogant that they apparently don’t even visit before testing.  The idea that ‘superpowers’ would be so reckless with the fate of innocent people is terrifying.  This destruction spreads to Japan like cancer.   It’s almost as if the giant monsters at war are the U.S. and the Soviet Union and the rest of the world is their wrestling mat.  This attitude of ignorance combined with power is scarier than any horror/monster movie.  It is also pretty subversive for a kiddie movie.

I wrote above that Mothra has more in common with King Kong than its Japanese predecessors.    Godzilla and Rodan could be global warming – man’s actions have set something in motion that it can’t control.  But in those films, it’s unintentional ignorance.  Godzilla and Rodan are the results of messy human habits.  They rampage as a result of environmental crimes.  Mothra, on the other hand, is forced to act by the actions of a petty criminal.  While Infant Island would probably be grateful if there wasn’t any nuclear testing, they seem to have adapted to it.  But the theft of what is, in essence, their collective soul cannot go unpunished and hence the birth of Mothra and his resultant destruction.

The end of Mothra contains quite a bit of religious imagery, surprisingly Christian.  The message seems to be that man’s baser instincts, his grasps for power or wealth can only lead to destruction and can only be defeated by something higher or spiritual.  I can’t think of another Kaiju film that goes in this direction.

Mothra looks pretty good on Blu Ray.  I’m guessing it’s the same scan as the Sony release of a few years back and is similar to Sony’s recent release of Battle in Outer Space.  I’m giving the overall image rating a 3.5 but it actually would be between 3.5 and 4.  Some sections look very good and some don’t.  There are a lot of opticals and rear projection and those are never going to look great.  The colors are generally pleasing but I don’t think the source is from anything close to the negative.  There’s a fair amount of damage and it looks like little has been done to fix those issues.  Both Japanese and American versions look the same to me.  Toho is a strange company in that it seems arbitrary who has access to what – Columbia/Sony have been able to release both Japanese and US cuts of some of the films they control while other studios can’t.  I’m excited that Criterion will finally be able to release for the first time in America the Japanese cut of King Kong Vs. Godzilla this month.  At age 58 I was beginning to wonder if I would ever see it.

Both the English and Japanese cuts have DTS-HD Master Audio 2.0 soundtracks.  They sound fine.  Subtitles are included with both cuts.

As far as extras go it’s a little light, they include:

The two cuts and there is a commentary, mentioned above, on the American version by Kaiju experts Steve Ryfle and Ed Godziszewski.  It’s a very informative commentary and more importantly, takes the film seriously.  One can make fun of the special effects, acting, or scripts of these films, but one can’t deny the impact they had on young audiences throughout the world.

A photo gallery and a US trailer

Mothra is great fun.  Its themes can be taken seriously and analyzed, or it can be just enjoyed for the well-crafted, action and adventure piece it is.  Mill Creek’s release is better than any previous video edition of this Kaiju classic.

Thanks so much for the review!

At Film Forum last year, I saw what was supposed to be a 4K DCP of MOTHRA. It looked very similar to this Blu-Ray, though possibly a wee bit sharper. The color and depth of field was exactly the same. What was distinctively different, however, was the soundtrack, which was in stereo and sounded amazing. Full and bright and embracing.

Thanks for the review- the 2 little twins are actually Shobijin (Little Beauties) and used to perform on Ed Sullivan in their natural height of course They were famous and professionally known as The Peanuts.

I really enjoyed my copy.

I need to watch my Blu-ray this month.

Two twelve-inch singing fairies? Do they also play the piano?

All you need to know is right here:
https://godzilla.fandom.com/wiki/Shobijin
You must log in or register to reply here. 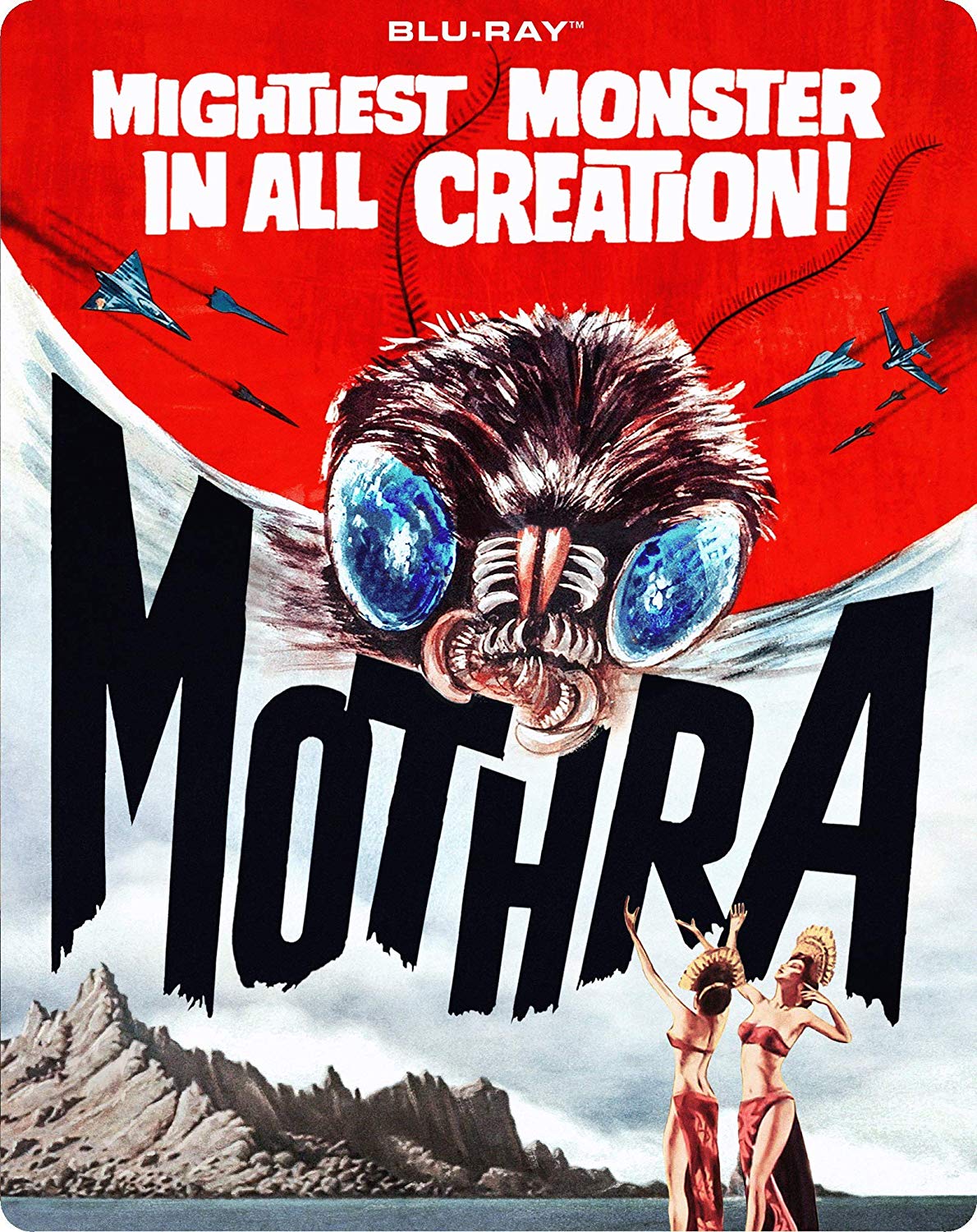