Forum List What's new Dark Style Change width
Log in Register
What's new Search
Menu
Log in
Register
Navigation
Install the app
More options
Dark Style
Close Menu
Posted on October 12, 2019 by Matt Hough
You are using an out of date browser. It may not display this or other websites correctly.
You should upgrade or use an alternative browser.
The suspense may be lacking but the 3D is really great. 2.5 Stars

There is neither great art nor great thrills on display, but there is great 3D to be found in Charles Band’s Parasite, and Kino Lorber’s release of this marvelously restored movie from cinema’s Silver Age of 3D is not to be missed.

One of the movies that ushered the Silver Age of 3D films into the 1980s, Charles Band’s Parasite doesn’t pretend to be anything other than a B horror film with low budget effects, modest direction, and mostly underplayed performances, but in 3D, the movie offers an interesting variety of three-dimensional visual treats that make the movie worth a visit. Its narrative and acting might not stay with you, but some of the 3D work most definitely will.

In a post-apocalyptic America of 1992, scientist Dr. Paul Dean (Robert Glaudini) has created for the state a deadly parasite which a government agency known as the Merchants plans to use to clear away undesirables and enemies of the state. But one of his parasites has lodged itself in his stomach while he has escaped a prison camp with a second one in a thermos which he plans to study so he can learn how to destroy them before they can kill him and the rest of humanity. Local farmer Patricia Welles (Demi Moore) takes pity on the suffering scientist and tries to help him, but local punks called the Ray Guns led by the psychotic Ricus (Luca Bercovici) and a sinister government agent Wolf (James Davidson) are both after Dean for their own purposes.

Written by Alan Adler, Michael Shoob, and Frank Levering, the screenplay is no great shakes though the trio manage to add in three or four moderately effective terror sequences which, had the filmmakers had a bigger budget or a more creative director, might have really been something (blessed with some early model and miniature work by future Oscar-winner Stan Winston, several bursting effects and cadaverous head shots are top notch for such a low budget thriller). Instead, most of the time, the narrative plods along with a violent spasm of activity every fifteen minutes or so abetted with wonderful use of 3D even when the sequences where it’s attached are obviously tacked on simply to use the medium to its fullest (a loony who attacks the protagonist gets impaled on a length of pipe, the film’s supreme moment of 3D effectiveness). Director Charles Band seems at his most desperate in an early scene when a woman (Cheryl Smith) is being attacked and has her shirt ripped off by a couple of goons going the rest of the lengthy sequence bare-chested just for the prurient pleasures of the movie’s intended audience.

Despite his flat delivery of dialogue, Robert Glaudini does have a rather haunted look about him as the tortured scientist, and he’s an easy character for the audience to identify with. Demi Moore in a very early role looks lovely and fresh-faced and has some of the same swagger here that she’d use more expertly in the next decade in A Few Good Men and G.I. Jane. Al Fann as a congenial local bartender gives the best performance in the movie while Luca Bercovici and James Davidson as the movie’s dual bad guys offer a decent amount of malice which works counter to their surprisingly conventional handsome features. The wonderful Vivian Blaine pops up in a couple of scenes as a one-time top star reduced to renting flophouse rooms to the stranded while attempting to pretend middle age has not descended upon her. Tom Villard and Cherie Currie play two of the title character’s more gruesome victims.

The film is presented in its original theatrical aspect ratio of 2.35:1 in a 1080p transfer using the AVC (2D)/MVC (3D) codec. By conventional standards, the image is soft due to the split 35mm frame being used for the over-under 3D system effectively reducing the resolution to that of 16mm film. Still, the image is free of all age-related dirt, dust, scratches, and debris, and color in the 3D version seems closer to realistic levels and more in control than the 2D color timing. Black levels are good but not great.

The 3D has been restored by the 3-D Film Archive, and, as usual, their work is impeccable resulting in 3D that’s as impressive and involving as in any of the 3D films of the Golden Age (though the movie’s quality can’t match the best of the earlier era, of course). Pop outs are numerous and lots of fun. Beginning with the creative main menu screen and right into the main title credits which float in front of one’s face, there are lab tables, snake tongues, fingers, broken glass and wood splinters, parasite slime, and numerous parasite strikes that come right at the audience (not to mention the earlier notable pipe that juts out from the screen to within millimeters of one’s face). The director has placed lots of objects on differing planes within a shot to enhance the 3D effects never for a moment letting the viewer forget that he’s watching a 3D film.

The disc offers two DTS-HD Master Audio tracks from which to pick: the original mono in 2.0 and a remixed 5.1 (which is the default). The mono track is very powerful with excellent highs and lows, and the 5.1 uses Richard Band’s sometimes screechy music cues and jump sound effects to fill its surround channels at appropriate scare moments (at other times, the surrounds are very quiet). Both tracks have been digitally cleaned to remove age-related problems with hiss, pops, crackle, and flutter.

Audio Commentary: co-writer and associate producer Alan Adler does a fine job remembering all he can about the movie’s three-week production schedule sharing stories about many members of the company both before and behind the camera. His comments thin out a bit as the movie runs, but fans of the film will want to hear what he has to say.

From the Inside Out: Writing Parasite (10:38, HD): writers Alan J. Adler and Michael Shoo each separately comment on their improvised writing technique putting down the film’s scenario in a week.

Parasitic: Creating and Designing Parasite (6:23, HD): Lance Anderson who got his introduction to professional film work with Stan Winston in his creature workshop discusses his work on the movie.

There is neither great art nor great thrills on display, but there is great 3D to be found in Charles Band’s Parasite, and Kino Lorber’s release of this marvelously restored movie from cinema’s Silver Age of 3D is not to be missed.

I have this on order and I'm happy to read the 3D is good. Thanks for the review. BTW, is the commentary on the 3D version or only the 2D?

Already received mine -- and the 3D is indeed excellent, with pop-outs galore -- and an excellent restoration. Another great job by 3D Film Archive.
Last edited: Oct 13, 2019

I saw this on its original release. And still remember the pipe scene. Glad to know it’s represented effectively here.

and I remember Vivian ‘Adelaide’ Blaine

Johnny Angell said:
I have this on order and I'm happy to read the 3D is good. Thanks for the review. BTW, is the commentary on the 3D version or only the 2D?
Click to expand...

Absolutely horrendous film. It's a chore getting through this.

The 3D is absolutely phenomenal, but that's the only thing of interest here.

Ronald Epstein said:
Absolutely horrendous film. It's a chore getting through this.

The 3D is absolutely phenomenal, but that's the only thing of interest here.
Click to expand...

And that's the whole point, isn't it?

Put another way: Is anything more horrendous than Stewardesses and... (ugh...) A*P*E? But we bought 'em anyway, to support 3DFA's efforts. As the proverbial little kid said, ".... there must be a pony in here somewhere!" Every Stewardesses, Parasite and (ugh) A*P*E gets us closer to more ponies that 3DFA may get greenlit to tackle.

Camps said:
And that's the whole point, isn't it?

Put another way: Is anything more horrendous than Stewardesses and... (ugh...) A*P*E? But we bought 'em anyway, to support 3DFA's efforts. As the proverbial little kid said, ".... there must be a pony in here somewhere!" Every Stewardesses, Parasite and (ugh) A*P*E gets us closer to more ponies that 3DFA may get greenlit to tackle.
Click to expand...

You have a point.

However, I once said that even a bad movie could be good in 3D. I take that back. The excitement is over. Even though this film sported spectacular in-yo-face 3D, it just ... just ... sucked.

And that's the problem with most (but not all) that is to come...

This is not the fault of anyone -- particularly the 3-D archive -- but these are all terrible "B" films that can barely be watched once.

I don't know how you sell this stuff to anyone but the die-hard fans like us.

Camps said:
And that's the whole point, isn't it?

Put another way: Is anything more horrendous than Stewardesses and... (ugh...) A*P*E? But we bought 'em anyway, to support 3DFA's efforts. As the proverbial little kid said, ".... there must be a pony in here somewhere!" Every Stewardesses, Parasite and (ugh) A*P*E gets us closer to more ponies that 3DFA may get greenlit to tackle.
Click to expand...

Add Jaws 3D, Metalstorm, Andy Warhol's Frankenstein, Friday the 13th part 3, Treasure of the Four Crowns, Comin at Ya!, etc. that are fun to watch in 3D but story wise are pretty bad. But, us 3D nuts still buy them.

Haven't seen a couple of those, but Jaws 3D and Friday the 13th 3D are practically masterpieces, IMO, in comparision with Parasite.

I'm a fan of some of the stuff put out by Charles Band through his Full Moon Features company, but Parasite was just an awful effort.

I saw Parasite in a theater when it first came out. At the time, the movie brought some scares, but the 3D pop outs were pretty blurry. Watching it now, the 3D is great, but the movie is not so good. Still, I enjoy it for what it is. The restoration is amazing, and I’ve always wanted to see that pipe in my face again, so I'm really glad to have a copy.

Ronald Epstein said:
Absolutely horrendous film. It's a chore getting through this.

The 3D is absolutely phenomenal, but that's the only thing of interest here.
Click to expand...

Well, it's a slog, and without the 3D aspect, it's borderline insufferable. But it's catalog 3D, so I'm all-in. Kind of fun,
You must log in or register to reply here. 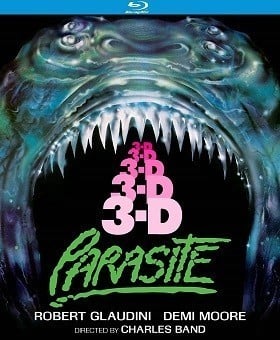