Forum List What's new Dark Style Change width
Log in Register
What's new Search
Menu
Log in
Register
Navigation
Install the app
More options
Dark Style
Close Menu
Posted on May 29, 2020 by Martin Dew
You are using an out of date browser. It may not display this or other websites correctly.
You should upgrade or use an alternative browser.

Truly stunning multi-channel audio, about as good as it gets 5 Stars

To say that Lyngdorf Audio, founded in 2005 by Peter Lyngdorf, has made an impression on the AV industry would be a delightful understatement. This small Danish company of audio gurus manufacture a line of, let’s face it, rather good amplifiers, speakers and CD players, with home cinema processors now leading the charge. If any greater honor could be bestowed on a hi-fi outfit than a sister company set up at the behest of the finest piano makers in the world, Steinway, then you pretty much have this organization’s output wrapped up in a nutshell. (It is even written into the mission statement of the Steinway Lyngdorf brand that concert pianists should not be able to tell whether they are listening to a real piano or a recording.)

But before you get too excited and head out to your dealer to purchase a top-of-the-range Steinway Lyngdorf stereo system, keep in mind you’ll probably need to have a chat with your bank manager first; hint, you won’t see much change from coughing up for a two-bedroom house. Lyngdorf Audio, by contrast, does make top-notch kit that is more within the budgetary reach of mere earthlings. To add to that, the company is now using the latest version of the now legendary 14-year-old RoomPerfect automated in-room calibration system, which seriously diminishes the requirement for acoustical treatments in any listening environment.

The 12-channel MP-40 ($9,499 plus tax) which we review here is the third and latest of a small line of Lyngdorf home cinema surround processors, preceded by the higher-ticket 16-channel MP-60 and 12-channel MP-50, and which is marketed as embodying the same quality as its forebears but targeted at “smaller home cinemas and entertainment rooms.”

Not surprisingly for a gadget at this price point, the MP-40 is beautifully designed, solid-looking, yet discreet, and would complement the hippest of city condominiums or high-tech media rooms. Only an input selector dial and nicely weighted volume control accompany two displays set into a gun-metal grey textured aluminum front fascia. The remote control exudes quality, is slim and tactile, with keys arranged comfortably enough for dark room finger navigation (but without the luxury of backlighting). As well as IR, there is an RF option for remote control. The unit itself has no forced cooling and therefore operation is completely silent.

The MP-40 will decode all common immersive audio formats including Dolby Atmos, DTS:X and Auro-3D, and the rear panel of the unit lines up 16 XLR balanced outputs and 1 x SPDIF coax for a second music zone. Audio inputs are made up of AES/EBU SPDIF, 3 x SPDIF coax, 4 x SPDIF optical, and 1 x USB. With a video through-put of up to 18Gbps, the unit also supports 4K 60Hz with Dolby Vision, HDR10 and HLG, and HDMI connectivity allows for three 2.0b inputs, one output and HDMI eARC. There are various control interface connections, including 12v trigger in/outs and an SD card slot for settings back-up.

The processor can be registered on your home network and connected via ethernet cable only, but not wirelessly. You can control menu and setup via the Installer Menu using any video output from the MP-40, or via web interface.

The Installer Menu runs you through an intuitive process which ensures that all your channels and amplifier outputs are logically assigned before asking you to verify that all speakers are connected and confirmed with gentle pink noise cues. Although Lyngdorf provides 12 discrete channel outputs for, say, a classic 7.1.4 immersive setup, the availability of 16 total XLR outputs means you can enjoy further flexibility by assigning more subwoofers or even matrixed height and surround channels, should you choose. You will have to manually enter physical distances from your prime or ‘Focus’ listening position to each speaker, as well as enter your own speaker sizes and crossover points. 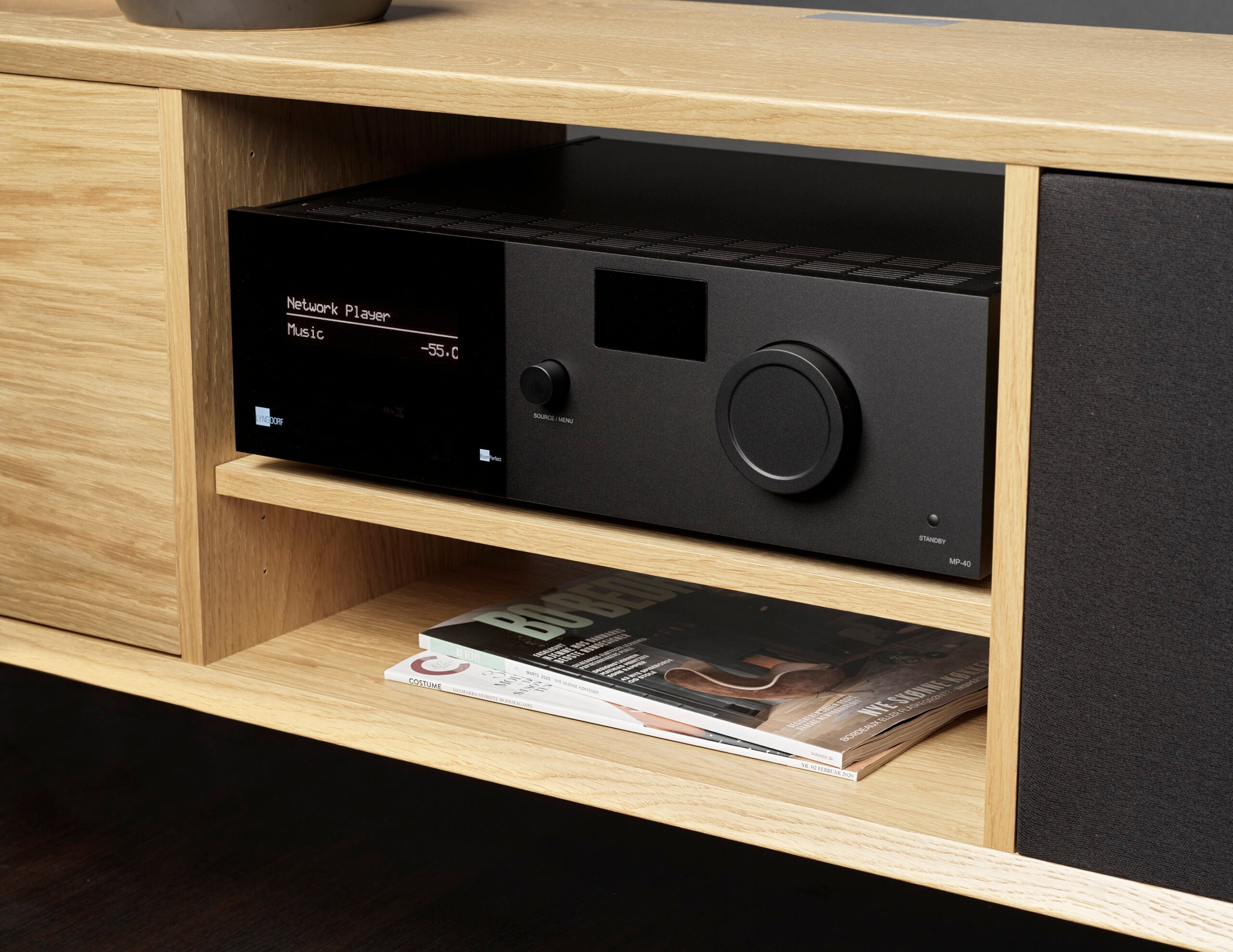 RoomPerfect is designed to ensure what Lyngdorf predictably calls a “perfect” surround sound experience, regardless of which speakers are being used or in which room they are set up. This should eliminate the need for bulky bass traps and other expensive acoustical treatment. Lyngdorf recommends using a minimum of two subwoofers placed in corners, if possible. RoomPerfect’s bass management philosophy is to integrate main speakers with subwoofers for seamless alignment without the audience being aware of individual loudspeakers. Furthermore, although two subwoofers effectively represent stereo bass here (and not the mono daisy-chained variety à la THX), Lyngdorf incorporates sophisticated timing techniques based on each individual room to alleviate standing wave interference.

The first order of business with RoomPerfect calibration is to set up the Lyngdorf-supplied rugged stand on which sits the included microphone for connection to the XLR input on the rear of MP-40. Not only does the menu ask the owner to measure the ‘Focus’ listening position or sweetspot using the microphone at ear height and played-back test tones, it also suggests setting up a ‘Global Filter’ to enhance listening from anywhere in the room. This is achieved by placing the microphone in multiple, random, asymmetrical locations, and running through another set of test tones for each. The process took me about an hour, but the number of speakers in your room will determine the length of time needed.

I tested the MP-40 here using a 7.2.2 setup of my own M&K S-150s (ear level), M&K K7s (for height channels), two M&K V12 subwoofers, and nine channels of Parasound HCA- series THX-Certified power amplification. I also had an opportunity to audition the MP-40 in our UK distributor’s reference 9.6.4 demo room with a complete M&K 300 series speaker array. Blu-ray players in both environments were Panasonic DP-UB820s.

The final gunfight showdown in John Wick: Chapter 3 – Parabellum (2019) 4K Dolby Atmos Blu-ray provides enough of a manic lead-eating frenzy that it’s a slam-dunk for putting an audio system through its paces. Not only did the MP-40 emphasize the shrieking bullet fire ricocheting above and below inside an enveloping orb of sound, each gunshot managed to pierce my chest with a visceral, immaculately timed thud. At no time amidst the mayhem is audio fatiguing or tinnitus-inducing, even as you approach reference levels. 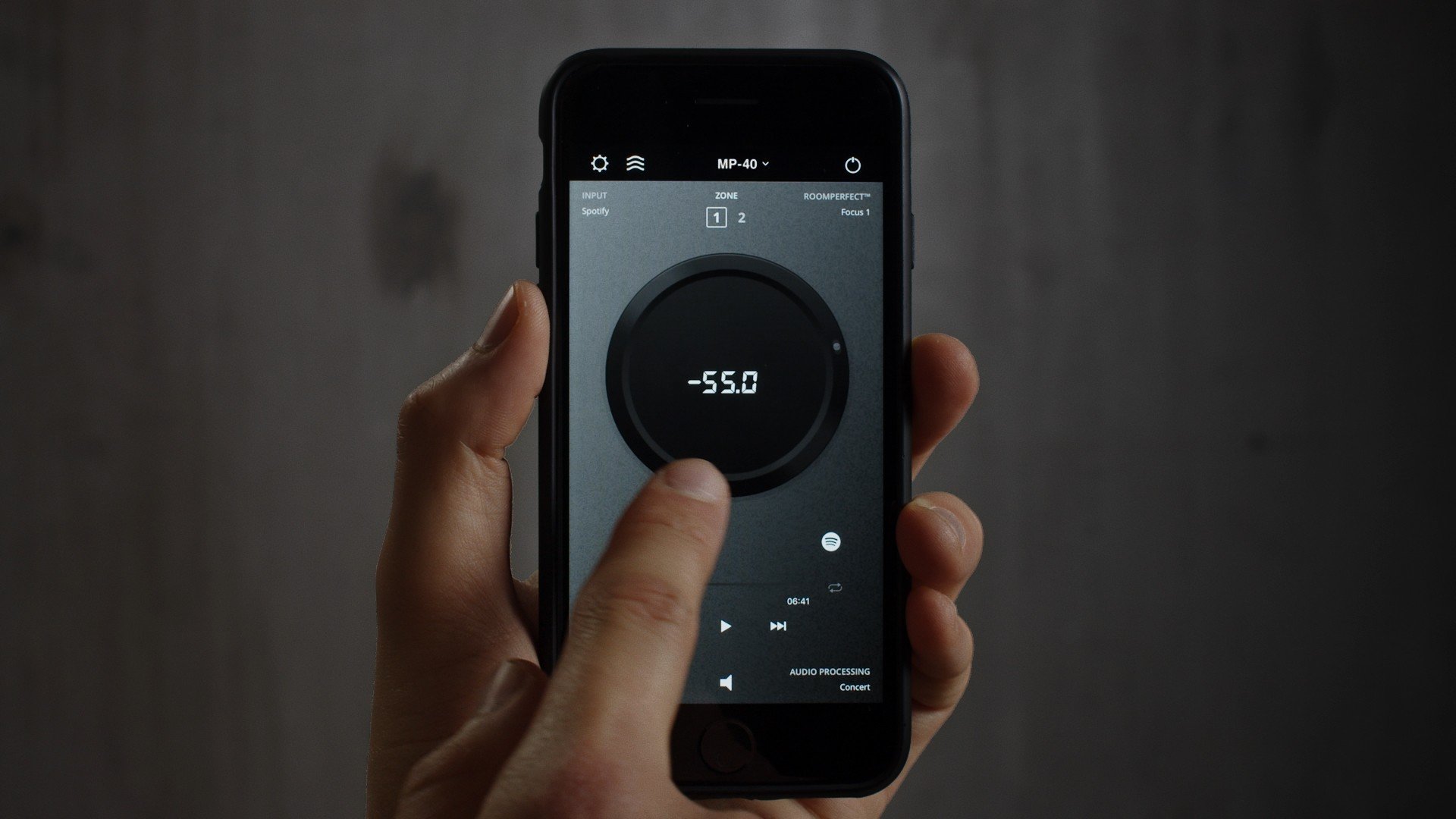 The processor allowed the DTS:X mix of E.T.:The Extra-Terrestrial (1982) to come into its own during the bike chase with John Williams’s score engulfing the surrounds and heights to deliver the most rich and expansive representation of the music one could ever wish for. The final fanfare as the spaceship shoots across the night sky distinguishes each individual horn while almost catapulting you along for the ride.

The way in which the MP-40 could evoke every available nuance from the opening and title sequences of Indiana Jones and the Last Crusade (1989) (DTS-HD 7.1) Blu-ray was nothing short of a revelation. From the quietly building orchestra filling the soundstage, the isolation of every clink of the horses’ tack, to the voices echoing around the Utah canyons, there is not one subtlety missed by the Lyngdorf. Having used several audio sequences from the Indy films as training tools at Lucasfilm, I became highly familiar with these mixes. I can categorically state that I have never heard such pristine home cinema audio outside the mixing suites at Skywalker Sound.

Multi-channel music recordings are not left wanting either. The Dolby Atmos mix for Roger Waters: The Wall (2015) BD exhibits the most extraordinary marriage of bass to front speakers throughout, and is exemplified by ‘Another Brick in the Wall Part 1’. I would not usually think to use words like ‘transparent’ or even ‘invisible’ to describe bass performance, but these seem to be the only strangely appropriate adjectives that come to mind.

There are a number of preset equalizer filters called ‘Voicings’ in the setup menu, but I found I preferred to use the completely flat response Neutral mode. With that said, it’s entertaining enough to try out the different settings, which can be edited, added to, and deleted. There are also post processing features for scaling up Dolby, DTS and Auro-3D soundtracks to their respective all-speaker immersive counterparts, namely Dolby Upmixer, Neural:X and Auro-3D Auromatic. Certainly, the Dolby and DTS upmixers worked competently on the 5.1 and 7.1 sources I tested.

There are not many times when auditioning audiovisual equipment that you feel you have just walked into undiscovered territory, but on this occasion the description seems to be apt. If this processor shows us two things, first it’s that dialog, music and effects can be achingly real and beautiful; and second that bass doesn’t have to be invasive, aggressive or removed, but can be subtle, powerful, warm and integrated. It also proves that while this box is not cheap at $9,500, there is a world out there that doesn’t necessarily mean increasing budgets automatically equal diminishing returns. If you can afford it, get one.