Forum List What's new Dark Style Change width
Log in Register
What's new Search
Menu
Log in
Register
Navigation
Install the app
More options
Dark Style
Close Menu
Posted on August 29, 2017 by Matt Hough
You are using an out of date browser. It may not display this or other websites correctly.
You should upgrade or use an alternative browser.
A decent coming-of-age story with some stunning custom cars on display 3 Stars

An unusual East Los Angeles car culture known as Lowriders gets an unexpected feature film spotlight in Ricardo de Montreuil’s Lowriders, a coming-of-age story set among the showy custom automobile aficionados dotting this part of California. The story of a family torn by generational differences isn’t all that unique, and melodrama is very much a part of the movie’s narrative style, but the beautiful graphic art and the amazing car restorations are worth even some of the film’s sudsier moments.

Danny Alvarez (Gabriel Chavarria) is a tagger and graphic artist who luxuriates in the thought of his graffiti art being seen all over Los Angeles placed wherever and whenever the spirit moves him. His father Miguel (Demian Bichir) can’t understand Danny’s lack of respect for the property of others and doesn’t much value Danny’s artistic gift. Danny’s stepmother Gloria (Eva Longoria) is more loving and understanding of Danny’s immaturity and even welcomes the return of Miguel’s older son Francisco (Theo Rossi) who’s just getting out of an eight-year prison term for grand larceny. When Miguel isn’t immediately welcoming of his son, Cisco announces that he’s formed his own car restoration gang, the Central City Car Club, and has every intention of presenting a restored automobile at Elysian Park, the mammoth gathering of lowriders who name a “best in show” car each year guaranteeing the winner prize money and, in Miguel’s case, great publicity for his garage which could use the business. Danny, always arguing with his father, decides to cast his lot with his brother’s new club and paints a dazzling original mural on Cisco’s entry in the hopes of that sealing his victory over his father in the contest.

The screenplay by Elgin James and Cheo Hodari Coker does a good job delineating the social divide between the East LA denizens and an artier, more sophisticated crowd that Danny is thrown into when he begins dating a photographer (Melissa Benoist) who recognizes his great gifts but lectures him on his lack of seeking commercial interest in his talent (Danny’s ambitions clearly don’t go far enough into consideration about making a living). Still, the majority of the narrative focuses on the Alvarez family’s striving for the grand prize at Elysian Park and the fallout generated by the results of that contest after which the melodrama begins building to a couple of almost unbelievable climaxes (feel good as they may be). Director Ricardo de Montreuil offers us tantalizing glimpses into some of these souped-up automobile marvels, but he doesn’t allow us to linger long enough to take in their brilliance in full, being too anxious to flash cut between various entries in the contest. He also doesn’t stage and frame altercations between the brothers and between the father and his sons consistently well with the camera not always catching facial features which, in a family where looks and body language count for a lot more than words, are the focal points of interest in these interpersonal relationships.

Demian Bichir gets top billing as the rather sullen and demanding father who can’t find words of love and encouragement for his sons and ends up pushing them away rather than sitting down and talking out their differences. Gabriel Chavarria’s Danny is the film’s narrator, and it’s his coming-of-age story as he leaves behind the carefree abandon of youth for something more substantial within his family due to the events in the narrative. Theo Rossi offers a very grounded, angry performance as the slighted Francisco (known as “Ghost” since his name is never spoken by his father once he goes to prison). Melissa Benoist complete with nose ring and body art spends the central portions of the movie as Danny’s girl friend eager to talk up his great talent as a graphic artist and impatient with his lack of motivation to push his brand himself. Eva Longoria only gets a few spotlight moments as the loving stepmother, but she makes them count supporting and encouraging her husband and stepchildren to work out their differences through mutual love and respect. Tony Revolori as Danny’s best friend Chuy, Yvette Monreal as tag-along girl friend Claudia, and Cress Williams as Detective Williams who finds himself embroiled in the Alvarez family business on more than one occasion all make solid impressions.

The film’s theatrical aspect ratio of 2.40:1 is faithfully reproduced in this 1080p transfer using the AVC codec. Sharpness is excellent throughout and very necessary for the copious amounts of graffiti and body art that get focused on during the course of the movie. Color is solid and always well under control with accurate contrast dialed in to provide an outstanding viewing experience. The movie has been divided into 20 chapters.

The DTS-HD Master Audio 5.1 sound mix can be quite effective when the entire soundstage is utilized to establish locales in the story. A noisy club early-on gives a real feel of the listener being in the middle of the action, and some of the loud revving engines at the Elysian Park event make use of the fronts and rears well, too, but other sequences around busy Los Angeles offer up surprisingly silent rear channels. The hip hop music and Bryan Senti’s background score get the full surround treatment. Dialogue has been placed in the center channel.

Lowriders: Art, Love, and Family (1:22, HD): a very brief overview of the story and characters is offered by director Ricardo de Montreuil and stars Demian Bichir and Eva Longoria.

Ghost’s Arrival (1:16, HD): director Ricardo de Montreuil and stars Demian Bichir and Eva Longoria discuss the importance of the character of Ghost to the story and the impressive power of Theo Rossi’s performance.

The Culture of Lowriders (1:02, HD): executive producer Estevan Oriol along with Demian Bichir and Eva Longoria discuss the culture of lowriders in East Los Angeles.

Lowriders is a decent coming-of-age story set in the world of expressive automobile customization, but it’s that series of amazing cars which gives this familiar story that little bit of extra attraction that make it into a movie worth a peep. 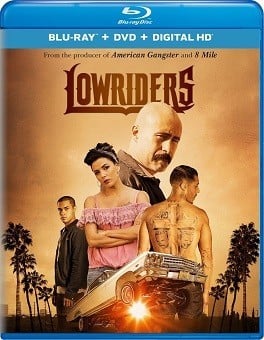