Highly recommended to fans of Batman: The Animated Series who enjoy a humorous Batman. 4 Stars

Batman and Harley Quinn benefits from some of the same talent that made Batman: The Animated Series a cultural force in the reinvention of the Dark Knight detective for TV viewers. Kevin Conroy and Loren Lester return to provide voices for Batman and Nightwing, the film is produced by Batman:TAS producers Alan Burnett and Bruce Timm, and it is co-written by Timm with James Krieg(Justice League Action).

Batman and Harley Quinn is a deliberate throwback to Batman: The Animated Series, which makes itself evident from the first scene which imitates the opening credits of the original series.  Batman and Nightwing investigate a break-in at STAR Labs engineered by Poison Ivy(Paget Brewster) and the Floronic Man(Kevin Michael Richardson).  Nightwing seeks out Harley Quinn(Melissa Rauch), recently out on parole, since she is a known associate of Poison Ivy(see “Harley & Ivy” on Batman: TAS.)

After Harley teams up with Batman and Nightwing, various hijinks ensue, which is to be expected with Harley Quinn.  Some of the action scenes are played for laughs, which may not sit well with viewers expecting a serious Dark Knight, as in the Christopher Nolan films, or some of the other recent DC Universe animated films.  Batman: TAS was created  in the early 1990s shortly after the fairly serious Tim Burton films had taken the character in the opposite direction from the campy Adam West TV version of the 1960s.  Batman: TAS borrowed heavily from the serious tone, and set designs, of the Burton films, but also mixed things up with some humor, including the creation of Harley Quinn as a sidekick to the Joker.

Anyone who remembers and enjoys the episode “Christmas With The Joker” will recognize the tone in this film which includes an abundance of slapstick and humor with the action.  Anyone expecting a more austere plot(like Mask of the Phantasm, recently released on Blu-ray by the Warner Archive Store) may be disappointed that this feature length film is more Archer than Bond.  [Spoiler alert!]  The tone of the film may be expressed best in a scene in which Nightwing  seeks out Harley and finds the tables turned as she has him trapped (and tied):

Harley:  It’s funny.  I always kind of thought you and Batman didn’t like girls…

Harley:  You know, that book.  With the headlights and the eyeball gouging.  I had to write a paper on it back in college.  Got a B minus.

This reference to Seduction of the Innocent by Fredric Wertham is the kind of meta joke representative of the intentions by the makers of this film.  The remainder of this scene, and context, are deliberately left vague in this review, but it bears mention that Batman & Harley Quinn is racier than the original animated series and definitely earns its PG-13 rating with language and situations that may not be appropriate to pre-teens.  In some respects, this film is aiming for a much older audience, not unlike Warners’ original Looney Tunes, although some might say otherwise to the extent that some of the humor here is deliberately coarse and arguably juvenile.  Word to the wise: parents will want to prescreen this one to determine if the sexual situations and jokes are appropriate for the ages and maturity of their children.

Batman and Harley Quinn benefits from some of the same talent that made Batman: The Animated Series a cultural force in the reinvention of the Dark Knight Detective for TV viewers.  Kevin Conroy and Loren Lester return to provide voices for Batman and Nightwing, the film is produced by Batman:TAS producers Alan Burnett and Bruce Timm, and it is co-written by Timm with James Krieg(Justice League Action).

Melissa Rauch (Bernadette on The Big Bang Theory) has the thankless task of voicing Harley Quinn in this film.  Arleen Sorkin originated the role in Batman: TAS and her absence is felt in the reunion of the other voice actors from the series(Conroy and Lester).  Harley is intended to be a brassy New York girl, and Sorkin played her like Dorothy Comingore’s Susan Alexander in Citizen Kane.  (Does this make Joker a surrogate of Charles Foster Kane?)  Rauch’s Harley goes for the same East Coast accent and attitude, which Margot Robbie nailed in Suicide Squad, but still falls short of the high bar set by Sorkin.  I kept hearing Bernadette which took me sometimes out of the film when I wanted instead to be hearing Harley Quinn.

Since I enjoyed the humorous aspects of Batman: TAS as much as the more serious episodes, I find Batman and Harley Quinn is a worthy addition to the continuity of the animated series.  This film is not exactly a full reunion of the series cast, since many notable characters from the series(and their voices) are absent from the proceedings.  Batman and Harley Quinn is a fun exploration of some new situations for characters that we knew from the animated series, which is more for the adults than the kiddies in tone, like many of the other DC Universe animated films.

The film is displayed in a 1.78:1 aspect ratio with the AVC code in 1080p.  Contrast is excellent with solid blacks and sublime line detail.  Colors are rich and appear true to the source.   A couple of isolated instances of banding are the only apparent flaws(which are not apparent on the UHD disc, as noted in my review of that title).

The English 5.1 DTS-HDMA audio has no apparent flaws.  Directional audio is discreet and limited in use.  Dialogue is always audible in the mix of sound effects, music, and spoken word.  The soundtrack composed by Kristopher Carter, Michael McCuistion, and Lolita Ritmanis, all veterans of other DC Universe animated films, is given good representation on the sound mix.

Special features are in 1080p on the BD disc(*except where noted) and consist of all of the following:

Loren Lester: In His Own Voice(11:46): Robin and Nightwing voice Loren Lester talks about his experience voicing Dick Grayson for Batman: The Animated Series.

A Sneak Peek at Batman: The Dark Knight Returns, Part 1(12:36): Not really a sneak peek since this was released in 2012, but this featurette was created to promote the (then) upcoming release.

A Sneak Peek at Batman: The Dark Knight Returns, Part 2(6:52): Not really a sneak peek since this was released in 2013, but this featurette was created to promote the (then) upcoming release.

A Sneak Peek at Batman: Assault on Arkham(7:29): Not really a sneak peek since this was released in 2014, but this featurette was created to promote the (then) upcoming release based on the Batman Arkham videogame series.

This deluxe edition comes with a Harley Quinn action figure and a DVD.

Batman & Harley Quinn is an enjoyable trip back to the world of Batman: The Animated Series in what would be a light-hearted extended episode of that series.  The video presentation on this Blu-ray disc is excellent.  The English 5.1 DTS-HDMA audio is flawless, and there is a wealth of special features.  The inclusion of the “Harley & Ivy” episode of Batman: TAS is welcome as it provides context to the relationship in the film between Harley and Poison Ivy for those unfortunate viewers who have never seen that episode.  (Note to Warner Bros.: please remaster and release the entire Batman: TAS so that we can enjoy those episodes in better than up-scaled 480i.)  Although this film does not hit on all of the high notes of the original series(nor does it try to), Batman and Harley Quinn is a fun and amusing romp with these characters.

Thanks for the Review! I was about to pass on this installment based on some other reviews I had read, but you have convinced me that this is a nice extension of TAS. (And I just rewatched the Joker ep you referenced and understand the humor you alluded to.)

This one came in the mail yesterday and I'm planning on watching tonight. Good to know it gets a thumbs up...that means I'll likely enjoy this outing. 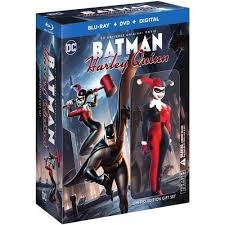