Superheroes struggle with obstacle from within as well as the usual external villains in Warner Brothers’ latest direct to home video animated feature which revisits the Justice League Unlimited versions of the Justice League and the Legion of Super-heroes.

In Justice League vs. The Fatal Five, the Justice League of the present is threatened by the Fatal Five of the 30th Century, with members of the Legion of Super-heroes in pursuit to help Superman, Batman, and Wonder Woman save the day.  Actually, the day is saved not by the holy trinity of the Justice League but by Jessica Cruz, the new Green Lantern, and Star Boy of the Legion of Super-heroes, both of whom struggle with mental illnesses and are all the more heroic for overcoming their personal demons.  This unique dimension of this animated film demonstrates that there are still many themes and ideas that remain unexplored in past superhero films.

The Justice League of this film is not the anime-influenced version that has appeared in animated features in recent years, but rather the version with character designs created by Bruce Timm and others for the Justice League and Justice League Unlimited series that aired with new episodes on Cartoon Network from 2001 through 2006.  Producer/animator Bruce Timm is actually involved with this film, as is Alan Burnett(Batman: The Animated Series).  Original Justice League voice actors Kevin Conroy, Susan Eisenberg, and George Newbern make a welcome return to the voices of Batman, Wonder Woman, and Superman that they played in the Justice League series that aired on Cartoon Network with new episodes from 2001 to 2006.
It is wonderful to see a return to this version of the Justice League with its attractive character models and original voice actors.  (Note to Warner Brothers:  please let this group of talent make as many of these films as they can be coerced to make.)  As with the Justice League TV series, the focus is not so much on Wonder Woman, Batman, and Superman as on the supporting players in the Justice League (and Legion of Super-heroes).  The Fatal Five, consisting of Tharok, Persuader, Emerald Empress, Mano, and Validus, are mostly unknown variables to all but the most devoted Legion fans, but not every film needs to feature Lex Luthor and the Joker, which can get old and overused after a while.
Justice League vs. The Fatal Five is a welcome return to the universe of the Justice League animated series.  The focus on the Green Lantern Corps. and the Legion of Superheroes is interesting, and consistent with the series’ trend of expanding beyond Wonder Woman, Batman, and Superman.  The voice talent and production team on this feature will hopefully return for more adventures in this corner of the DC Universe.

Justice League vs. The Fatal Five appears on blu-ray in a 1.78:1 screen aspect ratio.  The line-work and fine detail of the animation seems to be reproduced with true fidelity in this Dolby Vision HDR transfer on UHD disc. Blacks are inky and solid, and colors are vibrant.

The English DTS-HD 5.1 audio track has punch with some nice contributions at the lower range from the subwoofer.  Directional audio is limited but effective.   Sound effects and dialogue are always audible at the top of the mix.  French and Spanish audio are available in Dolby Digital 5.1.

Special features are located only on the blu-ray disc, not the UHD disc, and include all of the following:

Justice League vs. The Fatal Five is fun and unusual superhero film featuring heroes who struggle with, and overcome, mental health issues.   This version of the Justice League is arguably the best version on film, and I hope we see more of these animation character models in future films.  The video and audio presentation are first-rate on this UHD disc with Dolby Vision HDR, and the special features are fairly interesting as well.  Justice League vs. The Fatal Five is recommended both for general viewers as well as fans of the TV series. 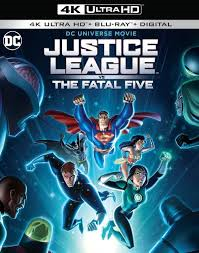