Forum List What's new Dark Style Change width
Log in Register
What's new Search
Menu
Log in
Register
Navigation
Install the app
More options
Dark Style
Close Menu
Posted on April 27, 2019 by Sam Posten
You are using an out of date browser. It may not display this or other websites correctly.
You should upgrade or use an alternative browser.
Oh fuck, they got the munchies! 3 Stars

Justine (Lorenza Izzo) is an idealistic but pampered and naive student at Columbia University. She’s drawn to the activism of fellow student Alejandro (Ariel Levy) and falls into his orbit. Alejandro’s plan is to take his girlfriend Kara (Ignacia Allaman) and their crew to Peru to protect an indigenous tribe from being decimated by oil and mineral mining. Leveraging Justine’s attraction they get her to commit to the journey. After successfully staging a protest in the Amazon, their plane crashes not far from the protest site. On landing, they are stunned and injured, losing the pilots and about half of their contingent, and are immediately beset upon by the very tribe they were hoping to protect. The natives are not simple hunter/gatherers, but bloodthirsty cannibals led by a village elder (Antonieta Pari) and her headhunter (Ramón Llao). Starting with the biggest guy, the tribe starts violently chopping, cooking and consuming the Americans. With no rescue coming, can any of them survive?

Those of you who have seen Green Inferno already may be wondering ‘wait, how did THIS get a Highly Recommended rating from Sam?’, but bear with me a bit! Yes, it’s true that the film did not have overall great reviews, standing at 37% critics review and an even worse 30% audience score on Rotten Tomatoes. But for those of us who are classic horror fans, this is an amazing throwback to films from a past where blood and gore and cannibalism could be exploited as a genre unto itself. Even Roth admits he wasn’t a cannibal movie fan at first, but doing research he learned about films like Cannibal Holocaust, where there is a film within the film being made, called ‘The green inferno’ and he knew he had to make a genre film to bring it to current audiences. Even Steven King gave major kudos, calling Roth’s creation “a glorious throwback to the drive-in movies of my youth: bloody, gripping, hard to watch, but you can’t look away”.

So yes, The Green Inferno is an exploitative throwback with modern twists. It puts a spotlight on lazy activism via Social Media, and on the plus side it really brings awareness to Female Genital Mutilation which continues every day today for millions of women around the world. Is it a great movie? Probably not. But the enthusiasm the cast and crew brings to it, backed by filming a real Amazonian tribe with limited exposure to the modern world is incredible. To convince the village members, who had never seen a real movie, to participate Roth had to bring them a TV and DVD deck. Instead of showing them a classic movie like ET or the Wizard of Oz, they showed them Cannibal Holocaust! And the villagers thought it was hilarious and bought in.

Plus the effects are 90% practical. Crazy bloody and fun. The few digital effects only add to the mix in positive ways. All of this combines to make something those of us who love classic shock and gore films are sure to love. 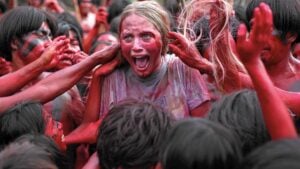 Per Roth in the commentary track the film was shot Full frame on Canon 5D Mark 2s and C300s and cropped in post to 2.35, the box lists it as 2.4. It looks great on this disk. The greens of the jungle are lush, the colors of the villagers are vibrant, and the blood and torn flesh looks amazingly creepy. Roth talks quite a bit about production issues they had, almost losing some important city shots and not having hit record on the big protest scene, but for guerrilla film making it all came out near perfect. The worst you can pin on them are a few blown out backgrounds, but colors, grain and motion all work well. 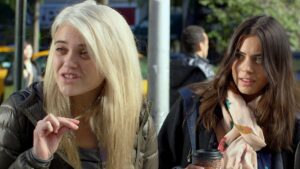 Besides a stereo track your only choice is English 5.1 DTS HDMA and it works well here. The musical score is enveloping front stage, and effects reach around to the rear in realistic and fun ways. Darts and arrows fly well, and the explosions and plane crash are highly realistic. 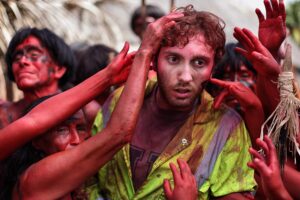 Truth be told the biggest part of getting a highly recommended is the amazing treasure trove of extras packed in this disk set. First, the entire 28 track Soundtrack is included in as a separate audio CD. MORE of that please!

Easily a 5 outta 5 for all that. I never listen to the audio commentary tracks but I listened through the whole thing while writing this review. That alone is fun and recommended. 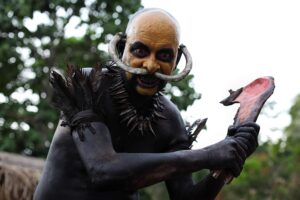 Overall I was blown away twice by this film. First by the retro revisionism of cannibalistic gore that Roth delights in making, and a second time by digging through the treasure trove of extras that are packed on this disk. Actually you can add a third time when I first started listening to the full soundtrack on the included CD. Judging by the Rotten Tomatometer it’s not for everyone. But as a throwback to classic horror it fits right in and I’m on board completely for it. 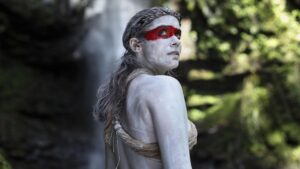 Eyes of a Stranger - Blu-ray

Note that this release has been postponed from April 23rd to June 25th!
https://bloody-disgusting.com/home-...y-release-eli-roths-green-inferno-april-june/
T

Saw ER's The Green Inferno on the older Blu a couple of years ago. As with other ER films, though this is supposed to be a horror flick I found myself laughing quite hard throughout much of this. Hilarious movie! It seems that ER intentionally makes his characters unsympathetic, so that when they end up dying you not only don't feel sorry for them, you're looking forward to seeing them taken out - LOL!

The misguided college students obviously had too much time on their hands. So, when it turned out that they were captured & eaten by natives - whom they were trying to protect by their protest - it was obviously very ironic & also extremely funny.

It was especially amusing how one of the students mentioned that it was good Jonah was one of the first to be eaten since, given his size, they "won't have to eat any more of us for a week" - LOL!


The only part of the film I didn't like was the after-credits scene, when it was revealed that Alejandro was still alive & in native paint?! I doesn't make any sense that he would have escaped being eaten.
I will say that the film looks stunning in Blu; the PQ is incredible, and I can't say that for all Blu's.
Last edited: May 1, 2019
You must log in or register to reply here.