Forum List What's new Dark Style Change width
Log in Register
What's new Search
Menu
Log in
Register
Navigation
Install the app
More options
Dark Style
Close Menu
Posted on May 12, 2016 by Todd Erwin
You are using an out of date browser. It may not display this or other websites correctly.
You should upgrade or use an alternative browser.
"Joy" is, well, a joy to watch! 4 Stars

Joy, David O. Russel’s tale of a young woman (Jennifer Lawrence) who lost her way in life only to recapture it some 17 years later by inventing the self-wringing mop, is an uplifting character study, if you can get past the negative comments put forth by her very dysfunctional family, including her father, played by Robert Niro.

Joy Mangano (Jennifer Lawrence in yet another Oscar-nominated role) is a single mother of two trying to keep it together. Her shut-in mother, Terry (Virginia Madsen), lays on her bed all day watching soap operas, refusing to leave her bedroom. Joy’s ex-husband, Tony (Edgar Ramirez), an out of work lounge singer, shares the basement with her father, Rudy (Robert De Niro), and are constantly at each other’s throats. The real saving grace is her grandmother, Mimi (Diane Ladd), the only adult who ever (and still does) believe in her. When Joy was a young girl, she was always being creative, making paper houses in her bedroom as her half-sister, Peggy (Elisabeth Rohm), often watched in frustration and disbelief. That quickly changed when Rudy and Mimi separated, and his destructive temper towards one of Joy’s creations shattered her imagination. But one day, while trying to mop up shattered bottles of red wine on the deck of Rudy’s girlfriend Trudy’s (Isabella Rossellini) boat and tending to the cuts in her hand from hand-wringing the mop, Joy has a revelation and begins drawing in her daughter’s room. Fed up with her dead-end job at Eastern Airlines, she asks Trudy to invest in her invention, the Miracle Mop, a self-wringing and machine-washable mop. After some hesitation, Trudy agrees to front some money for a prototype so Joy can show it to some local retailers, with help from her childhood friend, Jackie (Dascha Polanco). This does not go well, with the local hardware store giving her the cold shoulder and eventually the mops are confiscated by the police during an illegal demonstration in the K-Mart parking lot with Joy’s children and Tony as witnesses, and Trudy (with help from Rudy) urges Joy to give up . But Tony knows someone at a new retailer whose stores are on cable television rather than a brick and mortar, and through his connection arranges a meeting with Neil Walker (Bradley Cooper), the head of upstart channel QVC. Neil is put off by the mop at first by its plastic handle and simple design, however Joy manages to sell him on the product, and Neil convinces Joy to take out a second mortgage to deliver 50,000 mops. The initial sales pitch on QVC is a disaster, with the host unable to properly demonstrate how to use the mop, causing Neil to drop Joy’s product. On the verge of bankruptcy, Joy storms into Neil’s office, demanding a second chance, this time having her demonstrate the mop on television. The mop is a huge hit, but the company providing the molded pieces is cutting into the profits by inflating their prices. This leads to a confrontation with her half-sister Peggy and the owner of the plastic molding company, ending in Joy’s arrest for trespassing, and eventually Trudy and the family urging Joy to give up entirely and file for bankruptcy to save face. It is at this point that Joy realizes she needs to take matters completely into her own hands, leading to a showdown in Texas that will change her life forever.

A movie about the inventor of the Miracle Mop doesn’t sound like something that would be considered Oscar material, or even something from a major studio with top talent attached. It doesn’t even sound like a movie that would be interesting as a TV movie. But Writer-Director David O. Russell has fashioned this tale as that of a woman who was on a path of creativity and through decisions by others and her own lost her way in life, and with perseverance and taking back control of her life, managed to find her way back and come out the other end as one of the most successful female business owners in the US. Jennifer Lawrence proves yet again that she is this generation’s Meryl Streep, turning in yet another Oscar-nominated (and deserved) performance as Joy. Diane Ladd is the second-best thing in the movie (she should have received a Best Supporting Actress nomination) as Joy’s grandmother Mimi. Bradley Cooper is commanding as QVC exec Neil, and Melissa Rivers does an exceptional job at channeling her late mother Joan (who was a staple during the early days of QVC). My main complaint with the film is the amount of time Russell takes to set up his house of cards before the audience begins to realize what the movie is about, and that is almost the half-way mark.

Joy is yet another movie that was completed in 2K, despite being shot on 35mm film, and arrives on UHD in an upconverted 4K, but with HDR applied in the mastering process. The result is a slightly sharper picture with increased contrast and wider color gamut than its Blu-ray counterpart. The freckles in Jennifer Lawrence’s face are much more pronounced on the UHD than on the Blu-ray, and footsteps in the snow (and there is a lot of snow in this movie) are far more detailed.

The disc contains the same DTS-HD Master Audio 5.1 track as found on the Blu-ray edition. This is a fairly straightforward track, something one usually expects in a comedy/drama. Dialogue is clear and understandable, directed mostly to the center channel with some occasional panning effects as characters walk to the edges of the screen. Music makes up most of the surround channels, with atmospheric effects placed at appropriate moments to envelop the viewer in sound.

The UHD disc contains no special features whatsoever. Thankfully, Fox has included the Blu-ray release, which contains the following extras:

Joy, Strength, and Perseverance (1080p; 20:21): Director David O. Russell, actress Jennifer Lawrence, and the rest of the cast discuss their characters and making the movie.

Times Talk (1080p; 67:42): New York Times columnist Maureen Dowd sits down with writer/director David O. Russell and actress Jennifer Lawrence in front of a live audience to discuss the movie Joy, their careers, and working together.

Photo Gallery (1080p): A total of seven promotional stills from the movie.

I don’t understand why so many have panned this movie, as my colleague, Matt Hough, and I seem to be the only ones I know that appreciated Joy. It does take some patience as director Russell sets up his ensemble of characters, but once the story takes flight, it is an uplifting one. The decision to choose the UHD version over the Blu-ray is a tough one, with price likely to be the determining factor for most. 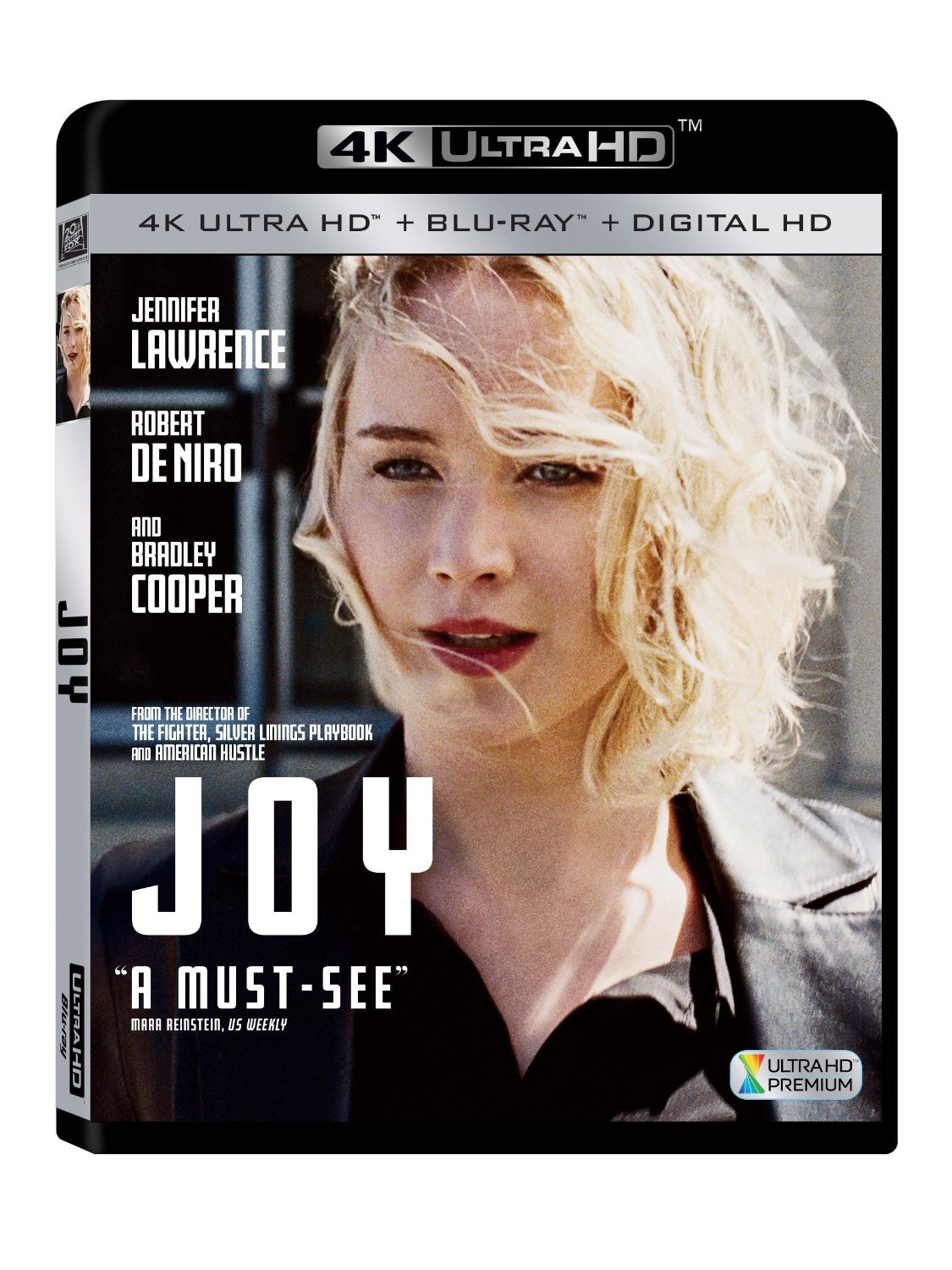