A great melodrama from the Golden Era of Hollywood, William Wyler’s Jezebel offers a fascinating central character, an intriguing story of the Old South, and some of the finest acting of the period all in a beautiful high definition disc from Warner Archive.

William Wyler has captured the moonlight and magnolias melodrama of the Old South to perfection in Jezebel, a 1938 production that beat the similarly themed Gone With the Wind to the screen by a year and earned its leading lady an Oscar just as the latter film did for its female star. While Bette Davis’ glory years at Warner Bros. haven’t been much in evidence on Blu-ray as of yet, this Warner Archive release offers some recompense for her many fans bringing one of her most vivid and haunting characterizations to high definition life in a disc fully worthy of its star and her film.

Julie Marsden (Bette Davis), a spoiled, willful, and stubborn Southern belle, risks losing her on again/off again suitor with her impetuous and frivolous behavior. Engaged to successful banker Preston Dillard (Henry Fonda), Julie pushes him away with her arrogant and contrary ways, constantly challenging the status quo for ladies in 1852 New Orleans and leading to a scandalous scene at a major social event which ends their engagement and leads to his subsequent departure. When Preston eventually returns from New York and Julie attempts to win him back amid a raging yellow fever epidemic, she discovers that it may be too late.

Adapted from a 30-performance Broadway flop, the film’s screenplay by Clements Ripley, Abem Finkel, and John Huston is a sturdy piece of goods: melodrama of the highest order rooted in explicit character exploration. Julie Marsden is every bit as fascinating a central character as Scarlett O’Hara: selfish, vain, and determined to act on her whims despite societal conventions, often ignoring sage advice from those older and wiser, but unlike Scarlett, Julie pays dearly for her continual mistakes and missteps finally finding redemption in self-sacrifice once all of her wiles and chicanery only lead to unhappiness and even death to others. Director William Wyler in his first film with Bette Davis has given her a grand showcase on a silver platter: a real breathless star entrance on a feisty steed and arrival into a party in clothes that are counterpoint to everyone else, her ultimate humiliation at the Lympus Ball in her flaming red dress that so scandalizes New Orleans society (Wyler has the camera soar over the ballroom and through the swirling couples gradually clearing the floor in showing their contempt for Julie’s scoffing at convention, all the while Max Steiner’s glorious waltz sweeps us away in cinema’s greatest dance of mortification), her abject apology kneeling to her former love while her gorgeous white gown puddles around her, and climactic scenes in the bayou and on victim wagons being carted off to a Southern version of Devil’s Island. It wouldn’t be the last time Wyler serviced a leading lady so completely that an Oscar win was inevitable, but it’s nevertheless a breathtaking accomplishment.

Bette Davis always gave Wyler full credit for creating a vehicle that would not only offer her a chance for a great performance but also help fashion a movie that could establish her as a bonafide  box-office star which Jezebel did. But her performance is really something with all the fire she had shown in previous films but with a deep-seated sorrow and stillness that she was still able to tap into at this stage of her career. And she cleverly doesn’t makes Julie’s contrition too deep-rooted all at once. When we come back from a one year skip between the ball scene and the return of Pres to New Orleans, we think she has seen the error of her ways only to find that her old spite and ego rise to the surface again when she’s denied what she wants. It takes a series of real tragedies that finally help her understand the consequences that have resulted from the depths of her selfishness as she struggles to find ways to make amends. Henry Fonda is soft-spoken and reserved as Preston Dillard, attempting to navigate through the circuitous pathways of Julie’s temperament but eventually giving up and looking elsewhere for comfort. It’s a high water mark for George Brent, often a rather colorless leading man but here possessed with some fire and pluck to his persona as the rambunctious Buck Cantrell. Fay Bainter earned a Best Supporting Actress Oscar as Aunt Belle Massey, Julie’s often overlooked conscience figure, and Margaret Lindsay has some effective moments as Pres’ Northern bride quite unaccustomed to Southern means and manners. In smaller roles, Donald Crisp as Dr. Livingstone, Richard Cromwell as Pres’ brother Ted Dillard, and Henry O’Neill as Julie’s guardian General Bogardus all make excellent impressions.

The film’s original 1.37:1 theatrical aspect ratio is faithfully reproduced in this 1080p transfer using the AVC codec. It’s a gorgeous black and white image with solid black levels and beautifully crisp and clean whites. It’s also wonderfully sharp with excellent contrast and impressive shadow detail in later reels as the film’s tone significantly darkens. There are no age-related artifacts to spoil the image reproduction. The movie has been divided into 28 chapters.

The DTS-HD Master Audio 2.0 mono sound mix has robust fidelity for a movie of this age. There are no age-related problems with hiss, pops, crackle, or flutter, and the dialogue, gorgeous Max Steiner music, and appropriate sound effects have all been blended seamlessly into a single track.

Audio Commentary: film historian Jeanine Basinger offers an informative and well balanced commentary noting many of the primary actors (though Stymie Beard and Eddie Anderson oddly don’t get mentioned), analyzing scenes for their production design, wardrobe, and direction, and giving a nice overview of this period in Warner Bros.’ history.

A great melodrama from the Golden Era of Hollywood, William Wyler’s Jezebel offers a fascinating central character, an intriguing story of the Old South, and some of the finest acting of the period all in a beautiful high definition disc from Warner Archive. Highly recommended! 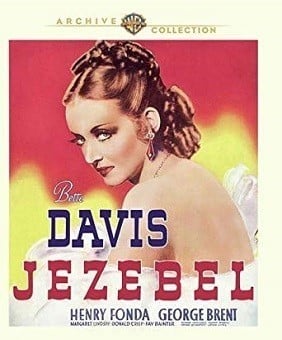