The highest-grossing movie of all-time (not adjusted for inflation), Avengers: Endgame, arrives on 4K UHD Blu-ray in a winning transfer, although the extras feel a bit on the skimpy side.

With a snap of his fingers, with assistance from the Infinity Stones, Thanos (Josh Brolin) achieved what he had set out to do – wipe out half the population in the universe. What remains of the Avengers are scattered, with Tony Stark/Iron Man (Robert Downey, Jr.) and Nebula (Karen Gillan) isolated on a ship drifting in space and the rest re-assembling at Avengers HQ, lead by Natasha (Scarlett Johansson), including Steve Rogers/Captain America (Chris Evans), Bruce Banner (Mark Ruffalo), Thor (Chris Hemsworth), Rocket (Bradley Cooper), and James Rhodes (Don Cheadle). Carol Danvers/Captain Marvel (Brie Larson) locates the drifting spaceship carrying Stark and Nebula and propels them to Earth. Once reunited, they come to terms with their failure while trying to find a way to reverse what Thanos did. All except Tony, who takes the defeat hard, and decides to live a life with Pepper (Gwyneth Paltrow) and raise a daughter. That is, until five years later when Scott Lang, who has been stuck in the Quantum Realm since the finger snap, re-emerges and comes up with a “time heist” plan using the realm he had just escaped from.

Avengers: Endgame satisfyingly brings the last ten years of films from the Marvel Cinematic Universe to a close using a time travel device that even the movie itself does not take all too seriously with lots of references to time travel “classics”, Back to the Future, especially when our heroes must return to certain points in the MCU timeline to pull off their so-called heist (liberally borrowing the idea of returning to previous movies from BTTF Part II). The screenplay by Christopher Markus and Stephen McFreely (who also penned all of the Captain America films and the previous Avengers: Infinity War) and direction by Anthony and Joe Russo (Captain America: The Winter Soldier, Captain America: Civil War, and Avengers: Infinity War) have made Endgame more character driven than previous entries in the Avengers series, and that is definitely one of the film’s plusses, as we the audience begin to say goodbye to some of these characters as the big showdown once again approaches. The inclusion of Hawkeye (Jeremy Renner) witnessing the loss of his family during a picnic that abruptly begins the movie (the scene was originally shot for Infinity War) is a nice and very brief recap of the outcome of the previous entry (without feeling like a “previously on The Avengers”) and the dark turn his character takes. It should be noted that the version presented here is the original theatrical cut and not the “let’s add some random stuff during the end credits plus a teaser for Spider-Man: Far From Home to best Avatar at the worldwide box office” re-release.

Avengers: Endgame was captured at 6.5k resolution in the 1.90:1 IMAX aspect ratio using the Arri Alexa 65 IMAX camera, then completed as a 2K digital intermediate (likely due to the extensive visual effects work) and presented here in a 2160p upscaled transfer with HDR10 color grading in the 2.39:1 aspect ratio used in its more traditional theatrical engagements. Personally, I don’t have a major issue with the aspect ratio, despite the fact that the IMAX presentations were 1.90:1 from beginning to end (as I’ve been told by those who were lucky to view the film in IMAX), since the movie was shot with a 2.39:1 “safe area” and the composition of those shots don’t appear overly cropped. There is a nice uptick in fine detail, particularly in the textures of our heroes’ costumes and beard stubble and other facial features. The use of HDR10 is not overdone, providing more controlled and natural (but not necessarily more vibrant) colors and stronger contrast that helps refine many of the movie’s darker (in terms of lighting) sequences.

Disney continues to be getting closer to fixing the problems many of their Atmos mixes for home release have suffered from. The movie required minimal adjustment to my master volume level from the moment the movie began. LFE is not as anemic as it has been on previous Marvel UHD releases from the studio (Thor: Ragnarok), with a nice robust low-end that comes close to loosening the floorboards. Surrounds are implored from beginning to end, with heights engaging when needed, providing a nice immersive listening experience. Dialogue is clear and understandable throughout.

As usual for Disney, the UHD disc contains no extras whatsoever. The package does include the 2-disc Blu-ray edition, where the special features can be found. Most of these are more retrospective in nature than a hard look behind the scenes, and I find that a bit disappointing.

Audio Commentary with Directors Anthony and Joe Russo and Writers Christopher Markus and Stephen McFreely: The four discuss, much like they did on the Infinity War track, the challenge of making the movie and bringing the series to a close.

Blu-ray Special Features Disc:
Featurettes (1080p; 46:00): Remembering Stan Lee has the famed comic book creator, who passed away last year, discuss his involvement in the MCU taken from archival interviews and interspersed with film and behind the scenes clips; Setting the Tone: Casting Robert Downey Jr. takes a look at the gamble that paid off in casting Downey as Iron Man back in 2008; A Man Out of Time: Creating Captain America looks at the core character of the MCU and particularly the Avengers series of films; Black Widow: Whatever it Takes looks at the character of Natasha and how she evolved from a supporting character introduced in Iron Man 2 to a team leader in Endgame; The Russo Brothers: Journey to “Endgame” looks at the involvement of the brother directing team from Captain America: The Winter Soldier to Avengers: Endgame; The Women of the MCU looks at the many strong female characters in the MCU and their convergence in Endgame; Bro Thor looks at the transformation of a fit Chris Hemsworth as the Mighty Thor to the unfit and depressed Thor (with assistance from a prosthetic fat suit) who must find his true worthiness again.

Deleted Scenes (1080p; 4:51): Six scenes are included – Goji Berries, Bombs on Board, Suckiest Army in the Galaxy, You Used to Frickin’ Live Here, Tony and Howard, and the somber Avengers Take a Knee.

The highest-grossing movie of all-time (not adjusted for inflation), Avengers: Endgame, arrives on 4K UHD Blu-ray in a winning transfer, although the extras feel a bit on the skimpy side. 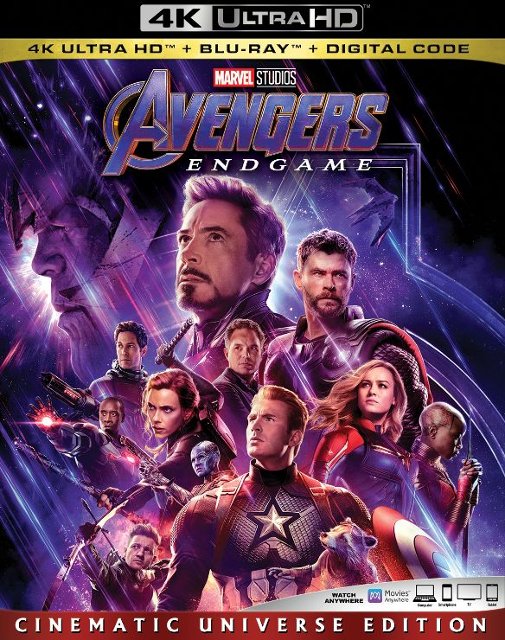