Forum List What's new Dark Style Change width
Log in Register
What's new Search
Menu
Log in
Register
Navigation
Install the app
More options
Dark Style
Close Menu
Posted on January 26, 2021 by Todd Erwin
You are using an out of date browser. It may not display this or other websites correctly.
You should upgrade or use an alternative browser.
Fascinating character study spanning four films 4 Stars

Well Go USA brings all four of the successful Ip Man films in one package with new 4K transfers and Dolby Atmos audio for the first three films in the franchise.

The Ip Man series of films looks at the life of legendary Wing Chun master Ip Man (Donnie Yen), who is probably better known in kung fu circles as the man who trained Bruce Lee. The first film establishes Ip Man’s sensibilities and moral compass as a man who has lost nearly everything including his palatial home after the Japanese occupation of China, living in near poverty and helping the workers at a cotton mill in his town stand up to not only a bullying gang trying to extort funds from the factory but also the Japanese General, Miura (Hiroyuki Ikeuchi), who enjoys seeing his soldiers beat up the Chinese locals in kung fu matches, with locals receiving bags of rice as long as they remain undefeated.

The second film finds Ip Man relocating his family to Hong Kong after World War II, trying to set up a Wing Chun school and facing not only stiff competition from other schools in the city, but from gangster Hung Chun-Nam, a kung fu master who is extorting protection money from all of the other schools in the city. Of course, Ip Man refuses to pay the protection money, and quickly finds his school and students in danger, forcing him to move the school inside the small apartment he shares with his son and pregnant wife. This is a much more action-based film than the first, with lots of fight sequences, including a showdown match between Ip and a British boxer (Darren Shahlavi).

The third film is something of a letdown, spending too much time on a subplot involving an American boxer, Frank (Mike Tyson), organizing underground fights in Hong Kong. You can read Cameron Yee’s review of that film here.

The fourth film centers on the remaining years of Ip Man’s life as he ventures to America after being diagnosed with stage four throat cancer to find a boarding school for his troubled son. You can read my more in-depth review of Ip Man 4 here.

Well Go USA has released all four IP Man films in this boxed set in the 4K UHD Blu-ray format with rather mixed results, all upscaled from their 2K digital intermediates with both HDR10 and Dolby Vision high dynamic range. The first film, Ip Man, was photographed on 35mm film, but looks the most processed of the four, unfortunately. Grain is very apparent, both natural and I’m guessing artificial as well, as some of that grain has no movement at times. Colors are very subdued, almost to the point of being black & white. The use of HDR does assist with better highlights and contrast when compared to its 1080p Blu-ray counterpart.

Ip Man 2, also photographed on 35mm film, shares some of the same attributes as the first film, with a more resolved but still overly noisy image. This is a more colorful film, and the wider color gamut helps these colors pop when needed for emphasis, although the film appears to have more of an orange overtone.

Ip Man 3 was captured digitally at 2.8k resolution on Arri Alexa XT Plus cameras. This is a dramatic improvement over the previous installments in terms of clarity and is much more colorful, although the film has an overall bluish tone to it. Detail is excellent, from the plaster backgrounds to intricate fabric textures of the costumes. Contrast is also excellent, with deep blacks that help Ip Man’s black outfit standout in some of the darker lit sequences.

Ip Man 4 was captured at 3.4K resolution on Arri Alexa Mini and XT Plus cameras. This is a mostly pleasing transfer, although some may argue that the contrast looks a bit blown out. This is likely an intentional artistic choice to provide a mid 1960s look, as the Blu-ray appears somewhat worse. Still, black levels are solid with no crushing while providing excellent shadow details. Clarity is top-notch, with fabric textures, facial pores, and background appearing razor sharp. The downside, though, is that some of the digital effects stand out more than I’m sure the filmmakers intended.

The first three films in the series have received Dolby Atmos upgrades to their native Cantonese mixes (Ip Man 4 was previously released on the UHD format with a Dolby Atmos mix). It is the first two films in the series that benefit the most compared to the DTS-HD MA 5.1 mixes found on their Blu-ray counterparts. These mixes are more immersive, using heights for atmospherics for the most part with sound cues travelling more seamlessly around the room. LFE also has a stronger presence in these new Atmos mixes. The new Atmos mix for Ip Man 3, though, is not all that much different from the DTS:X mix found on the accompanying Blu-ray. The overall soundstage sounds slightly wider and deeper, with stronger LFE presence.

The Dolby Atmos track for Ip Man 4 in the film’s original Cantonese (although there is a lot of English spoken in the film) is a real treat. The mix features subtleties like dialogue reverberation in the training hangar and school gymnasium, birds singing in quiet outdoor scenes, street noises, etc. Action sequences kick it up several notches, with thuds, crashes, punches delivering with sonic clarity. The score by Kenji Kawai is also spread out, often with strings in the front and percussion more dominant in the rears. LFE is adequate, but could have had a bit more oomph.

English dubs in DTS-HD MA 5.1 have been provided for all four films, but are not recommended. Also, each film includes an English subtitle track, it is only for language spoken in Cantonese (in other words, it is not an English SDH track).

The 4-movies collection comes in a nice canvas-textured flat black slipcase, with each film housed in its own 2-disc UHD keepcase. There are no special features to be found on the 4K UHD Blu-ray discs, with all special features relegated to their Blu-ray counterparts. Unfortunately, none of the additional special features included on the original 2-disc Blu-ray/DVD combo editions that were on the DVD version have been included.

Double-sided Mini-Poster: The poster has Ip Man on one side and Ip Man 4 on the other.

Ip Man Color Booklet: A collection of still photographs from the franchise plus an essay, Flex and Yen, by Calum Waddell.

Fans of both the Ip Man franchise and star Donnie Yen will want to add this set to their collection. 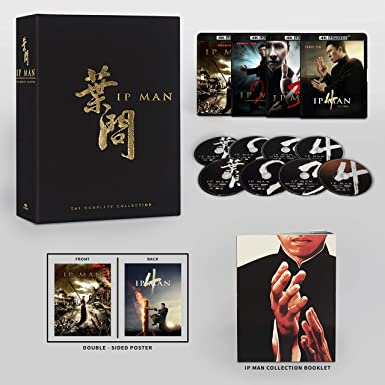