Like Ip Man's many opponents, the filmmakers should have left well enough alone. 3 Stars

While the kung fu master known for teaching Bruce Lee could have handled four to five challengers at once, the filmmakers behind this third installment of the Donnie Yen-starring Ip Man franchise aren’t so nimble when it comes to juggling stories. Taking on at least four distinct plots but fumbling through all of them, the film is, at best, a disjointed series of character vignettes and action set pieces. At worst, it’s an unnecessary follow-up that brings the trilogy to an uninspired close.

It’s 1959 and Ip Man (Donnie Yen) and his Wing Chun martial arts school continue to thrive in Hong Kong, a bustling city that draws its share of unsavory, foreign influences. The latest one to cross Ip’s path is Frank (Mike Tyson), an American businessman who organizes underground fights while maintaining some kind of shipping business in the harbor. Frank’s got his eyes on the school where Ip sends his son, and dispatches his ruffians to force the principal to sell the valuable property. Ip quickly takes up the cause, fighting off the first wave of thugs, and then standing guard over the school with his dedicated students and Cheung (Max Zhang), the father of one of his son’s classmates and a fellow Wing Chun practitioner. When Frank and his gang are ultimately thwarted, Cheung inexplicably turns on Ip in his bid to become the city’s premiere kung fu teacher and Wing Chun’s true grandmaster. Ip fighting to maintain that title quickly becomes irrelevant, however, as his wife Wing-Sing (Lynn Hung) falls ill, shifting his priorities from the martial to the marital.

There’s an interesting story wrapped up in the convolutions of Ip Man 3, but unfortunately it isn’t fully addressed until well after Ip’s gimmicky Mike Tyson punch out. From the beginning, the ex-prize fighter’s involvement in the film smelled like a publicity stunt, and the fact he appears early on, goes missing through most of the entire “save the school” plot, and then shows up for three-minutes of fisticuffs with the main character, only confirms it. Why the filmmakers thought the movie even needed Tyson is baffling, since the two previous films were worldwide moneymakers and audiences would have shown up for Yen alone. And if the filmmakers thought they needed a cameo, why wasn’t including Ip’s most famous student (played with just the right touch by Chan Kwok Kwan) considered enough?

There’s more substance to the film — involving Wing Chun’s effect on Ip’s family life and a yin/yang relationship with Cheung —  after the abrupt conclusion of the Tyson stunt, but considering there’s only a third of the film’s run time devoted to it means that promising substance never gets fully developed. Viewers in it only for the stunts and fights won’t give this a second thought, but frankly I’m tired of judging martial arts movies on a solitary standard. Based on a more complete view of what a movie should do and be, Ip Man 3 is undeniably sub par.

Framed at 2.40:1 and presented in 1080p with the AVC codec, the image features rich blacks, high contrast, and a somewhat stylized color palette that leans towards the cooler end of the spectrum. Detail is impeccable, if a little too crisp at times, though it never goes so far as seeming over-processed or sharpened. Likewise, there’s no significant noise or other digital artifacts in the picture.

Dialogue in the Cantonese 5.1 DTS-X audio track (which decodes as DTS-HD Master Audio on my older receiver) is consistently crisp and clear and well balanced with the front and rear channels. Surround activity is at times aggressive, with directional fight effects and film score cues having a spacious and seamless soundstage. LFE is deep and robust, giving the requisite heft to body blows and various stunts without seeming overblown.

A winning high definition presentation can’t make up for a disappointing final installment in Donnie Yen’s Ip Man franchise, which should have just stuck with a duology after all is said and done. Completists and devoted Yen fans probably won’t pass up the release however, especially at it’s current $13 street price. 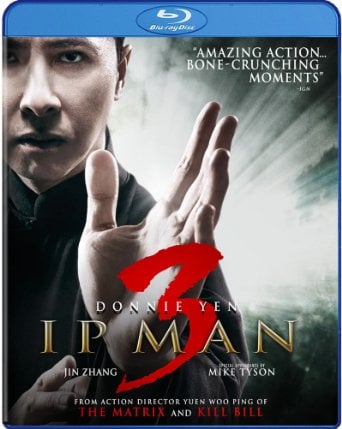