Donnie Yen returns in the (reportedly) last chapter in the saga of the man who trained Bruce Lee, Ip Man 4: The Finale.

Wing Chun Master Ip Man (Donnie Yen) has been diagnosed with stage four throat cancer after the loss of his wife in the previous entry. His son, Ip Ching (He Ye), has issues with controlling anger and has been expelled from school. Master Ip’s most famous student, Bruce Lee (Danny Chan), sends one of his own students to invite his former master and teacher to San Francisco to see him compete in a martial arts tournament. Knowing he does not have much time left, Ip makes the trip, hoping to find a school for his son to attend and get his affairs in order. However, Master Ip needs a recommendation letter from Wan Zong Hua (Yue Wu), the chairman of the Chinese Benevolent Society, in order for his son to be accepted at the private and exclusive Sullivan High School. Mr. Wan does not want to provide a recommendation letter to Master Ip because he along with his protégé Bruce Lee have been teaching Westerners the art of Wing Chun. But this is San Francisco, circa 1964, just before the United States would get involved in the Viet Nam conflict, and without that letter, Master Ip will face some tough discrimination, not only from immigrants in Chinatown, but US citizens as well. It just so happens that Mr. Wan’s daughter, Yonah (Vanda Margraf), is a student at Sullivan High, and is bullied when she is named lead cheerleader over spoiled brat Becky (Grace Englert), who happens to be the daughter of an agent with the INS. One of Bruce Lee’s students and a Staff Sergeant in the US Marines, Hartman Wu (Vanness Wu), is also being bullied by a Gunnery Sergeant, Barton Geddes (Scott Adkins), who isn’t too keen on teaching Eastern Martial Arts to his platoon, preferring Western karate.

If you’ve seen any of the previous entries in this series (Ip Man, Ip Man 2, Ip Man 3), then you pretty much know where this movie is heading, as Ip Man 4 follows the same formula of those films. Master Ip is a man who doesn’t like bullies, and feels it is his duty to stand up for those being attacked. This leads to many very exciting and well-choreographed fight sequences, one of the true highlights of the movie. Donnie Yen has a definite screen presence in just about everything I’ve seen him in (US audiences probably know him best as Chirrut Imwe in Rogue One: A Star Wars Story), bringing authenticity and often charm to his roles, and a real grace to his fighting. Where Ip Man 4 falters is in the piling up of coincidences in the story line, subplots that are introduced and then all but thrown away (the Bruce Lee subplot is barely more than a footnote), and many of the “American” actors perform their lines woodenly (but then again, does it really matter, since the film’s core audience would be reading subtitles for this dialogue?). The exception would be Scott Adkins as Sergeant Geddes, who belts out every line, yet his character is nothing more than a stereotype.

Ip Man 4 was captured at 3.4K resolution on Arri Alexa Mini and XT Plus cameras, completed as a 2K digital intermediate with Dolby Vision high dynamic range. The HEVC-encoded 2160p upscale on Well Go USA’s 4K UHD Blu-ray release includes both HDR10 and Dolby Vision flavors of high dynamic range (the disc was reviewed on equipment only capable of HDR10). This is a mostly pleasing transfer, although some may argue that the contrast looks a bit blown out. This is likely an intentional artistic choice to provide a mid 1960s look, as the Blu-ray appears somewhat worse. Still, black levels are solid with no crushing while providing excellent shadow details. Clarity is top-notch, with fabric textures, facial pores, and background appearing razor sharp. The downside, though, is that some of the digital effects stand out more than I’m sure the filmmakers intended.

The default Dolby Atmos track in the film’s original Cantonese (although there is a lot of English spoken in the film) is a real treat. The mix features subtleties like dialogue reverberation in the training hangar and school gymnasium, birds singing in quiet outdoor scenes, street noises, etc. Action sequences kick it up several notches, with thuds, crashes, punches delivering with sonic clarity. The score by Kenji Kawai is also spread out, often with strings in the front and percussion more dominant in the rears. LFE is adequate, but could have had a bit more oomph. An English dub in DTS-HD MA 5.1 has been provided, but is not recommended. Also, although there is an English subtitle track, it is only for language spoken in Cantonese (in other words, it is not an English SDH track).

All of the special features can be found on the included Blu-ray edition of the film. Unfortunately, there’s not a whole lot here to get excited about. All are in Cantonese with English subtitles.

The fight sequences and Donnie Yen’s performance help Ip Man 4: The Finale rise above its overstuffed plot. The 4K UHD Blu-ray presentation is excellent, despite its minimal flaws.

Saw it theatrically, and found it a vast improvement over #3, which spent far too much time on his wife's illness, not to mention the laughable inclusion of Mike Tyson, whose line readings are even more wooden than the Chinese actors'. I did find it interesting that Bruce Lee is presented as a real jerk, which would seem to validate Tarantino's depiction of him in OUATIH. Still, the series' apex remains #2, thanks to the inimitable Sammo Hung--both on and off-screen.

Yes, 4 is a definite improvement over 3, so it saves the franchise from a totally disappointing end. Insert my shameless plug of my review of Ip Man 3 here: https://www.hometheaterforum.com/ip-man-3-blu-ray-review/

I thought the depiction of Bruce Lee was better than in Tarantino's film. The actor who played Lee in Ip Man 4 also plays Lee in The Legend of Bruce Lee series that's on Netflix, and that series has the blessing (and production efforts) of the Bruce Lee family (namely daughter Shannon).
Reactions: Neil Middlemiss 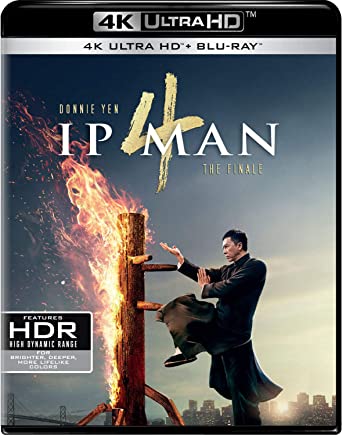