Forum List What's new Dark Style Change width
Log in Register
What's new Search
Menu
Log in
Register
Navigation
Install the app
More options
Dark Style
Close Menu
Posted on September 17, 2018 by Timothy Bodzioney
You are using an out of date browser. It may not display this or other websites correctly.
You should upgrade or use an alternative browser.
Highly Recommended with Qualifications 5 Stars

Terou Iishi’s intentionally provocative and unsettling adaptation of Edogawa Rampo’s The Strange Tale of Panorama Island plays like a cross between Erle Kenton’s Island of Lost Souls and Tod Browning’s West of Zanzibar.  Horrors of Malformed Men, brought to us in a beautiful transfer by Arrow films is another example of unpredictable Japanese genre filmmaking.  It is shocking, haunting, beautiful, as well as enigmatic, and for those looking for uncomfortable and challenging films, you won’t regret or forget seeing it.

Horrors of Malformed Men begins with a female scream in the dark.  We learn quickly that we are in an insane asylum, where amnesiac medical student Hirosuke Hitomi has been wrongfully committed.  In this opening scene Hitomi is attacked by a gang of female inmates, who all seem to be suffering from various forms of sexual illnesses, in a scene similar to one in Sam Fuller’s Shock Corridor.  After murdering a bald-headed man, Hitomi escapes and sets forth on a journey that reveals his identity (after exchanging identities with a dead man by the name of Komodo) as well as his destiny.

That premise could almost be the set up for a film noir or a western.  But Horrors of Malformed Men defies categorization.  It is a nightmare disguised as a horror movie.  Motivated by long repressed memories, Hitomi moves from one dream like scene to the next.  As he inches forward after encounters with a mysterious woman at a circus (in a scene that could be out of North by Northwest had it been directed by Fellini) and with a nearly blind, old masseuse, he inches closer and closer to an unnamed island and the truth.

Horrors of Malformed Men was produced by Toei studio in 1968.  It is based on the works of Edogawa Rampo, primarily The Strange Tale of Panorama Island with plot elements of other stories thrown in.  It was directed and co-written by Terou Iishi.  I am fascinated by Japanese genre film.  The more I see the more astounded I am.  I am not very familiar with Japanese history (film or otherwise).  Over the years, I’ve been tempted to research more, but like a child who doesn’t want the magician’s illusion ruined through knowledge I always stop myself.  I’m afraid that if I learn more about Japanese culture the films will lose their power to fascinate me, though I’m probably wrong.

There are two things that I find remarkable about Japanese genre films.  The first being that on one hand they do resemble American counterparts in that they are recognizable genre films – gangster, crime melodramas, horror, giant monster movies, juvenile melodramas, musicals, etc.  The difference is that post-code American studio films rarely stray from formulas once established.  The Japanese movies on the other hand, go all over the place often combining different stylistic as well as thematic elements from various genres thereby creating new genres in the process.

The second remarkable element is that it seems that all Japanese films are produced by the major studios no matter how transgressive the material or disreputable the genre.  While American studios always had exploitation product, crazy movies were produced outside of the system by the likes of Dwain Esper, H. G. Lewis, and Russ Meyer, but never distributed by major studios outside of Meyers two ill-fated films for Fox in the late 60s/early 70s – a brief period of experimentation at American studios.  It is unthinkable that American studios could have produced some of the movies produced by the Japanese studios particularly post mid 1960s – torture, Roman Porn, Pinky violent, and some of the Yakuza films.  We’re a long way from Sam Katzman and Albert Zugsmith.

American studio films nearly always operate on a literal level and those that do attempt to sustain a dreamlike quality such as Vertigo or Psycho usually have an authoritarian figure such as a doctor or cop ‘explain’ what we’ve just witnessed.  Hitchcock turns this convention on its ear with the almost comic explanation at the end of Psycho when he cuts to Norman and the swamp after the summation.  My interpretation for this is that Hitchcock is saying that there is no comforting explanation for the swamp of the human mind.  In The Birds audiences are frustrated because Hitchcock doesn’t even bother with an explanation.

Malformed Men operates entirely on a dream like level.  Like King Kong, the movie takes place in a world we recognize for the first 45 to 50 minutes.  Once we reach the island the movie shifts to a phantasmagoric state and doesn’t let up until Rampo’s recurring Sherlock Holmes-like detective, Kogoro Akechi reveals himself to ‘explain’ what we’ve just seen.  But Iishi pulls a Psycho and ends the film with an unforgettable bang that undermines Akechi’s pat summation.  While Akechi clearly understands the crimes committed by the characters, but he is out of his depth when it comes to understanding the Komodo family.

Malformed Men is going to inspire me to seek out more Iishi movies in the same way Tokyo Drifter started my Seijun Suzuki obsession over 20 years ago.  Iishi unlike Suzuki had a long career starting in the 1950s and climaxing shortly before his death in 2005.  It is heartening to learn of Iishi’s rediscovery by younger Japanese filmmakers of the 90s and 2000s.  Watching Iishi in Malformed Memories, near the end of his life, at work even under diminished circumstances is a pleasure as he clearly lived to make movies and is affectionately called the King of the Cults in Japan.

Among Iishi’s early hits were a series of Giant Superhero films produced in the late 50s, early 60s but released here to television, edited and combined and retitled, but known here by children of my age as the Starman movies.  These are available from Something Weird Video and Alpha, but I would love for someone like Arrow to license them from whomever hold the Japanese rights.  Iishi moved from studio to studio and genre to genre but unlike Suzuki enjoyed good relations with studio executives.  It’s worth noting that Toei encouraged Iishi to push the genre conventions, with this film as well as his torture films while Suzuki did so out of boredom and was punished severely by Nikkatsu.  Such are the fortunes of workplace politics.

I watched Malformed Men three times preparing for this review.  It is rich, mysterious, and unsettling.  I’ll go on a limb and say I believe that it is about traditional Japanese family dynamics and the male/female roles within the culture.  From the opening scream to the last scream that closes the movie, the film seems to be challenging the Japanese sexual power structure.

Malformed Men was pulled out of circulation by Toei shortly after its release in 1969 and has not had a video release in Japan.  It was not successful but was not pulled because of its commercial failure or content, but because the title itself is considered offensive in Japanese.  Only imported American versions are available in Japan!

One last thing, though I could go on for pages, must be noted about Malformed Men and that’s the performance of Tatsumi Hijikata as the deformed patriarch.  Hijikata was the leader of the Butoh dance movement and members of his troupe play denizens of the island.  With only make up on his hands Hijikata communicates pain and torment through movement.  His stylized gestures are the antithesis of naturalistic acting yet somehow is very effective because of its very theatricality.  It is an eccentric and spooky performance.  His introduction is so effectively staged that Iishi uses it twice.

This film is obviously not for everyone, but anyone with a taste for the grotesque combined with beautiful images should not miss this movie.

Arrow’s 2.35:1 transfer is a 2K restoration off of original element.  It is stunning.  There is a lot of visual experimentation involving black and white and color filters as well as distorting lenses and it all looks splendid.  The colors look much better in motion than any of the screen caps I’ve seen online.  All scratches and blemishes have been removed.

The uncompressed 1.0 PCM mono audio was also restored from original elements and it too sounds superb.  It is presented only in its original Japanese with the option of English subtitles.  The animal sounds used when Hijikata is introduced are very effective giving the viewer a sense of entering an animalistic society.

There are plenty of supplements:

There are two audio commentaries, one with film historian Mark Schilling that was ported over from Synapse’s earlier DVD release.  The second one is a new commentary by film historian Tom Mes.  Both are Japanese cinema experts who have written extensively on the subject.  Schilling’s commentary is actually sort of an interview/conversation with an unnamed (perhaps Don May, Jr.?) partner.  It is much more historically informative as Schilling knew and travelled with Iishi as he arranged an Italian retrospective shortly before Iishi’s death.  There is a lot of good information in the commentary.  Mes’ commentary is much more relaxed and impressionistic as he acknowledges the value of Schilling’s earlier commentary and concedes that it is futile to try and top it on its terms.

There is a new interview with co-writer Masashiro Kakefuda that gives a lot of background of the production of the film and his relationship with Iishi.  Kakefuda also talks about his long career writing Japanese genre films.

There are two documentary pieces also ported over from the earlier Synapse release:

There are three good essays in the included booklet:

Horrors of Malformed Men by Jaspar Sharp which deals exclusively with the film.  This is interesting because Sharp writes about what comes from Rampo and what comes from Iishi and the films and literature that inspired both.

Once Upon a Time in Japan: Terou Iishi (1924 – 2005) by Tom Mes which gives a brief but informative overview of Iishi’s life and career.

Remembering Edogawa Rampo (1894 – 1965) by Grady Hendrix explores the life and work of the famed Japanese writer.

With Horrors of Malformed Men, Arrow Films has put together another beautiful disc of what has been a difficult to see movie.  Granted, it is not for all tastes, but for those who like offbeat, genre mashing yet visually beautiful movies, it shouldn’t be missed.  Having already released Iishi’s Blind Woman’s Curse, one hopes that this is only the beginning of many Iishi releases from Arrow.  Bring on those Giant Supehero movies!

This sounds like an interesting curiosity. The giant superheroes, not so much.

Do not know how integral the doppelganger device is to this movie, but it is one of the tired old tropes that can ruin a movie. And Stinky's evil identical twin, Smelly Fitzwizzle, feels the same way.
You must log in or register to reply here. 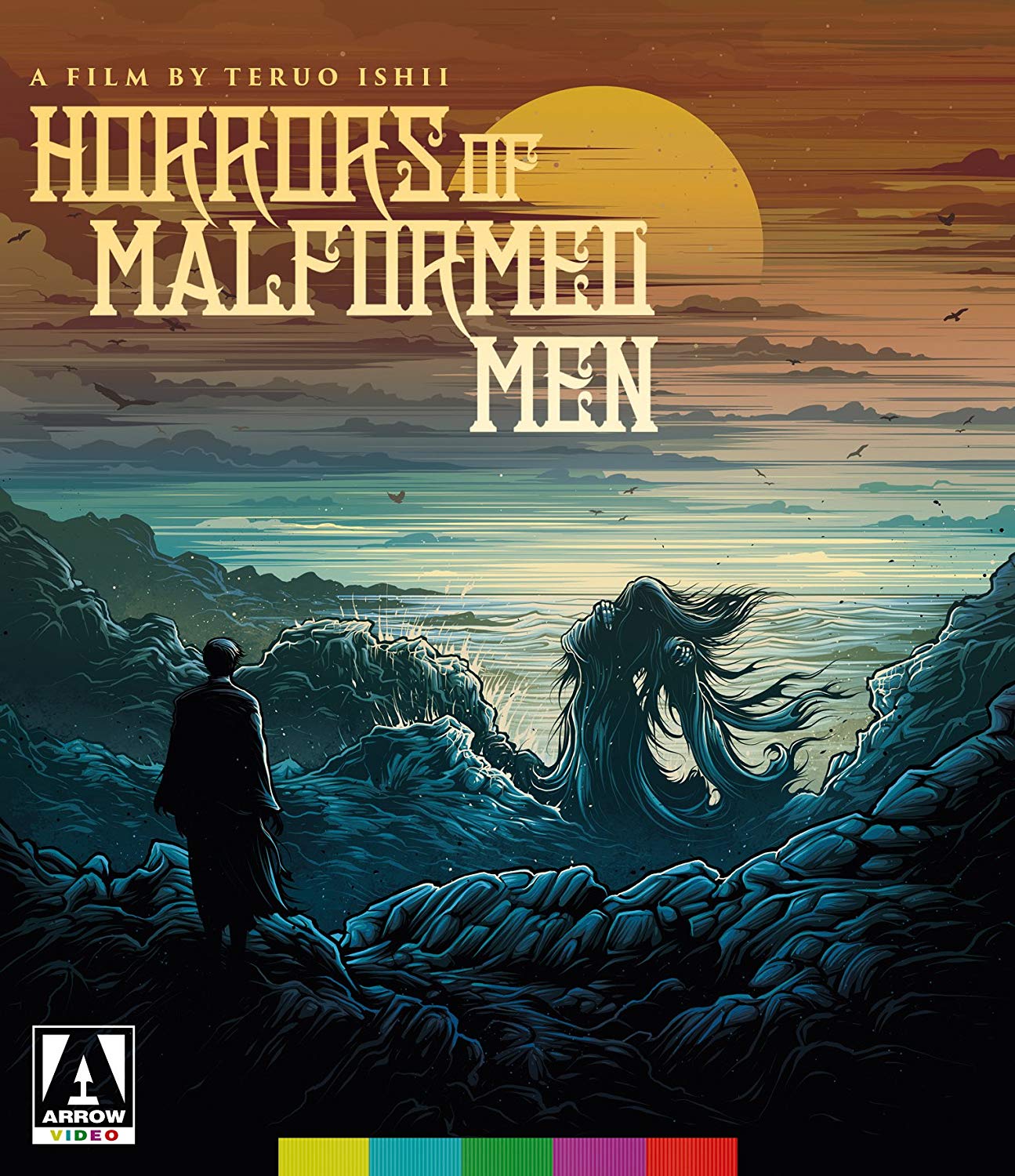