Despite the box office and Oscar winning success of A Man for All Seasons (1966), it would be several years before director Fred Zinnemann got behind the camera for another film, owing to issues with money and the decaying Hollywood studio system, which abruptly axed his next project – an adaptation of the novel Man’s Fate – just as it was about to start shooting in 1969 with MGM. When he did get back to filming, the result – an adaptation of Frederick Forsyth’s bestselling novel The Day of the Jackal – became an instant classic of suspense and reaffirmed his status as a master filmmaker. Now, Arrow Films brings this masterful gem of 1970’s cinema to Blu-ray in a wonderful release.

When France grants Algeria independence after a bitter struggle in 1962, the fallout is swift and sulfurous; many who had fought in the conflict or supported France in the endeavor viewed President Charles de Gaulle as a traitor for doing so. When the far right underground organization, the OAS, tries to kill de Gaulle in August 1962, it backfires massively, leading to the arrests of many in the organization and the execution of its leader by firing squad. With the remaining leaders of the OAS demoralized, nearly bankrupt and now in exile, they decide to try again a year later, but this time, they enlist the services of an assassin from the outside. Enter the Jackal (Edward Fox), a professional with an air of mystery that equals his brutal nature lurking under his seemingly placid service. He goes about his mission with brutal precision, but is about to meet his match in Claude Lebel (Michael Lonsdale), the man tasked with bringing him down, as their paths converge on Liberation Day in Paris.

Rooted in recent history yet also taking some liberty with the truth, The Day of the Jackal keeps the viewer engrossed in its serpentine plot from start to finish. A lot of that can be attributed to director Fred Zinnemann, who deliberately chose to tell the story in a straight forward, documentary-style fashion; while the end result may be well known to those who study the history books on France and de Gaulle, Zinnemann never tips his hand to the viewer, maintaining the deliberate pace in which the plot unfolds, showing the unrelenting manner in which both the killer and the authorities adopt in trying to accomplish their respective missions. Kudos should also go out to screenwriter Kenneth Ross – who manages to wrest a terrific script from Forsyth’s novel – and cinematographer Jean Tournier, who utilizes the locations in France, England, Austria, and Italy to great dramatic effect. The end result is like watching a master watchmaker put together a masterpiece with each piece of the watch working in near-perfect harmony, and Zinnemann – with such classics under his belt like High Noon (1952), From Here to Eternity (1953), Oklahoma! (1955), A Man for All Seasons (1966), and Julia (1977) – would certainly qualify as one of those watchmakers in cinematic form.

Although there are no star names or personalities in the movie (a deliberate choice on the part of the director), the cast that was chosen certainly fulfill the roles to great precision that it’s almost impossible to imagine anyone else inhabiting them. Edward Fox – hand picked by Zinnemann after seeing his performance in Joseph Losey’s The Go-Between (1971) – makes a terrific Jackal, equal parts charming and chilling, qualities that are on display in the scene where he kills a blackmailer threatening to derail his best laid plans. As Claude Lebel, Michael Lonsdale is a well matched counterpart, indistinguishable at first look but revealing an equally cunning nature that’s needed to find the Jackal. Delphine Seyrig, better known to cineastes for her work in the French New Wave classic Last Year at Marienbad (1962), makes a brief, yet memorable impression as the aristocat who falls for the Jackal, only to end up as a victim. Cyril Cusack makes an effective appearance as the gunsmith who furnishes the Jackal with the rifle he needs for his deadly mission. Barrie Ingham has a memorable bit as the two-timing presidential aide to General de Gaulle; he also provides the opening narration to the film. Other notable names and appearances include Alan Badel as the minister, Maurice Denham as General Colbert, Vernon Dobtcheff as the French Action Service interrogator, Derek Jacobi as Caron, Timothy West as the commissioner who recommends Lebel to head the Jackal investigation, Jean Sorel in a brief appearance as the ill-fated OAS leader Jean Bastien-Thiry, and Adrien Cayla-Legrand as Charles de Gaulle – on an interesting note, Cayla-Legrand bore such a striking resemblance to the late leader that some extras in the climatic Liberation Day Parade actually fainted, believing the actor really was de Gaulle.

The film’s transfer, taken from a scan of the 35mm interpositive, easily represents the best the film has ever looked on video, blowing the old non-anomorphic Universal DVD well out of the water. Grain is both sturdy and film like, with fine details rendered beautifully; the color palette is also strong with crushed blacks and even skin tones. Minimal instances of scratches, speckling, dirt and dust are present on the transfer, making this a high quality affair from Arrow.

The original mono soundtrack, sourced from a 35mm optical duplicate negative for this release, is faithfully preserved on a DTS-HD 1.0 Master Audio track. Dialogue is strong and clear along with the instances of source music and the brief underscore by Georges Delerue, which have strong fidelity and direction. Again, this represents the best the movie has sounded on home video.

In the Marksman’s Eye featurette (36:00) – Recorded in 2017, author Neil Sinyard analyzes the movie and Fred Zinnemann’s career in relation to it. The interview does give away important plot points, so please watch the movie first before viewing this interview.

Archival Clips from the set – Two brief clips taken from the behind-the-scenes footage shot during production. The first, Location Report (2:41), talks about the meticulous recreation of the Liberation Day festivities in the summer of 1963. The second, an interview with director Fred Zinnemann (2:52), shows the director sharing his thoughts about the project. Both clips are in French with English language subtitles.

Kenneth Ross screenplay (BD-ROM feature) – The complete screenplay to the movie is accessible through BD-ROM.

30 page booklet featuring essays by Mark Cunliffe and Sheldon Hall – Available on first pressing of the title, the booklet features cast & crew credits as well as notes on the transfer of the movie. The essays detail the history and legacy of the movie as well as the outcry that director Zinnemann and producer John Woolf had when the movie was edited for broadcast on British TV in 1982, respectively.

The convergence of a classical Hollywood director like Fred Zinnemann and the gritty realism of the 1970’s helped make The Day of the Jackal one of the best thrillers of the decade that left its mark and influence felt for years to come. Now that Arrow has seen fit to revive this movie in an excellent Blu-ray edition, the time has come to retire your old Universal DVD copy of the movie and pick up this edition with some solid complementary special features. Highly recommended! 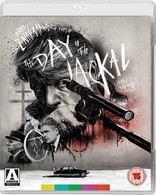