Forum List What's new Dark Style Change width
Log in Register
What's new Search
Menu
Log in
Register
Navigation
Install the app
More options
Dark Style
Close Menu
Posted on November 20, 2017 by Todd Erwin
You are using an out of date browser. It may not display this or other websites correctly.
You should upgrade or use an alternative browser.
Return of the buddy action comedy 4.5 Stars

Ryan Reynolds and Samuel L. Jackson have great chemistry in The Hitman’s Bodyguard, an action comedy that recalls the popular buddy films of the 1980s.

After losing one of his clients in an assassination, bodyguard Michael Bryce (Ryan Reynolds) is down on his luck, his triple-A executive protection agent rating stripped, forcing him to guard cocaine-addicted accountants running ponzi schemes from the crime lords he’s duped, and driving a Ford C Max instead of a more luxurious make and model. He blames his ex-girlfriend, Interpol agent Amelia Roussel (Elodie Yung), who has been tasked to escort expert hitman Darius Kincaid (Samuel L. Jackson) to the Hague to testify against former Belarusian dictator Vladislav Dukhovich (Gary Oldman), who is on trial for genocide, in exchange for his wife (Salma Hayek) getting a pardon and released from jail (we never find out what she is incarcerated for). There is a mole at Interpol, and the exchange goes sideways when the transport vehicle is ambushed by Dukhovich’s men. Amelia turns to Bryce, the only man she believes can deliver Kincaid in one piece safely. As luck would have it, these two have a history, with Kincaid attempting to take out Bryce on multiple occasions. Their hatred for one another, combined with Dukhovich’s men in hot pursuit, make this transport a bumpy ride.

The Hitman’s Bodyguard was a surprise late summer hit, and deservedly so. Reynolds and Jackson have great chemistry together, at first getting on each other’s nerves but ultimately gaining respect for one another as they save each other’s necks after several narrow escapes. Director Patrick Hughes (The Expendables 3) places a lot of humor in his action set pieces that complement the violence and mayhem, while keeping the film at a mostly even pace, with very few points where the film drags. One word of caution, though, as the film is loaded with expletives (Jackson, alone, includes close to 120 in his dialogue), although that did not necessarily bother me.

The Hitman’s Bodyguard was captured on a variety of different digital cameras (including Arri Alexa XT, GoPro Hero 4 Black, and RED Epic Dragon, to name a few) at 3.4k resolution and completed as a 4K digital intermediate with Dolby Vision HDR. Lionsgate’s 2160p transfer used on this UHD Blu-ray release includes both Dolby Vision and HDR10. My equipment is only capable of HDR10 playback, and the result is still worthy of five stars. Fine detail is excellent throughout, not just in close-ups of actor’s faces, but in wide vistas as well. Colors have more natural gradations, providing a more realistic look overall. Contrast is excellent with deep blacks and solid whites, although contrast does seem a bit off during the opening sequence, but that may be an artistic decision based on the director’s commentary track.

The Dolby Atmos track is a delight, with pinpoint placement of sounds during many of the action sequences, such as helicopters flying overhead and bullets whizzing by your ears. Quieter sequences use the heights for additional atmospheric sounds for added reality. LFE is strong, giving your subwoofer a chance to workout without being overbearing. Dialogue is clear and understandable, never getting lost in the mix.

As standard issue with Lionsgate titles, all of the special features have been included on the UHD disc.

Deleted Scenes (1080p; 4:44): Four scenes from the cutting room floor that can be played as one feature or individually; Call for Help, Get Ivan, A Leader Leads, and Making Plans,

Extended Scenes (1080p; 2:59): Four extended scenes that can be played as one feature or individually; Getting Out Alive, Is That Your Car?, I Live in this Building, and Welcome to Amsterdam.

Digital HD Copy: An insert contains a code to redeem a digital HD version of the film through UltraViolet partners.

The Hitman’s Bodygurd is a surprisingly entertaining action comedy that plays off the chemistry of its two main leads. Video and audio presentation are excellent, although the extras are a bit on the fluff side.

In due time, I'll be buying this disc. I thought this film was hilarious and laughed throughout it. Salma was particularly funny.

Of course it's loaded with expletives. Jackson pretty much owns the word "motherf-----." In fact, one of the biggest laughs in the film comes when Reynolds complains, "That's it! You've ruined the word motherf----- for me!"

Odd movie to rate PQ wise, some shots are soft, skin tones are all over, and there is a haze. Other shots (like during the boat chase) look GREAT. Felt the audio was real good, especially during the chases.

As far as the movie, it dragged, but man it had some funny parts, and the car/boat/foot chases were very good.

I didn’t see any haze, I did see areas of the frame mostly top and or bottom that were out of focus and just figured it was the filmmakers choice.
You must log in or register to reply here. 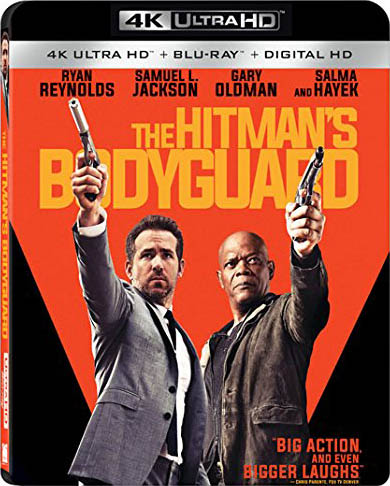