Forum List What's new Dark Style Change width
Log in Register
What's new Search
Menu
Log in
Register
Navigation
Install the app
More options
Dark Style
Close Menu
Posted on November 20, 2017 by Matt Hough
You are using an out of date browser. It may not display this or other websites correctly.
You should upgrade or use an alternative browser.
Moderately clever caper movie could have been better. 3 Stars

Going for a hillbilly variation on his own Oceans Eleven, director Steven Soderbergh’s Logan Lucky doesn’t quite manage to pull off the same kind of inspired caper film, but it boasts a fair share of downhome humor and a brace of amusing cameo appearances by stars willing to overact like fun to contribute to the general spirit of lunacy.

Going for a hillbilly variation on his own Oceans Eleven, director Steven Soderbergh’s Logan Lucky doesn’t quite manage to pull off the same kind of inspired caper film, but it boasts a fair share of downhome humor and a brace of amusing cameo appearances by stars willing to overact like fun to contribute to the general spirit of lunacy. If only the writing had been tighter and a bit wittier to make the most of this first-rate cast, Logan Lucky might have become the redneck version of The Sting.

After being fired unfairly from his construction job at the Charlotte Motor Speedway, West Virginia divorced father Jimmy Logan (Channing Tatum) decides it’s time the Logan family breaks its curse and comes out on the winning side for a change. He teams up with his one-armed brother Clyde (Adam Driver) and sister Mellie (Riley Keough) to steal money from the Charlotte Motor Speedway during the Coca-Cola 600 over Memorial Day weekend, his construction job there gaining him insight into how the millions of dollars there are moved around the site during a busy race. Jimmy also recruits incarcerated demolitions expert Joe Bang (Daniel Craig) and his slow-witted brothers Fish (Jack Quaid) and Sam (Brian Gleeson) to help them break into the track’s underground cash system. Even with a well thought out scheme, naturally things go wrong, and things don’t always look so sunny for the team, especially when a relentless FBI agent (Hiliary Swank) arrives on the scene after the fact to sort out the mysteries of the heist.

Rebecca Blunt’s caper script has lots of moving pieces (including cockroaches, gummi bears, bleach pens, and artificial salt) which involve not only the heist but which also detail breaking Clyde and Joe out of prison for the robbery and then managing to get them back into the correctional facility undetected. In order for all of it to work, however, there is a bit of dramatic license involving prison inmates that really doesn’t ring quite true (one of them gets rewarded later, but why should the rest of them have helped?), and just like in his Oceans series of movies, director Steven Soderbergh withholds vital information until after the fact to tie up loose ends and reveal essential pieces of the puzzle that were held back from some of the participants and the audience that make the seeming snafus actually become part of the plan. It’s a tried-and-true method of pulling off this type of caper scenario, but unlike The Sting where the audience felt satisfied and even exhilarated to be caught off guard and fooled along with the victims for part of the plan, the withheld information here just seems like a sneaky way of manufacturing anxiety about the plan going wrong. Soderbergh captures a goodly amount of local color with his attention to county fairs (with toilet seat horseshoe games) and local kiddie beauty pageants (a late-film sequence which is necessary to the plot but which goes on too long), and sometimes it’s not too clear whether the local yokels who make up the cast aren’t being made fun of with their constant malapropisms and skewed views of justice and righteousness.

Channing Tatum plays his West Virginia character pretty close to the vest without overdoing the downhome accent or behaviors and emerges as a loving father and a man much cleverer than his outward appearance and demeanor might suggest. Adam Driver is even more subdued assuming his deadpan demeanor might wring more laughs from the script, but he emerges as the film’s least interesting main character. Daniel Craig basically walks away with all of his scenes as the hard-boiled egg loving explosives genius, and his idiot brothers played by Brian Gleeson and Jack Quaid certainly do their part for hillbilly hilarity. An almost unrecognizable Seth MacFarlane pops in and out as a Cockney beverage manufacturer sponsoring a NASCAR entrant Warden Burns played by Sebastian Stan, stealing scenes left and right while only figuring marginally into the plot. Along with a host of actual NASCAR faces in cameos (Jeff Gordon, Kyle Busch, Darrell Waltrip, Carl Edwards, Brad Keselowski), lots of famous faces pop in with tiny to decent-sized roles including Oscar-winner Hiliary Swank as an enigmatic FBI agent on the trail of the missing money, Katie Holmes as Jimmy’s sarcastic ex-wife, Riley Keough as Jimmy’s helpful sister, and Dwight Yoakam as the smarmy prison warden.

The film’s theatrical aspect ratio of 2.40:1 is faithfully rendered in this 1080p transfer using the AVC codec. Sharpness is excellent throughout with lots of details to be seen in facial features, clothes, and hair. Color is rich and full-bodied without any problems with oversaturation. Contrast has been excellently applied for a very satisfying visual experience. Black levels are also outstanding. The movie has been divided into 26 chapters.

The DTS-HD Master Audio 5.1 sound mix is full-bodied but not quite as immersive as some other sound designs from recent heist movies. Dialogue has been well-recorded and has been placed in the center channel. The background score by David Holmes gets more of a surround treatment though it tends to reside more heavily in the front channels. Ambient sounds are also split between the fronts and rears thought they aren’t as emphasized as they might have been (a wreck during the NASCAR race could have had lots more impact).

Deleted Scenes (3:53, HD): two scenes may be selected individually or shown together.

Logan Lucky is an enjoyable caper film if not quite ranking with the best of the genre. A screen full of stars playing Southerners with laidback lifestyles add some variety to the usual slick heist moves in other films, but some of the droll approaches to the storytelling don’t always produce quite the desired results. Fans of the stars or director may want to rent rather than purchase, but the disc certainly is easy on the eyes in terms of visual quality.

Call me crazy, but I thought this was a lot better than Ocean's 11, which I always thought was a bit overrated. This movie has much more human and relatable characters, and the caper side was a lot more fun to follow. I'll be buying this on blu for sure.

Quirky and funny movie. I liked it, looked pretty good on UHD too.

gadgtfreek said:
Quirky and funny movie. I liked it, looked pretty good on UHD too.
Click to expand...

I watched it last night! Loved it!!!
I saw it in the theater as well!!

What a great soundtrack too!

I would have rated it higher myself. Closer to 4 than 3 in my opinion.

Edwin-S said:
I would have rated it higher myself. Closer to 4 than 3 in my opinion.
Click to expand...

This is the type of a film that might not work for everybody, more so than usual.

Robert Crawford said:
This is the type of a film that might not work for everybody, more so than usual.
Click to expand...

I liked it but admit that I thought/hoped it would be better. 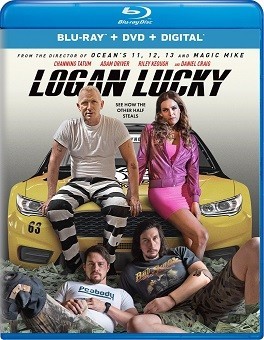