Visually stunning, and nothing more 4 Stars

Several attempts have been made to adapt F. Scott Fitzgerald’s “great American novel” The Great Gatsby for the big screen, and none have done it quite as splashy or flashy as Baz Luhrmann’s 2013 film. Unfortunately, as with many of Luhrmann’s movies, too much attention is made to the look of the film rather than its content, making for a visually stunning but emotionally empty film.

Nick Caraway (Tobey Maguire), a depressed alcoholic, relates to his psychiatrist the story of the most hopeful man he had ever met, Jay Gatsby (Leonardo DiCaprio), his neighbor when he was living in a small cottage next to Gatsby’s mansion on the North Shore of West Egg, just outside of New York City. Nick’s cousin, Daisy Buchanan (Carey Mulligan), lives with her husband, Tom (Joel Edgerton) across the bay from him. Every night, Gatsby throws elaborate parties where the elite show up to drink and dance the night away, in hopes of luring his lost love, Daisy, to his mansion to whisk her away from the philandering Tom. When Gatsby learns that Nick is Daisy’s cousin, he enlists Nick’s help in his endeavor. But there are many more mysteries behind Gatsby, and as they begin to unravel, so does Gatsby’s life.

Ron Epstein said in his review of the 3D Blu-ray release, “With so much emphasis placed on the film’s visuals it becomes apparent that if taken away, there isn’t much of a story left to keep one engaged. Furthermore, the audience never really has the opportunity to bond with the characters to to really care what happens to them.” And he is absolutely right (although he gave the film a high mark for its 3D imagery alone). I never connected with any of the characters in this film, never felt bad for the tragic ending for Gatsby, or cared about anything that happened to any of the major characters. The leading actors (DiCaprio, Maguire, Mulligan, Edgerton, etc.) were all fine in their performances, but the characters were vapid, as was the story. Yes, it was pretty to look at and listen to, but was tiresome to get through at almost 2 1/2 hours.

The film does earn its high marks in Baz Luhrmann’s visual style (The Great Gatsby won Oscars for Costume and Production Design), and it really shines on this upscaled 4K UHD transfer, which retains the film’s theatrical aspect ratio of 2.40:1. The colors are more vibrant, so much so to better replicate the exaggerated and heightened artificiality of the Roaring Twenties, thanks to the use of HDR. Detail is also increased, particularly in the wood grains in the floors and marble sculptures of Gatsby’s mansion, but also the lush grasses and trees surrounding Nick’s cottage. The deeper contrast also provides increased detail in darker sequences.

The UHD Blu-ray contains the same DTS-HD Master Audio 5.1 track found on the 1080p Blu-ray, which was a solid track three years ago. Dialogue is clear and understandable, never getting lost in the mix by music and sound effects. Music and effects are spread across all 5 channels, with LFE giving the jazz and jazz-influenced hip-hop tunes a strong deep end.

All of the Special Features can be found on the included 1080p Blu-ray copy of the film.

The Greatness of Gatsby (1080p; 9:14): Baz Luhrmann and his crew discuss the pre-production process.

“With and Without” with Tobey Maguire (1080p; 8:41): Behind the scenes footage shot by Tobey Maquire.

The Swinging Sounds of Gatsby (1080p; 12:17): The various artists discuss their inspirations and involvement in the film’s soundtrack.

Fitzgerald’s Visual Poetry (1080p; 6:55): How Luhrmann used 3D and superimposed text to help bring The Great Gatsby to the screen.

The Great Gatsby is another visually stunning film from the director of Moulin Rouge, and nothing more. The 4K UHD Blu-ray is a nice video upgrade from the 1080p, but lacks the true depth that the 3D version offered. 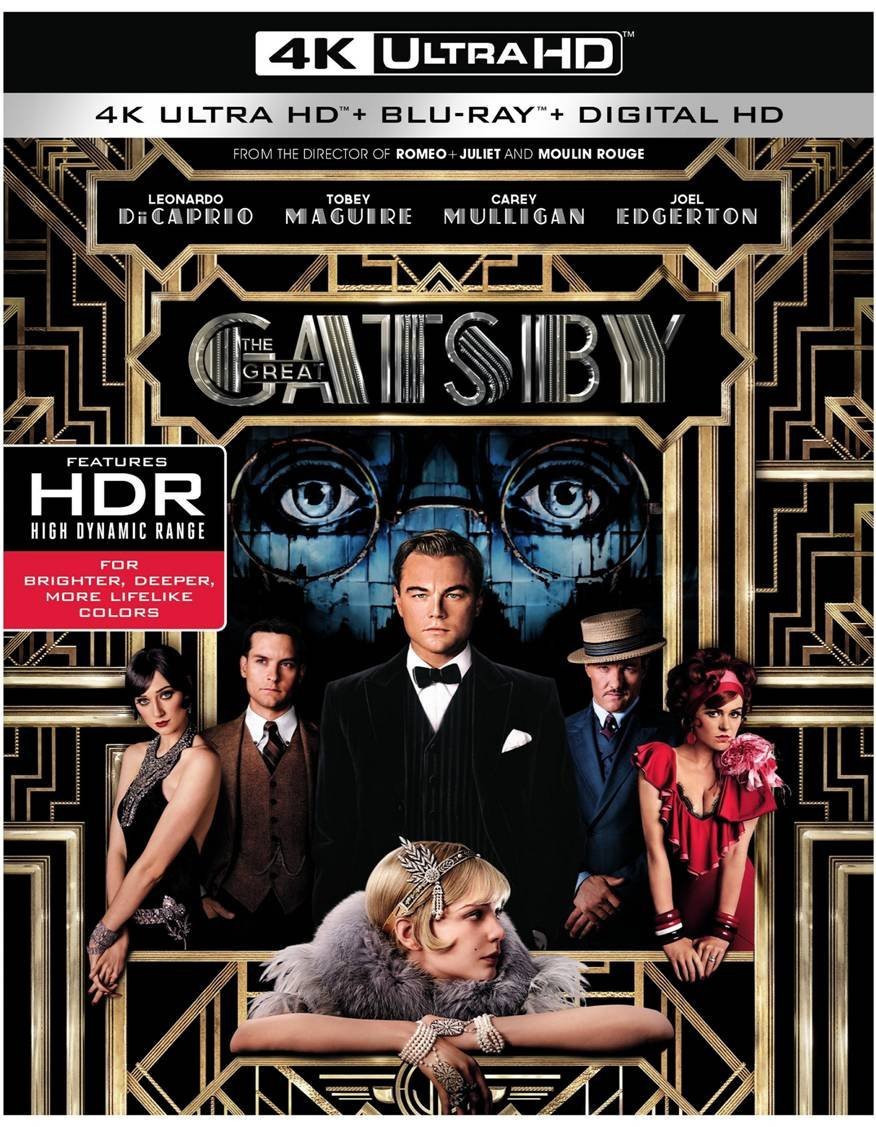