Forum List What's new Dark Style Change width
Log in Register
What's new Search
Menu
Log in
Register
Navigation
Install the app
More options
Dark Style
Close Menu
Posted on June 13, 2018 by Todd Erwin
You are using an out of date browser. It may not display this or other websites correctly.
You should upgrade or use an alternative browser.
The dawn of soccer, according to Aardman 4 Stars

Aardman Animation’s latest feature, Early Man¸ arrived with little fanfare in US theatres this past February, dwarfed by the runaway hit Marvel’s Black Panther and grossing just under $9 million domestically. Lionsgate brings the film to Blu-ray with an exceptional transfer.

I’ve been a huge fan of Nick Park since I first saw both A Grand Day Out (the debut of Wallace and Gromit) and his Oscar-winning short Creature Comforts in 1989 at the then annual Spike & Mike Festival of Animation at the now-demolished Mesa Theatre in Costa Mesa, California. Last Christmas, I remember seeing a trailer for Park’s latest film, Early Man, at a screening of Star Wars: The Last Jedi, then didn’t hear or see a thing, either on television or the internet, after that about the film, until I saw it listed under upcoming movies on Vudu this last April.

Early Man runs on the premise that the asteroid that supposedly killed off the dinosaurs also allowed pre-historic man to invent soccer (in a very silly yet very British montage). Over the years, one particular tribe, possibly due to their lack of intelligence, not only forgot about their ritual game of soccer but also never evolved. The tribe even finds hunting rabbits to be a challenge. That all changes when they are forced from their homes as a band of warriors from the Bronze Age, led by the evil Lord Nooth (Tom Hiddleston), take over their land to mine for bronze. Dug (Eddie Redmayne) wants to reclaim his home, despite the fact that tribal leader Bobnar (Timothy Spall) wants to try and make a go of it in the Badlands. Dug and his trusty pet pig Hognob (grunted by Nick Park) follows the warriors back to their home and discovers their passion for watching a team kick a ball back and forth on a field of grass, being cheered on by the spectators. When he is discovered, Dug challenges Nooth to a soccer match, and if his tribe is triumphant, Nooth will allow Dug and his tribe to move back to their home and live in peace. The problem is, Dug’s tribe has very little athletic skill, at least, until a young woman from the Bronze Age, Goona (Maisie Williams), agrees to train them in exchange for allowing her to play on their team.

The film is unmistakably Nick Park’s, in both its overall look and humor. Early Man does take its time to set up its major premise (the soccer match), a bit too long in fact that some younger viewers may tune out early before things really begin to pick up. Nooth is failry obviously an ancestor of Victor Quartermaine from Wallace and Gromit in The Curse of the Were-Rabbit, and the rabbits appear to be the same design from that film. Hiddleston’s line readings as Nooth are completely hilarious, and the messenger pigeon gag had me in tears. Early Man is not one of Park’s or Aardman’s best, but it certainly deserves better than what passes as family entertainment these days.

Early Man was painstakingly animated one frame at a time using characters molded from plasticene, and each frame was photographed at 5.2k resolution using the Canon EOS-1D X camera, then completed as a 4K digital intermediate. The only digital cleanup implored by the effects team was removing the seams where the different shapes of a character’s mouth were replaced to animate their voice and to remove rods that held items that were to appear suspended in air such as soccer balls. The 1080p Blu-ray presentation, replicating the film’s theatrical aspect ratio of 1.85:1, retains a great deal of fine detail up to and including the finger smudges in the animated figures. Colors are bold and vivid while contrast helps to provide deep blacks and bright whites. The opening sequence has intentional noise and simulated film grain as a way to differentiate it from the timeframe that the main story takes place. If only Lionsgate saw fit to release the film on 4K UHD Blu-ray here in the States…..

Ealry Man gets a fairly spiffy Dolby Atmos mix that uses the object-based functionality quite nicely. The opening sequence with the asteroid bearing down on Earth, the roars of the stadium crowd, even a very odd gag with a pre-historic giant duck all flow through the upper height channels with ease. Dialogue is prioritized nicely, always clear and understandable.

There is not much here, but what is here is, generally, quite good. I only wish Parks had recorded a commentary track,

Nick Park: Massaging the Funny (1080p; 8:47): The team at Aardman discuss the comedic aspects of the film.

DVD Copy: The film in 480p and Dolby Digital 5.1 audio, plus all of the above listed special features.

Digital Copy: An insert contains a code to redeem a digital copy through UltraViolet partners Vudu and FandangoNow.

While not necessarily Aardman’s best, it is worthy of fans to seek out this lost treasure that had the unfortunate task of opening opposite Black Panther in theaters. Video and Audio are excellent (although I would have liked to see this on 4K UHD), and the extras are above average.

This didn't seem to catch on anywhere in the world, as I think the total worldwide gross was only $49 million.

No prior Aardman film had ever come in below $100 million worldwide.
You must log in or register to reply here. 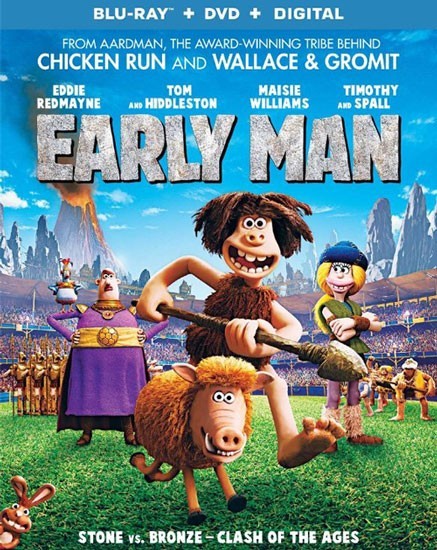