Forum List What's new Dark Style Change width
Log in Register
What's new Search
Menu
Log in
Register
Navigation
Install the app
More options
Dark Style
Close Menu
Posted on June 14, 2018 by Todd Erwin
You are using an out of date browser. It may not display this or other websites correctly.
You should upgrade or use an alternative browser.
A Bore in Time 3 Stars

Meg Murry (Storm Reid) is a troubled child. Her father, Alex (Chris Pine), disappeared four years ago as he and his wife, Kate, were on the brink of discovering a way to travel through space. Meg, her mother, and her brother Charles Wallace (Deric McCabe) believe that Alex found a breakthrough and has been lost ever since. Everyone else, including her fellow students and teachers, believe that Alex abandoned his family out of embarrassment from his preposterous theories, and effectively ostracizing Meg at school, pinning notes to her locker telling her to disappear like her father. One evening, the family is greeted by Mrs. Whatsit (Reese Witherspoon), a strangely dressed woman who tells them that the item Alex was looking for, a tesseract, is real. The next day, Meg and Charles Wallace are out walking the dog when they are met by a fellow classmate, Calvin (Levi Miller), who tells them he had an instinct to meet up with them. As they are walking, Charles Wallace enters a broken down house where they meet Mrs. Who (Mindy Kaling), who speaks only in famous quotes. Later that day, the two mysterious ladies are joined by Mrs. Which (Oprah Winfrey) in Meg’s backyard, and the three ladies whisk the three children off on an adventure to find Meg’s missing father and do battle with the dark and sinister IT.

A Wrinkle in Time is a movie that tries to engage its audience, perhaps too hard, and instead comes off as flat and boring, despite the film’s beautiful and colorful production design. I have not read the book the movie is based upon, nor have I seen Disney’s previous attempt to adapt the book into a TV movie in 2003. The film has some very talented people involved, from its cast to its production design, cinematography, composer (Ramin Djawadi), and director Ava DuVernay (Selma). The movie gets excessively dark shortly after the children arrive alone on Camazotz, with Charles Wallace becoming possessed by the IT, so I question its suitability as a family film. This film is truly a conundrum.

A Wrinkle in Time was captured at 3.4k resolution on Arri Alexa Mini and XT cameras, but IMDB is rather vague as to what resolution the digital intermediate was completed at, but does mention the use of Dolby Vision high dynamic range. Disney’s 4K UHD Blu-ray’s 2160p transfer retains the film’s 2.39:1 theatrical aspect ratio, but forgoes Dolby Vision in favor of using only HDR10 high dynamic range. The result is a simply gorgeous image with bold, vivid colors, especially once they begin “tessering” to other planets, thanks to the 10-bit color capability that is lacking on Blu-ray. Fine detail is nicely rendered, revealing textures in facial features and fabrics that were barely noticeable on Blu-ray. Black levels are exceptional, providing deep shadow detail without crushing, even when the image goes almost pitch black.

The default track on this disc is a Dolby Atmos 7.1.4 mix, and it sounds spectacular. Unlike the last few Disney UHD releases, this Atmos track doesn’t require one to really crank the volume to get the dynamic range and dialogue prioritization to sufficient levels. This is a very immersive track, using the heights to create a nearly full 360 degree listening area and providing more accurate locations for sounds. LFE is also robust without being overbearing, and dialogue is clear and understandable throughout. As usual, Disney has included a rather redundant Dolby Digital + 7.1 track, which is not as clear as the Dolby TrueHD 7.1 track that is part of the Atmos core.

As with nearly all of Disney’s 4K UHD Blu-ray releases to date, the UHD disc has no special features whatsoever. All of the special features can be found on the included Blu-ray version of the film.

Digital Copy: An insert contains a code to redeem a digital copy on Movies Anywhere, providing streaming version in UHD on Vudu and FandangoNow and HD on Amazon Prime Video and Google Play Movies.

A Wrinkle in Time was both a bore and a chore for this viewer, despite its beautiful imagery provided by its excellent video and audio transfer. If you are a fan of the film, this is the version to own.

Such a shame about the movie. My favorite childhood book.

I liked the movie more than Todd did, but it still has plenty of flaws. I was never bored by it and it had a couple of interesting visuals...

I don’t know if I can translate this properly into words but it felt to me that one of the film’s biggest failings was that it took for granted that we, the audience, would be blown away by the visuals and the pseudo-science. And that may have been the case if this movie had come out right when the book was released. But in 2018, CGI visuals and generic sci-fi concepts in and of themselves aren’t jaw dropping.

Before the film was released, I kept seeing the same promo clip at Regal theaters where the cast and director kept repeating that no one has every seen anything like this before. I think the opposite is true - we’ve seen these kind of visuals frequently. It’s not a problem that the film has CGI. It’s a problem that the filmmakers apparently didn’t realize how similar their film was to many others and acted as if they were the first to show us this particular trick.

Oprah looks so ridiculous in this that I cannot bring myself to watch it. Mindy and Reese don’t look much better.

My biggest problem is that it took Meg's journey, which was very specific in the book, and turned it into a very generic "girl power" empowerment story. In the movie, it is the absence of her father that causes her problems in school; in the book, it's her unconventional way of thinking -- being very bright but socially awkward, and arriving at answers correctly, but not getting there via the method being taught. In the end, it's her inability to conform that saves the day. That undercurrent is lost in the movie.

I also missed the religious overtones, especially when some profoundly moving Bible verses were replaced with some more flippant secular quotes that didn't make the point as effectively.

Loved the visuals, though, and I thought Reese Witherspoon and Mindy Kaling were terrific as Mrs. Whatsit and Mrs. Who -- and Deric McCabe was borderline miraculous as Charles Wallace.

Damn you guys. You’re gonna make me watch it aren’t you??

The greatest sin this film commits is thinking that Meg was the main character of the book, when it was actually Charles Wallace. All other mistakes (the plotholes, Calvin being pointless, Mrs. Whatsit being super annoying, etc.) all seem to stem from that initial one.

Pass...
You must log in or register to reply here.

UHD Review A Beautiful Day in the Neighborhood UHD Review 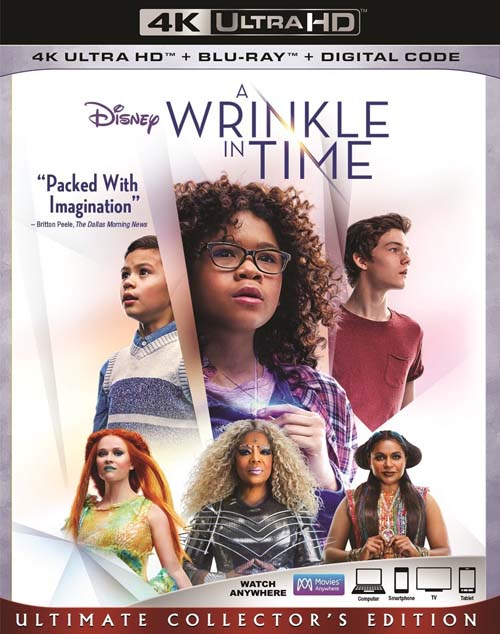