Forum List What's new Dark Style Change width
Log in Register
What's new Search
Menu
Log in
Register
Navigation
Install the app
More options
Dark Style
Close Menu
Posted on December 30, 2016 by Matt Hough
You are using an out of date browser. It may not display this or other websites correctly.
You should upgrade or use an alternative browser.
Engrossing courtroom drama based on a real case. 3.5 Stars

Denial might not quite be a riveting courtroom drama despite its real-life roots, but its themes are important and even in a less than top-notch presentation, it’s quite worth watching and considering.

Based on a true story, Mick Jackson’s Denial is a courtroom drama of more flash than substance. Dealing with one of the world’s most monumental tragedies (the Holocaust) and a libel trial that at its essence concerns the very fact or fantasy of the Holocaust’s existence, the movie offers some showy performances and some frustrating looks at the British legal system which, to American eyes, may seem almost comically inefficient. Buried somewhat beneath all the smoke and mirrors of the lengthy trial, however, is a hurtful and caustic attack on history and a warning that one must be vigilant against those who would confuse the truth with their perceptions of the truth which somehow in this reality show age turn their views magically into “facts.”

Emory Holocaust Studies professor Deborah Lipstadt (Rachel Weisz) finds herself the target of a libel suit brought in England by British historian David Irving (Timothy Spall) who claims the professor in her book Denying the Holocaust accused him of being an incompetent Holocaust denier. Thus, the suit in English courts demands that Lipstadt and her legal team prove the essential truth that the Holocaust occurred. Lipstadt’s publishers Penguin hires a crack legal team headed by solicitor Anthony Julius (Andrew Scott) and barrister Richard Rampton (Tom Wilkinson), but she is at odds with them from the start when they refuse not only to put her on the stand to defend her work but also deny any Holocaust survivors the chance to testify. Instead, they focus their attention on tearing down Irving’s scholarship thus proving his “facts” were deliberate falsifications to achieve his larger goal of protecting Adolf Hitler from persecution.

David Hare’s screenplay is based on Deborah Lipstadt’s account of the trial in History on Trial: My Day in Court with a Holocaust Denier, and while Lipstadt didn’t take the stand in her own defense, she certainly butts heads outside the courtroom with all manner of people who disagree with the way the trial is being handled (just as she does) and with the approach the legal team is taking. Throughout the eight-week trial (which cost an estimated £3 million), Deborah’s emotions run from hot to boiling taking the trial extremely personally instead of understanding it as an academic debate on real facts versus manufactured facts (a British Jewish enclave begs her to settle with Irving out of court because they fear she’ll lose the trial). As Rampton explains it to her in their most intensely dramatic scene, “What feels best doesn’t always work best,” so the outrage and insult she feels for not only herself but the millions of victims of the Holocaust must be sublimated throughout the trial (giving star Rachel Weisz great opportunities to fidget and pout as showman Irving pulls out his fulsome bag of tricks to deflect the truth and put on a show for the tabloids). One sequence, however, brings a sober, mortifying reality to the proceedings, wonderfully sustained by writer Hare and director Mick Jackson: a tour of Auschwitz in the foggy, damp dimness of morning. It’s simply amazing that these buildings, wire fences, and rubble can still exert such powerful feelings more than seventy years after their occupants were liberated.

Oscar-winner Rachel Weisz has done a fine job nailing down the Queens accent for Deborah Lipstadt, and her moments of quiet reflection (sometimes sitting with one of the Holocaust survivors who has begged her to be allowed to testify) are often even more powerful than her driving, forward assault on those with whom she doesn’t agree. She also has a very touching moment of remembrance during the Auschwitz sequence with historian Robert Jan van der Pelt (played nicely by Mark Gatiss) singing quietly to honor the dead. Timothy Spall gets the very showy role of historical con man David Irving, and he’s excellent with both the bombastic and more thoughtful sides of this calculating individual, but Tom Wilkinson’s quieter, more solicitous and unobtrusively forceful Richard Rampton is an even more galvanizing performance. Andrew Scott plays the charming solicitor Anthony Julius who famously got the generous settlement in Princess Diana’s divorce action, but it’s not quite the charismatic performance of a mesmerizing individual we’re constantly being told the character is.

The film’s 2.40:1 theatrical aspect ratio is faithfully presented in this 1080p transfer using the AVC codec. Sharpness is outstanding throughout with lots of detail in faces and hair textures. Color is well balanced with accurate skin tones and with a deliberate color timing of scenes in America having a different look with more saturated color than scenes in London and in other European locales. Contrast has been consistently maintained. The movie has been divided into 20 chapters.

The DTS-HD Master Audio 5.1 sound mix offers solidly recorded dialogue in the center channel. Howard Shore’s background score gets the complete surround spread through the fronts and rears, and atmospheric effects when present are very subtly mixed into the general aural framework of the movie.

Denial might not quite be a riveting courtroom drama despite its real-life roots, but its themes are important and even in a less than top-notch production, it’s quite worth watching and considering. The Blu-ray presentation is a first-rate endeavor in both picture and sound.

Watched Denial this evening- I found the story really well told with three excellent lead performances. I strongly recommend a viewing.
You must log in or register to reply here. 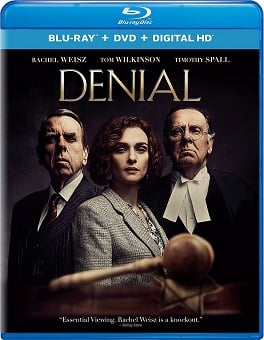