Forum List What's new Dark Style Change width
Log in Register
What's new Search
Menu
Log in
Register
Navigation
Install the app
More options
Dark Style
Close Menu
Posted on January 10, 2017 by Todd Erwin
You are using an out of date browser. It may not display this or other websites correctly.
You should upgrade or use an alternative browser.
Intense suspense drama 4 Stars

On April 20, 2010, the Deepwater Horizon, a semi-submersible offshore drilling rig, exploded in the Gulf of Mexico, causing the worst oil spill and disaster in U.S. history. Of the 126 crew members on board at the time of the explosion, 11 were killed. Peter Berg’s film, Deepwater Horizon, tries to document the events leading up to that event in what is an often intense and suspenseful disaster movie. Typical of the genre, the film features an all-star cast including Mark Wahlberg as Chief Electronics Technician Mike Williams, Kurt Russell as Safety Supervisor Jimmy Harrell, Gina Rodriguez (Jane the Virgin) as Navigation Officer Andrea Fleytas, John Malkovich as BP Executive Donald Vidrine, and Kate Hudson as Williams’ wife Felicia.

As the movie opens, BP is about to take over the drilling process from rig owner Transocean, but BP is running overbudget and behind schedule, and Vidrine is trying to cut corners to make up for lost time and money. This includes a very important test to ensure the stability of the underwater concrete holding the drill in place, which has been skipped as our three heroes arrive on the rig. Ironically, Jimmy receives a safety award for consecutive months of no incidents, even though Williams has just rattled off a long list of items in desperate need of repair or maintenance. The movie takes its time to relay expository information, much of it in techno babble, to try and explain what is about to happen and why. One thing I found particularly interesting is how the movie used real names of people and companies involved in the accident, and didn’t resort to changing those names in fear of possible lawsuits. It is even more interesting, considering how the movie puts much of the blame on BP, and especially Donald Vidrine. Malkovich portrays him as an unlikable weasel, and if this wasn’t based on a true story, his character would have probably been killed off by falling debris. Wahlberg is the real hero of the piece, as we follow his attempts to get most everyone to safety. Russell is enjoyable as the expert who gives the warning signs that nearly everyone ignores. Deepwater Horizon is one of the better disaster movies to come out of Hollywood in recent years, but I would not recommend watching it just before bedtime.

Lionsgate has released Deepwater Horizon on DVD, Blu-ray, and 4K UHD Blu-ray. Unfortunately, the studio only sent the Blu-ray/DVD combo for review. The 1080p transfer, compressed using the AVC codec, retains the films theatrical aspect ratio of 2.40:1, and provides an almost exceptional presentation. Colors are accurate and natural, never appearing over-saturated or washed out, especially flesh tones. Detail is also exceptional, displaying stubble growth on the lead actor’s faces and particles of grime and corrosion on the rig. Contrast is also very good, allowing for noticeable shadow detail in darker sequences with deep blacks that rarely crush and crisp whites that never clip. I did detect some banding issues, however, during some of the underwater sequences, that were mildly annoying.

Deepwater Horizon has one of the best audio tracks on Blu-ray so far this year with a reference-quality Dolby Atmos (with Dolby TrueHD 7.1 core) track that will rattle your walls and give your sound system a great workout. Explosions and falling debris come at you from quite literally everywhere. LFE is used substantially during the latter half during the destruction of the oil rig, adding emphasis to explosions and grinding metal. With all of this happening, dialogue still comes through crystal clear. I would not be surprised if Deepwater Horizon receives, at the very least, nominations in the sound categories at this year’s Oscars.

Captain of the Rig: Peter Berg (1080p; 18:15): Berg discusses his process, with help from other members of the cast and crew.

Deepwater Surveillance (1080p; 17:40): Small action cameras (such as Go-Pros) were installed on-set to obtain additional coverage, and that unused footage is presented here.

Participant Media Work Like an American (1080p): American Worker Tributes (16:03) takes a look at some of the actual workers from the tragedy, while I Am a Steel Beam (1:03) is a promotional piece about steel workers with narration by Peter Berg or Gina Rodriguez (you choose).

DVD Copy: the movie in 480p and Dolby Digital 5.1, trailers for Patriots Day, John Wick: Chapter 2, Hell or High Water, Hacksaw Ridge, and American Pastoral, plus the Bonus Features The Fury of the Rig, Deepwater Surveillance, and Work Like an American.

Digital HD Copy: An insert contains a code to redeem a digital copy through Ultraviolet partners or iTunes.

Deepwater Horizon VR: Not listed on the cover or included on an insert, users can go to the Google Play store or Apple App Store and download the app to view three sequences from the film in 360 degree VR with commentary.

Some may find Deepwater Horizon too intense, but there is no denying that the film is an ear-ringing audio experience that will test the limits of your sound system.

This movie is great.

Too bad the rental edition only has DD 5.1

Lionsgate is notorious for stripping lossless from rentals to get on to a 25gb disc. Always keep that in mind with Lionsgate/Summit.

Don't know if this is only happening to me. The Recent Articles column on the right is obscuring part of the review on the left. Enough is obscured to make it unreadable.

I'm using an iMac 27" Retina running Sierra.
You must log in or register to reply here. 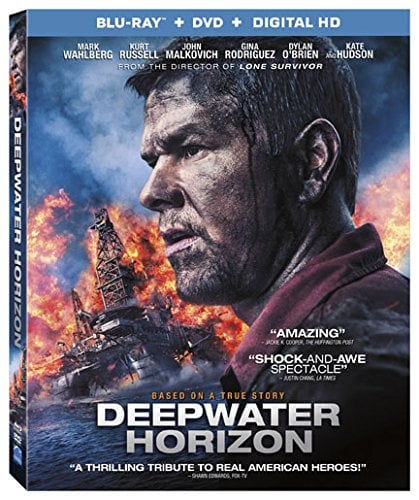