Direct to video sequels tend to get a bad rap (and usually for good reason). Warner’s Deep Blue Sea 3, while not quite a “good” movie, is slightly above average for what it is, a cheap thrill ride with very loose connections to its original.

Dr. Emma Collins (Tania Raymonde of Lost) and Eugene Shaw (Emerson Brooks of The Last Ship) are on their annual trip to the once thriving man-made fishing island of Little Happy in the Mozambique Channel, capturing data of the marine life and underwater diving videos for their blog. Their main purpose of being there is to collect and report on how climate change has disrupted this little island and how the marine life that has taken over its port is adapting. Assisting them are tech specialist Spin (Alex Bhat) and intern Miya (Reina Aoi). Emma’s former boyfriend, Richard Lowell (Nathaniel Buzolic, The Originals), arrives with a team that are hot on the trail of three bull sharks that have been terrorizing local waters. When the bull sharks begin attacking the great white sharks living around the island, Emma questions Richard as to what is really going on… Apparently, these three are descendants from the sharks that escaped the offshore lab in the first Deep Blue Sea movie. But Richard and his team aren’t hunting them for their predatory nature, they are trying to trap them so that the pharmaceutical company that owns the patent on these genetically modified sharks can better study them, no matter what the cost.

Is Deep Blue Sea 3 a good movie? Not exactly, but it does have its moments of sheer silliness and predictable yet over the top deaths, and at least tries to engage its audience (unlike most of Universal’s direct to video shlock, like The Car: Road to Revenge or Backdraft 2) thanks to a fun script by Dirk Blackman (Outlander, Underworld: Rise of the Lycans) and direction by John Pogue (The Quiet Ones) who knows not to take things too seriously. The leads are of higher caliber than what you see in most direct to video features, too, particularly Tania Raymonde, Emerson Brooks, and Nathaniel Buzolic. The CGI effects, though, are a weak point (as they often are in direct to video), with many shots of the sharks appearing almost too cartoonish than realistic. Also weak is the production design of Little Happy by Franz Lewis (Deep Blue Sea 2), which looks like a cross between the Waterworld Stunt Spectacular at Universal Studios Hollywood and the old Jaws: The Ride at Universal Studios Orlando (much of the third act feels the same).

Warner has released Deep Blue Sea 3 on a BD25, cramming the disc to the gills (pun intended) with this 100 minute action film plus bonus features and trailers, and it shows in the opening shot of the movie as the island of Little Happy appears somewhat pixelated as it comes into view and the upper portion of the screen in the same shot littered with mosquito noise. There is an overall softness inherent in the image, which may be either due to the low bitrate, a creative choice by the director, or both. Colors are vivid without appearing oversaturated. Black levels are a bit weak, appearing more as a dark grey with limited shadow details.

Warner has provided Deep Blue Sea 3 with a satisfactory and rather front-heavy DTS-HD Master Audio 5.1 track. Dialogue is clear and understandable throughout. Surrounds do kick in, but nearly as often as one would expect for a film of this genre. LFE, however, adds much needed emphasis to explosions, shark thuds, etc.

Deep Blue Sea 3 is an above average direct to video sequel but is hampered by a low bitrate Blu-ray presentation.

Apparently, these three are descendants from the sharks that escaped the offshore lab in the first Deep Blue Sea movie.
Click to expand... 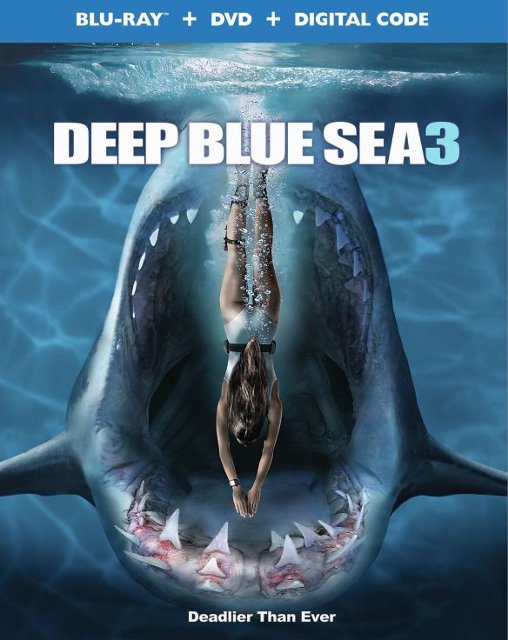