Engrossing look at the Tinsel Town of yore 4 Stars

Director Allen Coulter offers up an engrossing look at the Hollywood of more than half a century ago in Hollywoodland, a movie whose double-barreled construction works against its being as effective and as memorable as it might have been without the encumbrance of its fictional frame story.

The sad, enigmatic story of actor George Reeves in his last decade of life shown in counterpoint to the life of a cocky detective who’s investigating his death forms the focus of Allen Coulter’s Hollywoodland, an interesting and sometimes chilling look at the Tinsel Town studio system in its death throes. While the movie offers a crackerjack recreation of an era and features some splendid performances, the idea of split stories works against the film’s effectiveness: George Reeves’ story is intriguing and mysterious enough completely on its own.

The death of Adventures of Superman star George Reeves (Ben Affleck) in 1959 sends up red flags in hangdog second-rate detective Louis Simo (Adrian Brody) when he takes on investigating what the police have quickly called a suicide and closed the case. With conflicting evidence at the scene of the crime (the murder gun wiped of fingerprints: hard for a corpse to do, other bullet holes in the floor, and a 45-minute wait between the event and the call to the police), Simo has more than enough to keep him busy looking under various Hollywood rocks. Despite unrest in his own family with estranged wife Laurie (Molly Parker) and moody son Evan (Zach Mills), Simo plows ahead looking into Reeves’ personal life with an ex-mistress Toni Mannix (Diane Lane), her protective husband (who’s a head fixer at MGM) Eddie Mannix (Bob Hoskins), and Reeves’ brittle fiancé Leonore Lemmon (Robin Tunney) muddying the waters. He quickly learns that defying powerbrokers in Hollywood can be a detriment to one’s health.

Paul Bernbaum’s screenplay (with a major assist from director Allen Coulter) manages to make Reeves’ frustrating attempts to find Hollywood stardom in films much more interesting than the tedious and overly familiar domestic strife our fictional detective protagonist has with his exasperated wife and his increasingly distant son, the latter’s mood exacerbated by the death of his favorite TV superhero. One finds himself constantly anticipating the flashbacks to Reeves’ story of becoming a kept man in Hollywood even while starring in the low-paying Superman TV gig while hoping his lover Toni Mannix’s husband’s pull at MGM might land him something of substance at the town’s biggest studio instead of our enduring the tedious attempts to make something dramatically feasible out of the detective’s dreary personal life. Admittedly, the threats on Simo’s life give a momentary bump of content to his otherwise lifeless story (efforts to make some tenuous connection between Reeves’ hard-fought struggle to make it in Hollywood with Simo’s equally lackluster success as a detective don’t really work), but it’s really George Reeves’ tragic life that deserves all of the attention here. The screenplay offers several variations on Reeves’ final moments of life allowing us to see potential explanations of Reeves’ death other than the one offered up by the police, all wonderfully and evocatively filmed by director Coulter. He’s also managed to capture that long-faded glamour of old-time Hollywood with table hopping at Ciro’s and the luxury of dinner at the Cocoanut Grove as well as showing the primitive nature of the Superman TV production that George so grudgingly despised. There’s also that unforgettable heart-in-the-throat moment where George in his Superman costume is faced by a child with a real gun asking if he can shoot the Man of Steel to see the bullet bounce off him. Unquestionably the Reeves segments give the film its seeds of greatness.

Ben Affleck earned a Golden Globe nomination for his excellent work as George Reeves, and Diane Lane as the hungry-for-love Toni Mannix is equally fine, both actors displaying chemistry to burn in their scenes together both in love and out of it. Bob Hoskins makes a wonderfully sinister Eddie Mannix, tough and tolerant but not a man to be trifled with, and Joe Spano as Howard Strickling as MGM’s other Mr. Fix-It is also effective. Robin Tunney gets some showy moments as the crass Leonore Lemmon, my own personal pick for George Reeves’ assassin (TV’s Jimmy Olsen, Jack Larson, strongly disagrees despite Lemmon many years later admitting it in a drunken rage). Among many others doing sterling work in the film are Lois Smith as George’s mother Helen, Jeffrey DeMunn as George’s devoted agent, and Dash Mihok as an L.A. police sergeant with his own idea of the crime’s solution. As for the top-billed Adrian Brody, he’s seedy and rather off-putting as the cocky Louis Simo who gets taken down a few pegs in his relentless search for the truth. He’s not to blame for the film’s two-headed construction, but he’s unfortunately stuck in the movie’s ineffectual half.

The film’s 1.85:1 theatrical aspect ratio is faithfully rendered in this 1080p transfer using the AVE codec. The flashbacks often offer stronger color to depict the earlier, more glamorous Hollywood, but that’s a deliberate stylistic choice, and both halves of the story offer sharpness and a clean, clear image. Contrast is nicely applied throughout. The movie has been divided into 9 chapters.

The disc offers DTS-HD Master Audio soundtracks in 5.1 and 2.0 stereo iterations. In the surround track which is the default audio and the one used for this review, dialogue is always easily discernible and has been placed in the center channel. Marcelo Zarvos’ background score does most of the heavy lifting for the surround channels. The sound effects of the period have been woven in smoothly though they are lacking somewhat in punch.

Audio Commentaries: ported over from the earlier disc release, director Allen Coulter does a sterling job recalling the making of the film in great detail. New to this disc is film historian Bryan Reesman’s views on the movie. He offers up detailed credits for all of the major players and describes in depth locales in Hollywood and Toronto where the production filmed. He speaks sometimes so quickly in order to squeeze in everything he wants to say that he sometimes mispronounces names or gets names wrong, but those are insignificant nitpicks to the wealth of information he provides on the production.

Hollywood Then and Now (7:58, SD): the above named participants along with historians Rudy Behlmer and Jim Beaver (who has an unpublished biography on George Reeves), and actor Jack Larson comment on the changes in Hollywood’s manner of doing business from then to now.

Director Allen Coulter offers up an engrossing look at the Hollywood of more than half a century ago in Hollywoodland, a movie whose double-barreled construction works against its being as effective and as memorable as it might have been without the encumbrance of its fictional frame story. Recommended!

Nice review, Matt. I haven’t seen this since it first came out but I recall having the same reaction - the fictional story just wasn’t as interesting as the true one contained within, and it’s kinda stunning that no one on the filmmaking team realized that. I had a similar reaction to “Julie & Julia,” where that film’s Julia Child biographical segments were outstanding but the present day story about a blogger reading her cookbook was an unnecessary distraction.
Reactions: Yeoman007, Peter Keller and Matt Hough

I've never seen this film and I can't make up my mind if I really want to. I'm always reluctant to buy a disc I'll watch only once.
Reactions: John Dirk

Robin9 said:
Thanks for the review.

I've never seen this film and I can't make up my mind if I really want to. I'm always reluctant to buy a disc I'll watch only once.
Click to expand...

I have to admit that I had only watched my HD-DVD of the movie only once or twice in all the years that I've had it.

Robin9 said:
Thanks for the review.

I've never seen this film and I can't make up my mind if I really want to. I'm always reluctant to buy a disc I'll watch only once.
Click to expand...

Same here. It is intriguing but I this is a case where a streaming alternative would be welcome.

John Dirk said:
Same here. It is intriguing but I this is a case where a streaming alternative would be welcome.
Click to expand...

It's available for rent and purchase on iTunes - in Canada, anyway.
Reactions: John Dirk

It's available on iTunes in the States as well.
Reactions: John Dirk

dpippel said:
It's available on iTunes in the States as well.
Click to expand...

I also found it on Vudu but I'm not crazy about their rental terms which are reminiscent of Divx. I don't always have time to finish a film in a single sitting and they only give you 24 hours once you start. iTunes gives you 48 hours so I guess that's the way I'll go.
Reactions: dpippel

This is a very perceptive review. I had exactly the same reaction when I saw it: George Reeves' story was compelling enough to warrant its own telling.
Reactions: Matt Hough and John Dirk
You must log in or register to reply here.
Share:
Facebook Twitter Reddit Pinterest Tumblr WhatsApp Email Link 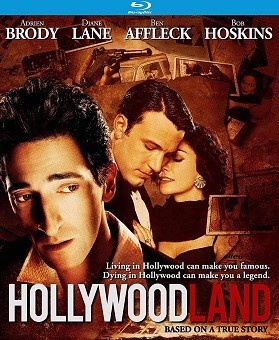