Posted on June 14, 2019 by Todd Erwin
The direct-to-video sequel misfires on all counts 2.5 Stars

Backdraft 2 is an unnecessary sequel that reaches way too hard to connect this arson mystery to Ron Howard’s original.

Like its predecessor, Backdraft 2 follows an arson investigator, Sean McCaffrey (Joe Anderson), the son of Stephen “Bull” McCaffrey from the original (seen in photos as Kurt Russell), who is trying to solve a string of arsons in Chicago. He is an investigator that doesn’t always play by the rules, and for that reason he is assigned a partner, Maggie Rening (Alisha Bailey), who has her own set of problems. Sean is visited from time to time in the film by his uncle, Brian (William Baldwin), who keeps inviting him to a family dinner to which Sean frequently declines. The leads in Sean’s investigation keep bringing him back to incarcerated serial arsonist Ronald Bartel (Donald Sutherland), who is nothing more than a lame attempt to make him a Hannibal Lecter-type giving tidbits of clues and red herrings here and there. As the investigation unfolds, Sean realizes he is not after a serial arsonist, but instead a potential terrorist cell (or something like that).

Backdraft 2 pretty much fails at every step. The fires are achieved more thru the use of After Effects than using actual flames. Toronto and Romania fill in for the windy city with the help of relatively cheap matte photography. Joe Anderson mumbles and grumbles most of his lines, the rest of the characters are not well drawn out, a character Sean meets briefly suddenly re-appears later on as if there has been a romance going on under the audience’s noses who just so happens to figure out a vital clue to the investigation. I could go on and on. Backdraft 2 is nothing more than a lone birthday candle compared to the original’s flame thrower.

Backdraft 2 looks very good on Blu-ray, so good, in fact that the movie’s cheap effects stick out like a sore thumb. Detail is strong, revealing nice textures in burnt wood, ashes, beard stubble on the firefighters, etc. Colors are natural and lean toward a warmer, orange-infused tone. Noise pops up here and there during night sequences, but nothing to really be obtrusive. Black levels are deep and inky, with minimal crush.

The DTS-HD MA 5.1 track is quite good, with a heavy LFE presence that aids in giving explosions (as fake as some of them appear) some good room reverberation. Dialogue is clear and understandable throughout, despite Joe Anderson’s mumblings.

There is really nothing here to see, other than a DVD and a Movies Anywhere digital copy of the film, so it is best to move along.

Backdraft 2 may have a nice presentation on Blu-ray, but the movie is a major flameout. 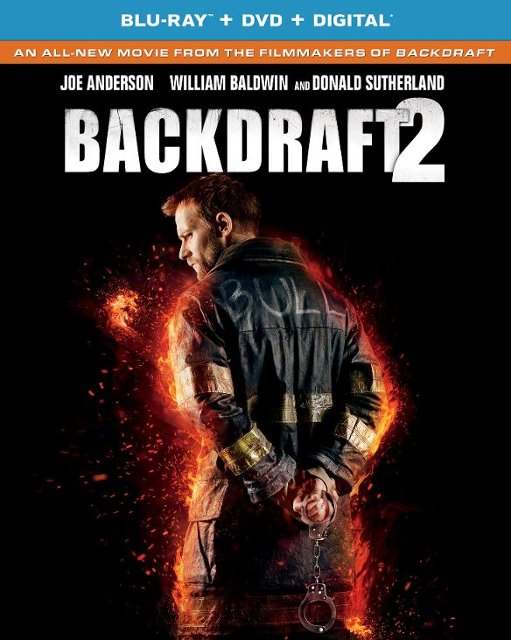