Forum List What's new Dark Style Change width
Log in Register
What's new Search
Menu
Log in
Register
Navigation
Install the app
More options
Dark Style
Close Menu
Posted on September 9, 2017 by Matt Hough
You are using an out of date browser. It may not display this or other websites correctly.
You should upgrade or use an alternative browser.
A sad excuse for a supernatural western 2 Stars

Director Roel Reiné brings yet another of his made-for-home video efforts to Blu-ray disc with Dead Again in Tombstone, a sequel to his 2012 supernatural western drama with the same star, Danny Trejo.

Director Roel Reiné brings yet another of his made-for-home video efforts to Blu-ray disc with Dead Again in Tombstone, a sequel to his 2012 supernatural western drama with the same star, Danny Trejo. It doesn’t matter, one supposes, that the movie doesn’t go anywhere near Tombstone nor that its narrative’s own invented rules for the leading character’s continual reincarnations seem continually ignored for no known reason. Whatever the case, westerns are such a rare commodity in the 21st century that fans of them may even endure this fairly shoddy effort.

Doing the devil’s bidding by sending as many nasty souls from Earth to Hell with his six-shooters in exchange for immortality, Guerro de la Cruz (Danny Trejo) ambles into Silver River where the sheriff (Joe Norman Shaw) lets him know quickly he’s not wanted. Guerro is there to see his daughter Alicia (Elysia Rotaru) and his mother (Michelle Rios), but they also have no desire to see him due to his long absence from their lives. Also in Silver River is Colonel Jackson Boomer (Jake Busey) who is under the impression that Guerro knows the location of a bone box which contains “The Devil’s Book,” a blueprint for bringing the forces of hell to work for its possessor. Guerro actually knows nothing about the book or its location, but his mother and daughter do, and so, too, does Dr. Goldsworthy (Dean McDermott), so it’s a battle of wills to keep the book out of the hands of the wicked Boomer and his treacherous posse.

There’s little rhyme nor reason to the screenplay by Ethan Wiley (story by Wiley and director Roel Reiné) in that the book so coveted by the bad guys has been hidden in such an impenetrable hiding place that taking it from there once it’s known people are looking for it is completely ridiculous. Even more ridiculous are the “clever” ways that are attempted to get it out of town: a decoy book on a stagecoach (doing that allows director Reiné the opportunity to have a stagecoach chase complete with runaway horses and a massive crash sequence) and giving the actual book to the one person (apart from Guerro) that the thugs are looking for, his daughter Alicia.  This is one of those movies where six-shooters never run out of bullets and fire continuously without needing to be reloaded, where the good guys armed with rifles and pistols can’t kill anyone of significance despite golden opportunities to do so while the bad guys have sharpshooter accuracy with their weapons, and where the film’s protagonist is blown up twice (he falls for the same booby trap set-up two times) and filled with lead twice and yet revives, not, however, by the devil’s powers Guerro allegedly sustains but by the intersession of Dr. Goldsworthy who, we later learn, reports to a higher power. Director Reiné overuses backlight to obsession (it becomes such a cliché after a while) and is even more generous with his use of slow motion which extends the running time of the movie a good ten or fifteen minutes. He also indulges in photographing lots of bare-breasted ladies and a three-way sex scene just because he can. There are three firefights: in the streets where Guerro faces down Boomer and his crew alone, in his mother’s saloon/café where at least Guerro has some help, and the climactic face-off where the town must fight against Boomer and his zombie army which he rouses from the dead once he gets control of the book, but all are staged the same way: fast editing and zooming pans that make it difficult to impossible to actually see what’s happening.

Apart from Dean McDermott who turns in an interesting, restrained performance as the enigmatic Dr. Goldsworthy and Elysia Rotaru who brings some fire and zip to the determined Alicia (though why she, alone in the town, must stand up to the hooligans is never explained; the citizenry far outnumber the bad guys), the acting ranges from rudimentary to just plain awful. Elizabeth Lavender as Boomer’s main squeeze, whorehouse owner Madame Du Vere, has dead eyes and a lackluster technique. To their credit, the three main antagonists Jake Busey as Boomer, Peter Skagen as his henchman Cravens, and Nathaniel Arcand as his scout Bull Dog don’t indulge in overacting their villainy (imagine how much scenery Busey’s father Gary would have chewed with this role), but in this kind of film, maybe some well-cured ham would have given it some life and spunk. With leading man Danny Trejo doing his usual non-acting and the script not making much sense, the movie certainly could have used something to bring it to life.

The made-for-home video transfer sports a 1.78:1 aspect ratio and is presented in 1080p resolution using the AVC codec. It’s superbly sharp (shot digitally on the RED camera) with every crack and crease in the leading man’s face easy to see. Color is nicely rich and full with accurate skin tones. Contrast has been applied consistently throughout the movie. Black levels are excellent. The movie has been divided into 20 chapters.

For a made for home video effort, the DTS HD Master Audio 5.1 sound mix is surprisingly full-bodied and aggressive. Bass rumbles deeply throughout the presentation, and ambient sounds like thunder crashing in the distance and gunshots during the battles have received a very pertinent placement. There is a lack of panning across or through the soundstage, odd when opportunities are so prevalent for its use, but the music is placed in the fronts and rears, and the dialogue gets the expected center channel placement.

Audio Commentary: director Roel Reiné and his film editor Radu Ion have a lively conversation about the making of the movie (they’ve worked together a dozen times) with anecdotes shared about the cold Calgary seventeen-day shoot and the good group of people lined up for the production. They’re joined occasionally on the phone by cinematographer Rolf Dekens, screenwriter Ethan Wiley, and head of Grid Special Effects Jan Goossen.

Home in Tombstone: Danny Trejo as Guerrero (3:47, HD): the star talks about how much he enjoyed making the first film and his enthusiasm for doing the sequel and is praised for his work ethic and cooperative nature by director Roel Reiné and fellow cast mates Elysia Rotaru, Jake Busey, Dean McDermott, and Elizabeth Lavender.

If you’re hungering for a new western (especially one with a supernatural bent), perhaps you might consider renting Dead Again in Tombstone, but this made-for-home video effort really isn’t worth your time unless you were a big fan of the original and want to see more of its hackneyed premise. 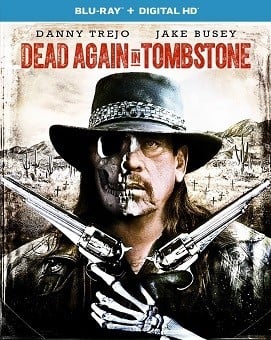