A group of young adults go on a weekend hike in the woods, only to find themselves the prey of an unknown creature in Animal, a horror film made for the Chiller cable channel that is better than it deserves to be. 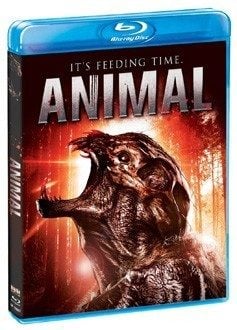 Five friends drive out to the woods, trying to relive their childhood by going on a weekend hike. There's the jock, Jeff (Parker Young) and his buxom girlfriend Mandy (Elizabeth Gillies), Jeff’s step-sister Alissa (Keke Palmer) and her quiet boyfriend Matt (Jeremy Sumpter), and fifth wheel Sean (Paul Iacono). The group soon gets lost in the woods, stumbling over a Marine’s backpack covered in blood, and find themselves being stalked by an unseen creature (that sounds like a velociraptor from Jurassic Park III). They eventually come across a cabin in the woods, where an older group of friends (Joey Lauren Adams, Thorsten Kaye, and Amaury Nolasco) have taken shelter after having been chased by the same creature. Tensions run high while they try to come up with a plan to elude the creature and make it back safely to civilization before the creature finds a way into the cabin.
Animal is a fairly by-the-numbers lost in the woods stalked by a creature story (anyone who knows me knows just how familiar this storyline is), and director Brett Simmons (Husk, Monkey’s Paw) manages to build some suspense and cheap scares into the film without going too over the top with gore. It also helps that Simmons has a very talented cast on hand, although I found Paul Iacono to be mostly annoying as the openly gay fifth wheel (who eventually has a secret to admit). My real complaint, though, is the creature, which does not get much screen time, possibly because when it does appear in its entirety looks too much like a guy in a suit. Animal is a quick, fun thrill ride that is better than it deserves to be.

Although originally made for the Chiller cable channel, director Brett Simmons and director of photography Scott Winig framed Animal to be viewed in the 2.40:1 aspect ratio. The 1080p AVC-encoded transfer provided to Shout! Factory retains that intended aspect ratio (even though the packaging states 1.78:1), and contains consistent and lush colors throughout and deep inky blacks that don’t crush. Detail is well-defined without any obvious digital tweaking, and compression artifacts are non-existent.

The disc includes a 5.1 and 2.0 stereo surround mixes, both encoded as DTS-HD Master Audio. The 5.1 mix is near-reference quality, with very active surrounds, especially when the creature is on the hunt. Dialogue is clear and understandable, directed mostly to the center channel. The track also has makes great use of the LFE channel with the creature’s calls and impact hits during its attacks.

Audio Commentary with Director Brett Simmons: Simmons provides a lively commentary on the making of the film, with lots of information on the locations, the creature, his cast, and getting the film completed on a short schedule and low budget.

Interviews with the Cast (1080i; 1:43): Nothing more than soundbites from the two female leads, Elizabeth Gillies and Keke Palmer.

Teaser Trailer (1080i; 0:32): Found-footage-style trailer for the Chiller cable channel.

A better-than-average made for cable horror movie with exceptional video and audio make for a fun, thrilling experience. With the exception of the director’s commentary, the extras are a little disappointing, but Shout! Factory once again delivers a solid package.

Sounds interesting, though the cover reminds me of the creature from "Feast".
L

Thanks for the review. I would have passed this up. After reading the review, I'll add to my list.