Wonderful talents have their time (and ours) and talents wasted in Nacho Vigalondo’s inconsequential allegorical fantasy Colossal.

Wonderful talents have their time (and ours) and talents wasted in Nacho Vigalondo’s inconsequential allegorical fantasy Colossal. Linking childhood traumas to future adult problems amounting to amateur psychology at the most primary level, the writer-director spends almost two hours trying to find comedy and drama in a basically toxic mix of ill-formed characters and fantastical situations that ultimately seems pointless and aimless.

A failed New York writer Gloria (Anne Hathaway) aimlessly spends her days boozing and feeling sorry for herself when her dyspeptic boy friend Tim (Dan Stevens) kicks her out of his apartment, so she crawls back to her parents’ empty homestead to get her life back into focus. She meets up with former school friend Oscar (Jason Sudeikis) who now runs a bar and offers her a part-time job there while also bringing by her house some leftover furniture and appliances to help her feel more at home. But Gloria begins to realize a rather strange occurrence: a direct connection between her and a monstrous alien that’s been terrorizing Seoul, first twenty-five years previously and now reappearing all these years later. And Oscar has a similar connection: his to a giant robot that’s also been making sporadic appearances in Seoul. Gloria and Oscar are connected by a childhood trauma happening with two dioramas they had made for a school project, and now their flinty personal relationship is being mirrored by these two monsters interacting halfway around the world.

Nacho Vigalondo’s premise for his screenplay seems to focus on the irony of two rather insignificant people with their tatty emotional baggage (unrequited love turned to careless and ruthless obsession) causing a huge physical and emotional toll on strangers in another part of the world. If the film’s tone were lighter or more satiric, the death and destruction might be simply shrugged off as part and parcel of the director’s goal, but there is seriousness afoot here leaving a very sour aftertaste after almost every scene once the movie reaches the halfway mark. In fact, much of the problem lies in that we have three leading characters (Gloria, Tim, and Oscar) who are basically dislikable people, so that their emotional turmoil becomes less and less interesting the longer the film runs, and events at the climax that are meant to be exhilarating or at least emotionally satisfying rate nary a shrug. The logistics of that ending don’t really work either once one takes a minute to consider what has gone before, but the premise itself is so ludicrous that thinking that deeply about it is probably a fool’s errand on its own.

The most ingratiating performances in the movie don’t belong to any of the three leads but to two supporting players, both friends of Jason Sudeikis’ Oscar: Tim Blake Nelson’s Garth (who has a cocaine problem) and Austin Stowell’s Joel, the pretty boy of the trio and the one with his own crush on the always-ready-to-party Gloria. Both take their small roles and make them human and worthy of our interest. Anne Hathaway’s Gloria is certainly a mess: soused most of the time and seemingly lacking much drive or ambition to do something other than goof off. Dan Stevens’ Tim is a prig (though we don’t really understand how much he’s actually put up with from Gloria during their time together), but he’s in the film so little that he really doesn’t get a firm chance to develop his characterization past a few tics and stammers. Jason Sudeikis is the real enigma as Oscar. Has his character always had an unhealthy rivalry/obsession with Gloria, or is it simply that he must dominate everyone within his inner circle even to the point of causing them harm? The writing here is so terse that connecting psychological dots is nearly impossible, but Oscar’s slowly growing sense of empowerment and an uneasy mania to be obeyed become so reckless and desperate by the end that any sense of larkish fun we have had from the film’s early scenes dissipates completely by the end.

The film’s 2.40:1 theatrical aspect ratio is faithfully executed in this 1080p transfer using the AVC codec. Sharpness is excellent throughout, and color is bold and bright where necessary but always under control with believable and appealing skin tones. Black levels are completely brilliant, and contrast has been consistently applied for a first-rate picture. The movie has been divided into 20 chapters.

The DTS-HD Master Audio 5.1 sound mix gets an excellent spread through the soundstage. Most of the dialogue has been placed in the center channel though there are instances of directional dialogue that give the sound mix extra luster. Bear McCreary’s background score and the various atmospheric effects get nicely threaded through the fronts and rears, and the Seoul attack scenes might not send the deepest bass through the subwoofer, but it’s pretty impressive nevertheless.

There is no denying that Nacho Vigalondo’s Colossal is unquestionably something unusual and unique. That his fantasy-allegory doesn’t quite work is a shame, but fans of the stars, the director, or those willing to give the movie a shot might wish to consider a rental. The Universal Blu-ray certainly offers the viewer a fine visual and aural package.

I think one of the problems of this film is that it was sold as a comedy. I found myself adjusting my expectations while watching. I did not like it enough to want a disc, but I liked it better than you did. I thought both Hathaway and Sudekis were very good.
Expand signature
Johnny
www.teamfurr.org
But a family cat is not replaceable like a wornout coat or a set of tires. Each new kitten becomes its own cat, and none is repeated. I am four cats old, measuring out my life in friends that have succeeded but not replaced one another.--Irving Townsend

This was one of my favorites of the year.
Reactions: Tino

Another viewer that really liked it.
Expand signature
...retired at last...and Ray Harryhausen at my side!!!


"Linking childhood traumas to future adult problems amounting to amateur psychology at the most primary level..."​
Sorry Matt, but you completely missed the boat on this movie. You're far from alone in that, of course. Most people seem to hate it, which isn't surprising. I tend to think that with such an odd, heavily metaphorical movie like this, you either go for the ride or you don't. It either resonates with your experiences, or it doesn't. If it doesn't, I don't know how it could be explained so that it does. In a way, it reminds me of the movie mother! The first time I saw it, I was unprepared and completely disoriented. But after thinking it through, it worked 100% the second time.

My wife and I loved this film. Thought it was hilarious too.
Expand signature
It's gonna be a hell of a ride. I'm ready. .
Reactions: TravisR

I saw it about 6 months ago and felt like I'd wasted my time. IMHO Matt was generous with a 2/5 rating.

I need to clarify my comments. I'm not criticizing whether anyone likes or dislikes a movie, but I think it's extremely important to actually understand it before writing up a critique of it. Unfortunately, this critique shows that it almost 100% missed the point of the movie. It's clearly a grand metaphor, and it's a severe mistake to try and take it literally. You mentioned that Oscar is an "enigma" but seem to take that as a negative. Yes, he is an enigma, and that may be the most real aspect of the movie...


He is a charming, humorous, raging, abusive asshole, and yes, he probably always has been. The world is filled with people who are exactly like him, so I'm confused why that seems so wrong. The charming, quirky part of him is present when he's getting what he wants, but he's really just a vicious gaslighter, and that comes out when things aren't going his way. When he's losing control, just like it does as soon as he realizes Gloria has hooked up with Joel. It's really quite textbook behavior. Gloria's boyfriend Tim is a variation of Oscar, and I'd wager her life is filled with Oscars and Tims.
This movie requires work from the viewer. I admit, I was puzzled by it the first time, but it kept tugging at me, and I eventually went back and watched it again. That second viewing couldn't have been more different for me than the first. The second time around, everything fell right into place. It all made perfect sense. And, it IS a comedy, even if the comedy is so viciously dark that it doesn't seem that way to everyone.

Mark Kermode's review of it is excellent, like his usually are. He even says that he didn't like it as he was watching it, but then it didn't go where he expected, and he ended up really liking the actual movie. It's definitely not for everyone,but for me, after some thought and effort, it's pretty awesome. 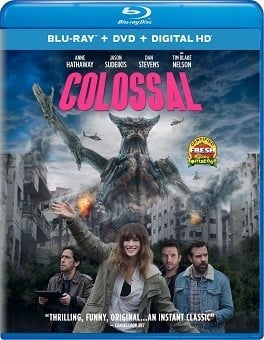