Having already won viewers’ hearts in the early 1930s as a Will Rogers comedy vehicle and in the lavish 1945 Rodgers and Hammerstein musical adaptation, the 1962 remake of State Fair offers a very starry cast, most of the tuneful melodies from the first musical version plus a few new tunes that aren’t half bad, and a sparkling production that tries to add a little spice to the homemade brew of the first musical.

Sadly, the third time is not the charm for Fox’s 1962 musical remake of State Fair. Having already won viewers’ hearts in the early 1930s as a Will Rogers comedy vehicle and in the lavish 1945 Rodgers and Hammerstein musical adaptation, this latest remake of State Fair offers a very starry cast, most of the tuneful melodies from the first musical version plus a few new tunes that aren’t half bad, and a sparkling production that tries to add a little spice to the homemade brew of the first musical, but the parts don’t jell as well this time out, and the overall effect seems more like a missed opportunity than a finely crafted new model of a classic.

It’s time for the Texas State Fair, and the Frake family is ready for anything. Father Abel (Tom Ewell) has his prize boar Blue Boy vying for top honors while mother Melissa (Alice Faye), having triumphed the year before with her pickles, is entering this year her mincemeat in hopes of gaining a blue ribbon. Son Wayne (Pat Boone), who’s going to be racing in the Gold Cup dirt track race, and daughter Margy (Pamela Tiffin, vocals by Anita Gordon) are leaving behind unsatisfying sweethearts (Linda Henirch, David Frandon) hoping to find the excitement of new romances at the fair, and they find them in carnival entertainer Emily Porter (Ann-Margret) and news reporter Jerry Dundee (Bobby Darin) respectively. So, while the fair brings some thrills either domestic or romantic to all the members of the Frake family, there are some disappointments along the way as well which allow the youngsters to grow up just a bit.

Richard Breen’s screenplay has taken all of the basics from the 1945 Oscar Hammerstein adaptation and embellished them with the car race and more musical opportunities for all of the cast. With the locale of the story changed from Iowa to Texas, this necessitated the elimination of one of the jauntier songs from the 1945 film, “All I Owe Ioway,” replaced with “The Little Things in Texas” which allows our older Frake couple to share a duet to balance the duet of the younger two couples to “It’s a Grand Night for Singing.” The remainder of the score from the first musical is intact: the round-robin title song, Margy’s dreamy “It Might as Well Be Spring” (the best staged song in the movie from director José Ferrer who mostly wastes the Cinemascope widescreen by framing everything in the center), and Wayne’s “That’s for Me,” though “Isn’t It Kinda Fun” has been given to Emily as a show-stopping, screen-melting production number. The additional songs Richard Rodgers has written are doled out to balance the songs for the entire cast: Melissa’s “Never Say No to a Man,” Abel’s paean to his hog “More Than a Friend,” Jerry’s “This Isn’t Heaven,” and a duet for Emily and Wayne “Willing and Eager.” The car race thrown into the last quarter of the picture features some good action and an unexpected result (Ann-Margret must have had déjà vu two years later cheering on her on-screen boy friend in yet another car race in Viva Las Vegas), but overall the film seems a tad long and the car race subplot could easily have been excised with no ill effects for the movie.

But the cast here is mostly excellent. Pat Boone’s mellow baritone retains its appeal, and his rendition of “That’s for Me” is exceptional. He also displays a lot more sex appeal here than he ever did in any prior movie (but opposite fiery Ann-Margret, it would be hard not to). Ann-Margret’s alluring Emily is another step forward in her screen career with her handling of her singing and dancing chores very proficient, and Bobby Darin’s cocksure manner and fine voice are assets for the smarmy TV reporter. Pamela Tiffin has pulled out a phony southern accent to use that doesn’t mesh with the accents of any of her family, and her character seems almost impossibly naïve. It’s great to see Alice Faye again returning to Fox after sixteen years away with her singing voice in fine fettle. Tom Ewell spends most of his time in the swine hut with Blue Boy, but he gets off some funny one liners, and while he’s barely able to carry a tune, he makes a more believably aged father to Margy and Wayne than Charles Winneger did in the 1945 version. Wally Cox makes a show out of a basically one scene role as the state fair food judge.

The film’s Cinemascope 2.35:1 aspect ratio is faithfully rendered in this 1080p transfer using the AVC codec. Sharpness is fine throughout, and colors are lush and bright with believable skin tones. There is a tiny bit of debris in the opening and closing credit opticals and one huge scratch down the center of the picture for a couple of seconds, but otherwise, time has been kind to this movie. The film has been divided into 24 chapters.

The disc offers two DTS-HD Master Audio soundtracks: 4.0 and 2.0 stereo. Dialogue and song lyrics get a more balanced placement in the 2.0 track though the spread of voices, music, and sound effects is professionally rendered in the 4.0 track, and it’s nice to have a choice. There are no age-related problems with hiss, crackle, flutter, or hum.

Audio Commentary: star Pat Boone reminisces fairly briefly about the film. Though he speaks fondly of all of his co-stars (though he seems ignorant that co-star Pamela Tiffin had a voice double for her singing) and director José Ferrer, there are very few memories shared about the actual filming. There is no mention of working with the great Alfred Newman recording the score (he does mention the new song Richard Rodgers wrote for him), but the track is mostly distinguished by very long pauses between comments.

From Page to Screen to Stage (29:51, SD): Richard Barrios, Tom Briggs, Ted Chapin, and others give the history of State Fair from its origins as a novel through three movie versions and the later stage adaptation.

Six-Page Booklet: contains some color stills, original poster art on the back cover, and film historian Julie Kirgo’s enjoyable and informative take on the movie.

State Fair, 1962 style, may seem old fashioned and a little slow, but you can’t beat the music performed by some of the very best singers of its era, and the Twilight Time Blu-ray release is a most welcome addition to fans’ Rodgers and Hammerstein collections. There are only 3,000 copies of this Blu-ray available. Those interested in purchasing it should go to either www.twilighttimemovies.com or www.screenarchives.com to see if product is still in stock. Information about the movie can also be found via Facebook at www.facebook.com/twilighttimemovies. 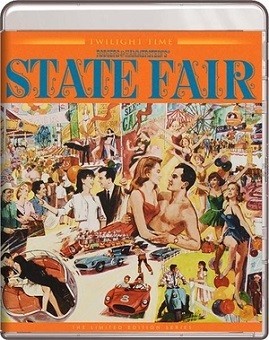