Forum List What's new Dark Style Change width
Log in Register
What's new Search
Menu
Log in
Register
Navigation
Install the app
More options
Dark Style
Close Menu
Posted on December 4, 2016 by Neil Middlemiss
You are using an out of date browser. It may not display this or other websites correctly.
You should upgrade or use an alternative browser.

In the history of animation, before the thick section dedicated to Walt Disney, Bray Studio’s is firmly planted and deservedly so. Without the pioneering work of Bray Studios, and founder John R. Bray himself, the evolution of animation might have been decidedly different and the treasures that come most easily to mind for most people – Mickey Mouse, Snow White and the Seven Dwarves, etc., might not be (or might not be quite the same). Everything most laymen enjoy about animation – at its most core – have origins at the Bray studios – and while this studio is not the source for all innovation and imagination in animation history, it is an enormously foundational and influential element. And Cartoon Roots: The Bray Studios Animation Pioneers, succeeds in reminding us of that.

John R Bray, a man with artistic talents of his own, founded Bray Studios in 1914 recognizing the desire for the cartoon animated form from audiences. Bray himself had a reputation for being tough and litigious as much as a pioneer in the early evolution of cartoon as an entertainment and art form, and this collection of 15 cartoons from the 1910s to 1920s. They feature an array of characters and intents and styles, from animation/live action hybrids and expressively playful types to educational shorts that demonstrated the potency of the form in conveying and explaining ideas in pleasing ways.

The influence and flow of imagination is ripe in this sample of works from Bray Studios. Bray, dismissively referred to as the “Henry Ford of animation” for his pursuit of turning animation creation into a production line, was no artistic hack. He produced cartoon strips of his own working for a newspaper and, inspired by imaginative animation that he’d seen, sought to produce his own. After disliking the first attempt (creating an animated version of his popular “Little Johnny and His Teddy Bears,”) he produced The Artist’s Dream in 1913 (also referred to as The Dachshund and the Sausage) which is included on this set. It blended live action sequences of an artist with his creation on the page, a dachshund hungry for some nearly out of reach sausages. It’s wonderfully clever and was painstakingly intensive to create, which helped spur the pursuit of a more streamlined approach to animation. One that would retain imagination but allow for a more factory-like production process, reducing the time and speed to market, improving the economics, and opening the door to an entire age of animated feasts for audiences everywhere.

Picking up the process patents (and attracting controversy through the years by trying to patent processes that were long in use, among other transgressions that would forever associate his name with that of pioneer and bully,) Bray Studios hired animators and quickly found success with works like Colonel Heeza Liar (represented on this set) and others that would cement Bray Studios as a true pioneer in animation.

Why This Release Is So Impressive

Animation preservationist and champion, Tommy Stathes, working with Kickstarter funding, sought far and wide to locate and preserve noted and historic works in animation. This release is a follow-up the original Cartoon Roots, which also featured classic silent animated works from greats such as Max Fleischer, Earl Hurd, Paul Terry, and Walter Lantz. Restoring these animated works is a true labor of love and the effectiveness of the efforts clear (see the below screenshot taken from the Kickstarter page below). Stathes and team delivered HD transfers at 2k resolution, commissioned new musical tracks for unscored original films, and I cannot imagine a better way to enjoy and appreciate these works.

Early animation is not just about the historic origins of a beloved entertainment form, but a chance to trace and examine the roots of what we find captivating about the medium today, even as the sophistication of the rendering (and the process by which it is created) are considerably more advanced. It is also the chance to recognize that even in its earliest form, animation can be just as captivating and just as marvelous as the computer generated wizardry that dominates the form today. 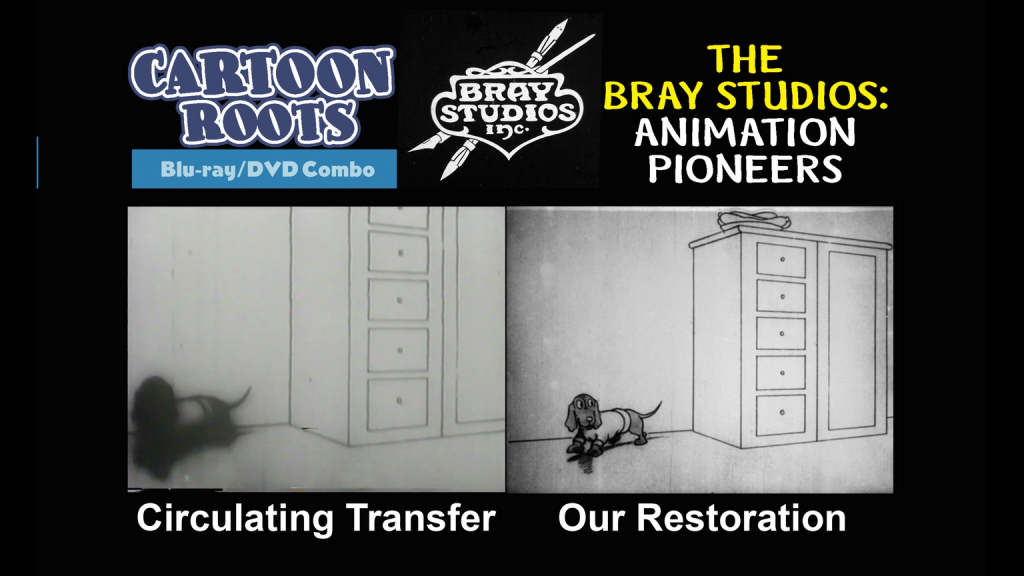 Given the condition of the original materials, the results on this Blu-ray are to be celebrated. There are different levels of damage and different levels of success to be seen in these 15 animated treasures. There are impressive black levels to be found in a number of them, including the delightful The Tantalizing Fly which featured the character that would later be known as Ko-Ko the clown (and is a fine demonstration of the rotoscoping animation technique). I am fond of the live action/animation hybrids as they are particularly imaginative and exciting – and they look terrific here.

This set showcases digital restorations of all the films, HD transfers at 2K resolution.

While some of the included cartoons were scored, many were not and now feature newly recorded pieces (by Robert Israel and Charlie Judkins) that work  surprisingly well. Fitting scores that represent the era and, perhaps more importantly, compliment the cartoons themselves, adding to the enjoyment of the individual pieces. The Dolby Digital audio is clean, clear and issue free.

A handsome collection of special features that include a behind the scenes view where you can read through some of the work undertaken to clean up and present this collection of historically significant animated works. We also get the 1956 J. R. Bray’s Citation, a short film recognizing Bray for his support of military training videos – wonderfully stiff but fascinating.

Perhaps my favorite special feature of all this is included is the rich booklet with wonderful details about each of the included cartoons and a fine introduction by Jerry Beck.

I’m no animation aficionado though I do have enormous fondness for the medium that began with Tom & Jerry cartoons as a child and continues today with an appreciation and love of Pixar and other magnificent animated films. But that fondness also thrives with a love of hundreds of small animated works from around the world that my 4.5 year old son finds on YouTube – many in different languages – but all generally singing the same handful of nursery rhymes and familiar children’s stories. He loves these short animated works and I love watching him love them. And so the potency of the animated medium continues to this day, in fascinating ways around the globe and to watch here a collection of animated works that tell helps us better appreciate the medium’s origins, is something to behold. It’s rewarding and will especially be so for lovers of animation old and new.