The Boston Strangler is Richard Fleischer’s masterful 1968 examination into the serial killings and subsequent investigation of the infamous thirteen-victim murder spree which terrified Bostonians and some of the rest of America for almost two years.

The Boston Strangler is Richard Fleischer’s masterful 1968 examination into the serial killings and subsequent investigation of the infamous thirteen-victim murder spree which terrified Bostonians and some of the rest of America for almost two years. Shot with an innovative approach to the storytelling and featuring a cast-against-type actor who was one of the country’s most affable light comedians as the title character, The Boston Strangler made a unique impression on filmgoers then, an impression which continues and even grows to this day.

The murder of an elderly Bostonian former nurse sets off a series of gruesome stranglings and mutilations in different districts of Boston so that eventually the state’s attorney general Edward W. Brooke (William Marshall) sets up a Strangler Bureau to centralize the investigation headed by John S. Bottomly (Henry Fonda). Though the head detective Phil DiNatale (George Kennedy) and his men had been concentrating their investigative efforts on the city’s underground network of perverts and unstable individuals, the epiphanies of psychic Peter Hurkos (George Voskovec) make them open to considering average family men whose outward seeming normalcy masked deep-seated problems below the surface. One such individual is Albert DeSalvo (Tony Curtis), a furnace repairman with a suspicious bite mark on his hand (the one surviving victim had bitten her attacker) who had been picked up for breaking into an apartment he thought was inhabited by a single woman only to find her husband present at the time.

Based on Gerold Frank’s best-selling book, Edward Anhalt’s screenplay and Richard Fleischer’s direction take a matter-of-fact approach to a serial crime spree which could have been exploited for the maximum in overheated melodrama and exuberantly gruesome violence. Instead, Fleischer in using a brilliant multi-frame approach to telling his story lays out aspects of the murders, the victims, the police, and the public’s reaction to the mounting body count that lets the images do all the talking without any need to glorify the violence or rub our faces in the sadistic qualities of the crimes. For the first hour of the movie, we see only brief shots of the killer’s hands, his voice over a building intercom, or his boots on some stairs only arriving at the aftermaths of the crimes when they’re found by neighbors or roommates. The concentration is on the investigations after the fact with an array of colorful suspects (including a gay man, a Don Juan wannabe, an unstable actor, and a man who is sexually aroused by women’s handbags) all with aspects of their personalities to hide but none of whom turns out to be the killer. When Tony Curtis’ Albert DeSalvo does make his first appearance as a father watching the John F. Kennedy funeral on television before heading out to find his next victim, we remain with him through a series of attacks as we see his modus operandi in action and understand to a certain extent how he got that series of women to open their locked doors to him. The film ends on a masterful series of confessionals as Albert and Bottomly work their way through his memories until (as the film breaks it down) his split personality finally emerges providing Tony Curtis the acting sequence of a lifetime (enhanced by filming his tour de force confession in a neutral-colored interrogation room to better allow the audience to focus on the actor).

It is a nice return to dramatic acting for Tony Curtis after pretty much abandoning the genre after Spartacus for a lengthy series of light sex comedies and farces, and by utilizing a light Boston accent and a careful approach to the troubled DeSalvo without overdoing facial tics or melodramatic mannerisms, he creates a portrait of a very disturbed and unpredictable man. Henry Fonda’s solid, dependable performance is par for the course for him, and George Kennedy works wonderfully together with Fonda in establishing a stable investigative team. Of the list of colorful suspects, the standout is most definitely Hurd Hatfield as homosexual Terence Huntley, a wealthy art patron who emerges as the screen’s first stable and grounded gay man (unlike the characters played by Tony Musante and William Windom, both almost freakishly agonized in the same year’s The Detective, also produced like The Boston Strangler at Fox). George Furth is an amusing Don Juan caricature, and William Hickey is unforgettable as the tortured man with the purse fetish. Sally Kellerman as the killer’s only survivor offers some commendable acting in her few scenes while Mike Kellin and Murray Hamilton are reliable as other police detectives. George Voskovec as the psychic is amusingly droll, and Carolyn Conwell is heartbreaking as DeSalvo’s supportive but horrified wife Irmgard.

The film’s original Panavision aspect ratio of 2.35:1 is faithfully reproduced in this 1080p transfer using the AVC codec. Sharpness is outstanding throughout with lots of detail in facial features and clothes (and one can see the join lines in the putty used for Tony Curtis’ nose build-up if he looks for it). Color is nicely rendered and completely controlled with realistic and appealing skin tones. Contrast is especially well integrated to produce a picture that’s free from dirt and all other era-typical artifacts. The movie has been divided into 24 chapters.

The disc offers both DTS-HD Master Audio 3.0 and 2.0 stereo sound mixes and both do a good job rendering the movie’s very imaginative sound design with both directionalized dialogue and music and other effects jumping between channels (including the center channel) as the various multi-frames on the screen open and close or shift emphasis. No age-related problems with hiss, pops, or flutter manifest themselves in these tracks.

Audio Commentary: historians David Del Valle and Steven Peros have another spirited and chatty track about the film and offer backstories on many of the participants that is well worth hearing.

Split-Screen Personality (22:21, HD): William Friedkin, who was the producer’s original choice to direct the movie, offers his analysis of the film and its performances as well as recounting the real story behind the slayings that have been altered somewhat in the movie.

Six-Page Booklet: contains some movie stills, original poster art on the back cover, and film historian Julie Kirgo’s illuminating essay on the film’s production and achievements.

One of the sometimes forgotten achievements of the late 1960s in terms of semi-documentary crime dramas, Richard Fleischer’s The Boston Strangler plays even more impressively now with its innovative multi-frame look and wonderfully direct and telling performances. There are only 3,000 copies of this Blu-ray available. Those interested in purchasing it should go to either www.twilighttimemovies.com or www.screenarchives.com to see if product is still in stock. Information about the movie can also be found via Facebook at www.facebook.com/twilighttimemovies.

Sounds like a fascinating movie. The subject matter is not my cup of tea, but you make a good case for it. And the picture quality sounds outstanding....

"The film’s original Panavision aspect ratio of 2.35:1 is faithfully reproduced in this 1080p transfer using the AVC codec. Sharpness is outstanding throughout with lots of detail in facial features and clothes...."
Reactions: ArnoldLayne and Matt Hough
P

My first two interests in viewing The Boston Strangler deal with childhood stuff:

A) I wasn't permitted to see the film at the age of 8, especially since it was a true story.
So, naturally, I wanted to see it even more; what with the preview having been seen at a matinee.

B) A friend of my father lived in a Boston apartment. Whenever he walked us into the building and through the vestibule; he would point out the glass of the second entry door, while placing his key within the lock. Just above the doorknob was a deep and well-worked semi-circular cut into the thick glass; going clockwise from the 12 to 4 O' Clock position, which was stopped short by the wooden frame of the door. Allegedly, because of the neighborhood he lived in, this was an attempted entry into the apartment complex, made by Albert DeSalvo. This family friend was a very pragmatic, studied and highly conservative individual; so, therefore, the story was never rescinded nor ever altered as the years ensued. Interestingly, the landlord never replaced the glass within this door; as it was, perhaps, either some kind of strange souvenir or a piece of history that remained permanent to this structure. To a kid, this was creepy cool stuff.

Anyway, I finally purchased The Boston Strangler, today. I had to, as Twilight Time had posted today that there were less than 50 copies remaining; and, believe it or not, I still have never seen this film. Not gonna miss out this time.
Last edited: Jul 31, 2019
Reactions: B-ROLL and JohnMor
You must log in or register to reply here.
Share:
Facebook Twitter Reddit Pinterest Tumblr WhatsApp Email Link 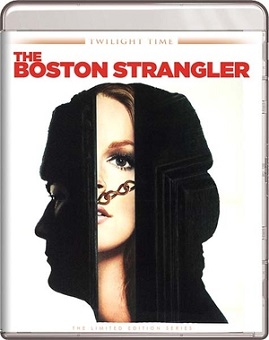