Posted on November 13, 2017 by Todd Erwin
Entertaining, but may alienate the younger crowd 4.5 Stars

In Pixar’s Cars 3, Lightning McQueen has to face the fact that his days as a racer are numbered as much younger racers are quite literally passing him by on the racetrack. This latest entry just about alienates its core audience by taking on themes that will likely whiz by a young person’s head.

To be honest, I’ve never been a fan of Disney/Pixar’s Cars franchise. I remember the first public reaction to the trailer for the original Cars back in 2006, many thinking that this would be Pixar’s first dud, with some even thinking it was intentional, as relations between Disney and Pixar at the time were strained at best as the two tried to negotiate a new production contract while the CEO’s of both companies were arguing in the press. Cars was to be Pixar’s last film under their deal with Disney. Cars became a marketing phenomenon for Disney, essentially overtaking Mattel’s Hot Wheels brand as the most collectible die-cast car toys, with people camping out at Toys R Us whenever a new miniature was being released. Cars, directed by John Lasseter (Toy Story), was also a box office hit that skewed across many generations of movie-goers. Five years later, with Pixar now under the Disney umbrella, Lasseter would return to the director’s chair for Cars 2. Instead of focusing on the main character of Lightning McQueen (voiced by Owen Wilson), the sequel would instead focus on his tow truck friend, Mater (voiced by comedian Larry the Cable Guy), who was a fan favorite of the first film’s much younger audience. I remember my neighbor’s reaction when arriving home from the movie theater after taking his son to a matinee of Cars 2, feeling that the film hit its target audience right on the head, but all but alienated the poor parents who took their kids to see it. “Cars 2 is going to bankrupt me this coming Christmas,” was his initial response, implying that the film was a 90-minute commercial for all the Cars toys that would be released in the next several months. The Cars franchise is such a money-maker for Disney that they added a themed Cars land to the then-struggling Disney’s California Adventure in Anaheim a year later to standing room only crowds, and remains one of the parks most popular areas to this day.

So it comes as no real surprise that, six years after Cars 2, Disney would release another sequel, Cars 3. When the teaser trailer debuted earlier this year, the reaction was that of shock, as it consisted of Lightning McQueen becoming involved in what appeared to be a near-fatal accident on the racetrack. Although the eventual theatrical trailer showed more of what the film was about, there was still some confusion over who this sequel was for.

As Cars 3 opens, Lightning McQueen is at the top of his game, winning almost every race, until he soon comes to realize that he’s no longer wining, it’s taking more out of him to get across the finish line, and many of his colleagues are starting to retire from the sport, being replaced by younger, leaner, and faster race cars. It eventually all comes crashing down on him, quite literally, when he loses control of his rear tires that results in a very violent accident, sending him back home to Radiator Springs to recuperate. McQueen’s girlfriend, Sally (voiced by Bonnie Hunt), helps pull him out of his depression and back out on the road, calling his sponsors at Rusteze, who invite him out to their new training facility. Upon arrival, he learns that the two brothers have sold the business to Sterling (voiced by Nathan Fillion) who is the real car behind the new facility and a big fan of McQueen’s. Sterling assigns his best trainer to McQueen, Cruz Ramirez (voiced by the very effervescent Cristela Alonzo), who calls McQuenn her “senior project.” The two wind up on a journey of self-discovery as McQueen tries to recapture the magic he feels he has lost and Cruz learns what her true destiny is.

Adults will likely appreciate the storyline of Cars 3 more than the younger set, as the whole idea of mentoring and transitioning in life from pupil to mentor is above most kids heads. I watched this film with two seven year-old girls in the room, and they completely lost interest about one hour into it, while the adults in the room were a bit more engaged in the story. As one would expect in a Pixar movie, the animation is first rate, with bold colors, smooth action, and life-like characters and backgrounds. The voice talent is also on par with other films in their catalog, including actual NASCAR drivers portraying many of the racing cars. Doc Hudson returns in flashbacks courtesy of outtakes of Paul Newman from the first film. Armie Hammer is excellent as the voice of condescending rookie Jackson Storm, and Chris Cooper brings the story full circle as the voice of Doc’s old pit boss, Smokey.

Cars 3 was completed as a 2K digital intermediate using Dolby Vision high dynamic range. Disney’s 2160p transfer upscales that image, and while Vudu’s UHD streaming version (sold separately) uses Dolby Vision, this UHD Blu-ray uses HDR10. As Disney’s first animated UHD release, Cars 3 takes full advantage of the higher resolution, more efficient compression codec, and wider color gamut to produce a reference quality transfer that surpasses the still excellent 1080p Blu-ray edition (included in the set). Colors are much more bold and vibrant, especially the many shades of red on McQueen’s heat-shrinked metallic wrap on his body that gets applied at Sterling’s training facility. Fine detail is also improved, particularly in the minor imperfections in car bodies (including bugs and small dents) and the viscosity of mud at the demolition derby. Cars 3 definitely sets a new standard for animated films on UHD.

Cars 3 on UHD offers many audio choices to choose from: Dolby Atmos 7.1.4 (with Dolby TrueHD 7.1 core), Dolby Digital Plus 7.1 (at 1.0 Mbps), Dolby Digital 5.1 (at 640 Kbps), and Dolby Digital 2.0 (at 320 Kbps). Unfortunately, the disc defaults to Dolby Digital 5.1, so in most cases users will definitely want to visit the audio setup menu and select the Dolby Atmos track, even if they are equipped for only 5.1, as this track has a wider dynamic range and higher fidelity than any of the lossy tracks on the disc. However, when compared to the DTS-HD Master Audio 7.1 on the included Blu-ray (the Blu-ray also contains a DTS-HD High Resolution 5.1 track), the differences are more subtle. Bass response has a much stronger presence on the Atmos track, and the soundfield is a bit wider with minimal uses of the height channels. Dialogue remains strong throughout without getting lost in the mix. This is a good track, but not one I would use to show off the additional benefits of Atmos.

All of the special features can be found on the two Blu-ray discs included in this set (one that includes the feature film and a handful of bonus materials and a separate disc of special features). My real pet peeve here is that the short subjects Lou and Miss Fritter’s Racing Skool have not been included on the UHD Blu-ray.

Feature Film Blu-ray:
Lou (1080p; 6:43): Likely to be nominated for an Oscar for Best Animated Short Subject, this is a fun and heartwarming story about a schoolyard bully getting his comeuppance by some lost and found items during recess.

Ready for the Race (1080p; 5:40): A tour of the Hendrick Motorsports Training Facility and how NASCAR racer William Byron prepares himself for racing day.

Cruz Ramirez: The Yellow Car That Could (1080p; 7:46): A look at the design and vocal performance for Cruz Ramirez.

Audio Commentary with Director Brian Fee, Producer Kevin Reher, Co-Producer Andrea Warren, and Creative Director Jay Ward: This is a very lively conversation with lots on information on the making of the film and the research that went in to it.

Special Features Blu-ray:
Behind the Scenes:
Generations: The Story of Cars 3 (1080p; 11:20): A very informative piece on developing a sequel to a successful franchise.

Cars to Die(cast) For (1080p; 5:21): A look at the many different collectible die-cast cars inspired by the films.

My First Car:
A Green Car on the Red Carpet (1080p; 1:53): Kerry Washington, who voices the character of Natalie Certain, discusses getting her first car after growing up in New York City.

Promos:
Cars D’Oeuvres (1080p; 4:27): I’m guessing these are interstitials created for either the Disney Channel or ABC, featuring characters from Cars 3.

Digital HD Copy: An insert contains a code to redeem an HD Digital Copy on Movies Anywhere and a code for Disney Movie Rewards. Unlike Guardians of the Galaxy, Vol. 2 and Pirates of the Caribbean: Dead Men Tewll No Tales, Disney is only providing digital copies in HD for this UHD release of Cars 3. This may be subject to change in the future.

Although not a fan of the franchise, Cars 3 kind of grew on me after my second viewing. Video on this release sets a new benchmark for animated titles on UHD, while the Atmos sound mix was a subtle improvement over the 7.1 DTS-HD-MA track on the Blu-ray. Extras are of high standards, as expected on a Pixar release, but disappointing that the short subjects could not be included in UHD. 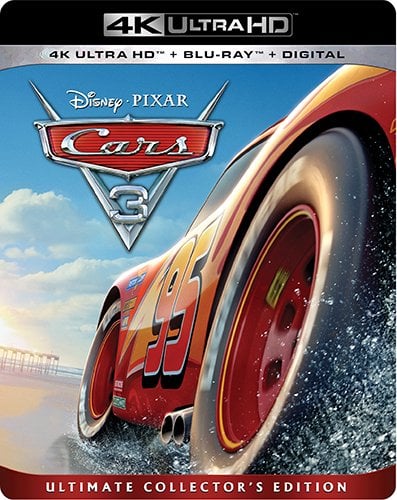