Boy Erased, written and directed by Joel Edgerton, wants to be a hard-hitting drama on conversion therapy, but ultimately feels like a made-for-TV melodrama.

Jared Eamons (Lucas Hedges) is the son of an up and coming Baptist pastor (Russell Crowe) in a small town. He’s a confused young man, feeling uncomfortable with his cheerleader girlfriend in high school, and when he arrives in college befriends a young man living a few rooms down the hall in the dorm. The two hang out, often running at night and play video games, until one night that “friend” rapes him in his bed, then outs Jared to his father. Meeting with church elders, his father decides to enroll Jared in Love In Action, a conversion therapy center run by Victor Sykes (Joel Edgerton, who also wrote and directed). Jared is accompanied by his mother (Nicole Kidman), who drives him back and forth from their hotel to Love In Action, also acting as his chaperone when he is off-campus. Sykes uses role-playing and often bullying to try and convert these kids, with help from other counselors, including a caricatured bigoted bully played by Flea of the Red Hot Chili Peppers. We see them get yelled at, forced to draw a genealogy map of their family and their sins, and admit their own sins. The kids are forced to leave their cell phones at the front desk each morning unlocked so they can be monitored for any unauthorized calls, leave any notebooks when they leave for the day, not speak about their therapy outside of the group, and must be chaperoned to the restroom by a staff member at all times.

Boy Erased wants to be a hard-hitting drama about these conversion centers that have eventually been outlawed in several states, but the script (based on the memoir of the same name by Garrard Conley) and direction by Joel Edgerton never attempts to go for the jugular – having the guts to possibly show any of the possibly real horrors on these conversion centers. Also, we never see the key turning point in Jared’s life, where he realizes that he is gay and no conversion therapy is ever going to change him. All four lead roles put in the best performances they can from a rather bland screenplay, but ultimately, since the film too often shies away from its difficult subject matter, Boy Erased feels like a made-for-TV melodrama.

Boy Erased was photographed by Eduard Grau (Trespass Against Us) digitally on Arri Alexa Mini cameras and on 35mm film using Arricam LT cameras, then completed as a 4K digital intermediate. Universal has elected to release this film on Blu-ray as its highest physical media resolution (although it is available on Vudu in UHD with HDR10). I found the film to have a rather muted color palette and bland cinematography style, which has been translated rather well in this 1080p AVC-encoded transfer, retaining the film’s theatrical aspect ratio of 1.85:1.  Detail is often very good, revealing facial features and fabric textures. Contrast is, at times, rather murky, especially during darker-lit sequences. At first, I thought that a recent firmware update on my display had changed some of my settings, but no, that is how the movie was rendered.

Universal has provided Boy Erased with a decent and unsurprising DTS-HD Master Audio 5.1 track that is rather front-heavy, as one would expect in a drama, with surrounds used for ambience and the occasional discrete sound effect (like a door closing or a voice speaking from the back of a room). LFE doesn’t have much to work with, but does help to provide a low-end to the score by Danny Bensi and Saunder Jurriaans. Dialogue is clear and understandable throughout.

Jared Revealed (1080p; 3:10): A very brief look at the character of Jared and the performance of Lucas Hedges.

Becoming the Eamons (1080p; 5:41): A similar brief look at the roles played by Nicole Kidman and Russell Crowe.

Man Consumed: Joel Edgerton (1080p; 4:32): A look at the writer-director of the film by the cast, crew, and Edgerton himself.

Boy Erased all too often shies away from its material, playing it safe while trying to drive home a message about conversion therapy, which ends up working against the film as a whole. 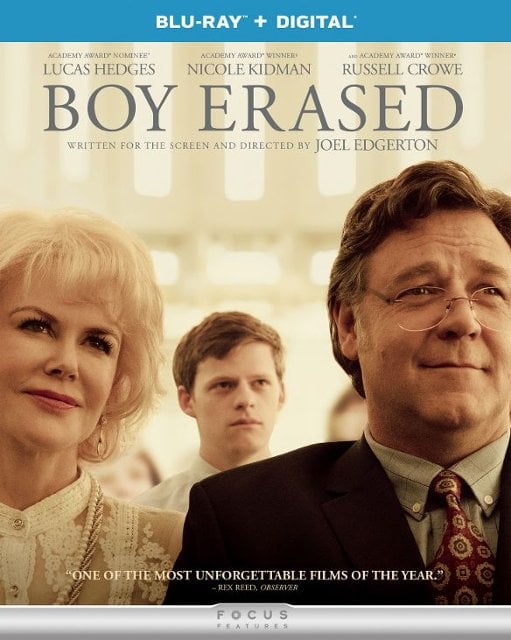