Forum List What's new Dark Style Change width
Log in Register
What's new Search
Menu
Log in
Register
Navigation
Install the app
More options
Dark Style
Close Menu
Posted on January 28, 2019 by Josh Steinberg
You are using an out of date browser. It may not display this or other websites correctly.
You should upgrade or use an alternative browser.
Nicholas Ray’s 1957 CinemaScope western comes to Blu-ray. 4 Stars

The True Story Of Jesse James is director Nicholas Ray’s crack at telling a western legend, and the film often shows his touch. While not the most memorable film of his career, it’s entertaining enough for what it is, and the new Twilight Time disc boasts a first rate presentation that accentuate the film’s better qualities.

Though the film is titled The True Story Of Jesse James, a more accurate title might have been A Truer Story of Jesse James Than The 1939 Version Was. Adapted by screenwriter Walter Newman from Nunnally Johnson’s earlier script, and directed by Nicholas Ray, this 1957 production showcases some good performances, nice photography and a very lively and enjoyable sound mix. While it’s not one of the all time greats, it is a pretty nice way to spend 92 minutes on a lazy day.

As the film begins, Jesse James (Robert Wagner, good enough) and his brother Frank (Jeffrey Hunter, pretty great actually) are on their way to rob a bank with their gang. As the James brothers ride to their destination, the film weaves in and out of a series of flashbacks showing how they turned to lives of crime and their greatest triumphs. In the present, the robbery faces complications, setting Jesse on what will be his final path. While Jesse is out having his adventures, the home life of Jesse’s wife (Hope Lange) and mother (Agnes Moorehead) is shown, with its own series of flashbacks between past and present day. While the film’s flashback structure is never confusing, it ultimately undersells the dramatic weight of these moments; the film at times can feel like a “previously on” recap of a weekly serial rather than its own story.

But if the script is on the lighter side, and if the structure does more to diminish the drama than enhance the suspense, the film’s technical credits are first rate. Ray’s use of the camera and framing choices are spot-on; he makes good use of the CinemaScope frame not only in the action sequences but also in the film’s quieter moments, emphasizing relationships in how characters are framed together. Leigh Harline’s score also contributes greatly to the film, filling in the emotional gaps between the screenplay’s broader strokes.

The True Story of Jesse James is presented in its original aspect ratio of 2.35:1. Footage taken from the original camera negative looks pretty fantastic, crisp and clean, with great detail, color and contrast. It’s also rock steady and doesn’t show the slightest hint of damage or debris, and has very pleasing natural grain, yielding a beautifully film-like image. That’s the good part. The less good part is that the film has a lot of opticals, both from the frequent flashback transitions, which are by no means terrible, but do stand out in their frequency. More noticeable is the use of stock footage taken from the 1939 production, which had been optically blown up and cropped from 1.37:1 to 2.35:1, resulting in shots which quite obviously do not match the rest of the film. But none of these things are defects in Twentieth Century Fox’s master or Twilight Time’s disc, but rather, an accurate presentation of how the film has always looked.

Two audio options are available, both in the lossless DTS-HD MA format: a 5.1 surround track, and a 2.0 stereo track. The 5.1 surround track is easily the winner here, and what a track it is. Simply put, it sounds huge, with a very wide soundstage and great dynamic range. Directional dialogue is maintained, though occasionally subtle in its use. This is one of the liveliest, most enjoyable tracks from this era that I’ve ever heard. The 2.0 track is not nearly as lively by comparison. Both tracks are free of hiss or any other age-related artifacts.

Fox Movietone Newsreels (10:48, SD) – Strung together without any context, these clips show behind the scenes and premiere footage from the 1939 Jesse James film, and are mostly silent, and in black & white.

The True Story of Jesse James is a reasonably entertaining, if not terribly accurate, telling of Jesse’s story. What the film lacks in writing, it makes up for in production values. Twilight Time’s disc looks great and boasts a truly impressive soundtrack that is a must-hear for fans of directional dialogue and vintage multichannel audio.

Thanks for the review, another movie title I hope to watch over this cold spell in mid-Michigan.

If any of you have seen The Long Riders, they copied the beginning scene where they are trying to get out of town after robbing a bank from The True Story of Jesse James.
You must log in or register to reply here. 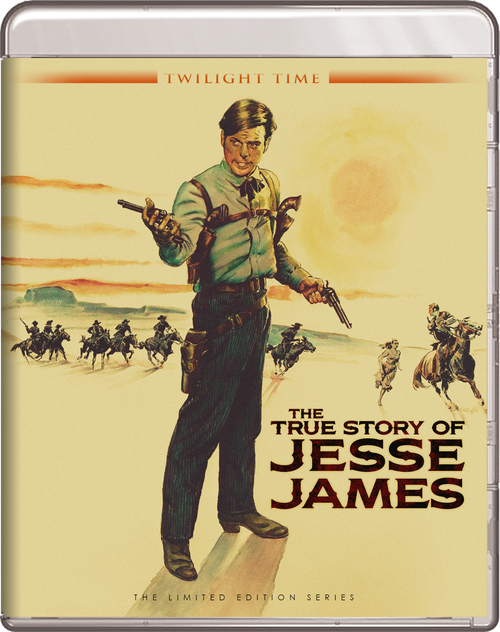