Forum List What's new Dark Style Change width
Log in Register
What's new Search
Menu
Log in
Register
Navigation
Install the app
More options
Dark Style
Close Menu
Posted on January 13, 2019 by Josh Steinberg
You are using an out of date browser. It may not display this or other websites correctly.
You should upgrade or use an alternative browser.
Fantastically entertaining CinemaScope color film noir. 4 Stars

Van Heflin leads a wonderful ensemble cast in 1954’s Black Widow, where he plays a Broadway producer who becomes ensnared in a murder case when an aspiring 20-year-old writer is found dead in his apartment. Filled with mystery, style, and red herrings, Black Widow makes for a fun night at the movies.

Writer-producer-director Nunnally Johnson’s primary career was as a Hollywood writer, where he made a living for decades churning out high quality scripts, comfortable in almost any genre. In the mid-1950s, he was finally given the chance to direct, and 1954’s Black Widow represents one of his earliest turns behind the camera. Given his sense of story and dialogue, not to mention the numerous talents he had crossed paths with in years prior, it’s no surprise that Johnson’s handling of Patrick Quentin’s 1952 novel works so well onscreen.

Though there’s debate as to whether a color widescreen film can truly be considered a film noir, Black Widow makes a pretty compelling case that if the rest of the elements are right, it can be. The story centers around Peter Denver (Van Heflin), a celebrated Broadway producer who lives in the same apartment building with the star Lottie Marin (Ginger Rogers) and her husband Brian (Reginald Gardiner). Peter’s wife Iris (Gene Tierney) is away on vacation, which leaves Peter free to attend a party at Lottie’s, where he meets an aspiring young writer called Nanny (Peggy Ann Garner). Nanny is a cousin of another party guest, and needs a quiet place to write during the day, so Peter offers the use of his otherwise vacant apartment (with his wife’s permission, of course). One day, upon returning home with his wife, Nanny is found dead in the Denver home. A police detective (George Raft) is quick to want to pin the blame on Peter, and Peter realizes that it’s up to him to solve the case for the police if he wants to keep his freedom.

While the film was not a critical darling on its original release (it did better with audiences), it has aged well, with elements of its whodunit plot seemingly ahead of their time. The performances are all solid, with Heflin well-cast as the audience surrogate. Rogers excels in a role that allows her to show more range than the Astaire-Rogers films she is perhaps best remembered for today. Garner has the right blend of sweetness and mystery, enough to take her character at face value when she’s first introduced without being surprised when it turns out that there’s more to her than meets the eye. Tierney is sympathetic in her role as Heflin’s wife, and Raft is reliable as the detective who keeps Heflin on the run. Director Johnson does a great job of balancing the different characters and actors, not tipping his hand about who the killer could be until the last possible moment.

Black Widow is presented in its original aspect ratio of 2.55:1. The new transfer, provided by Twentieth Century Fox, looks stunning, with fantastic color, contrast and detail. This is as close to perfect as a 1954 CinemaScope movie can look. With absolutely no signs of dirt, damage or debris, the film looks brand new.

The disc offers three options, all presented in the lossless DTS-HD MA format: a 5.1, a 4.0 and a 2.0 mix. The 5.1 is the preferred option, as it represents the best of all worlds: the original sound design with directional dialogue retained, best formatted for home viewing. Though most of the sound is front oriented, there is occasional use of the surrounds, primarily with music. The 4.0 track is very similar, also containing directional dialogue, but seems slightly less weighty than the 5.1 by comparison. The 2.0 version still has good fidelity, but lacks the full directionality and separation of the other two tracks. All are free of age-related artifacts like hiss, and dialogue is well recorded and mixed in each.

Audio Commentary with Film Historian Alan K. Rode – Carried over from the film’s original DVD release, Rode’s commentary is more scholarly than conversational, and includes some great insights into both the production itself and the talent involved.

Ginger Rogers at Twentieth Century Fox (8:32, SD) – Also carried over from the DVD, this short feature examines a solo period in Rogers’ career.

Gene Tierney: Final Curtain For A Noir Icon (6:19, SD) – Another holdover from the DVD, this short piece looks at Tierney’s final projects.

Original Theatrical Trailer (2:32, HD) – The trailer has been cropped to 16×9 and shows a bit of age and wear, but does a great job of naming all the players and casting suspicion over each of them.

Booklet – Included along with Julie Kirgo’s insightful essay is a collection of original production stills and poster art.

Black Widow is an entertaining film worthy of being revisited on disc. Nunnally Johnson’s film is well-structured and perfectly paced, with an outstanding cast that performs well in their roles. Twilight Time’s new disc offers a stunning new transfer of the film looking better than ever. The bonus features from the previous DVD release have been retained, and included along with a new isolated score.

A note about the packaging from Twilight Time: This title was delivered to us from our supplier with a blue colored case, not the clear case as pictured.  When you purchase this title we will automatically add a free clear case to your order that you can use if you wish.

Thanks for the nice review, these early Cinemascope titles have a lot of appeal for me. Looks like I need to pick this one up, especially that the PQ is wonderful.

This movie is so bad. Why on earth would Twilight Time even bother?

filmnoirguy said:
This movie is so bad. Why on earth would Twilight Time even bother?
Click to expand...

Because there are other people like myself that liked this movie.

I can't speak to why Twilight Time picks any specific movies, but their braintrust does seem to have some specific tastes. They released a lot of 1950s CinemaScope titles from Twentieth Century Fox in 2018, and I think this was part of that pattern -- both of the October Fox releases from TT were early 50s CinemaScope films.

Josh Steinberg said:
I can't speak to why Twilight Time picks any specific movies, but their braintrust does seem to have some specific tastes. They released a lot of 1950s CinemaScope titles from Twentieth Century Fox in 2018, and I think this was part of that pattern -- both of the October Fox releases from TT were early 50s CinemaScope films.
Click to expand...

On a side note, there doesn’t seem to be any connection between this film and the 1987 Black Widow even though TT has released both.

You don’t think Skatetown has Mill Creek written all over it?

Early CinemaScope has a lot of appeal. The stereo mixes were full-bodied, and the 255 AR spoke of real wide screen.

CinemaScope is still the most influential process IMHO. You can still see it on display (in effect) in today's big productions.

Josh Steinberg said:
You don’t think Skatetown has Mill Creek written all over it?
Click to expand...

Honestly I don’t care who would end up releasing it as long as we get a quality Blu-ray or UHD Blu-ray.

I bring up TT because they do have an agreement with Sony/Columbia.

Enough on that subtopic. I don’t want to derail this thread.

filmnoirguy said:
This movie is so bad. Why on earth would Twilight Time even bother?
Click to expand...

Yes it is quite bad considering the talents involved. 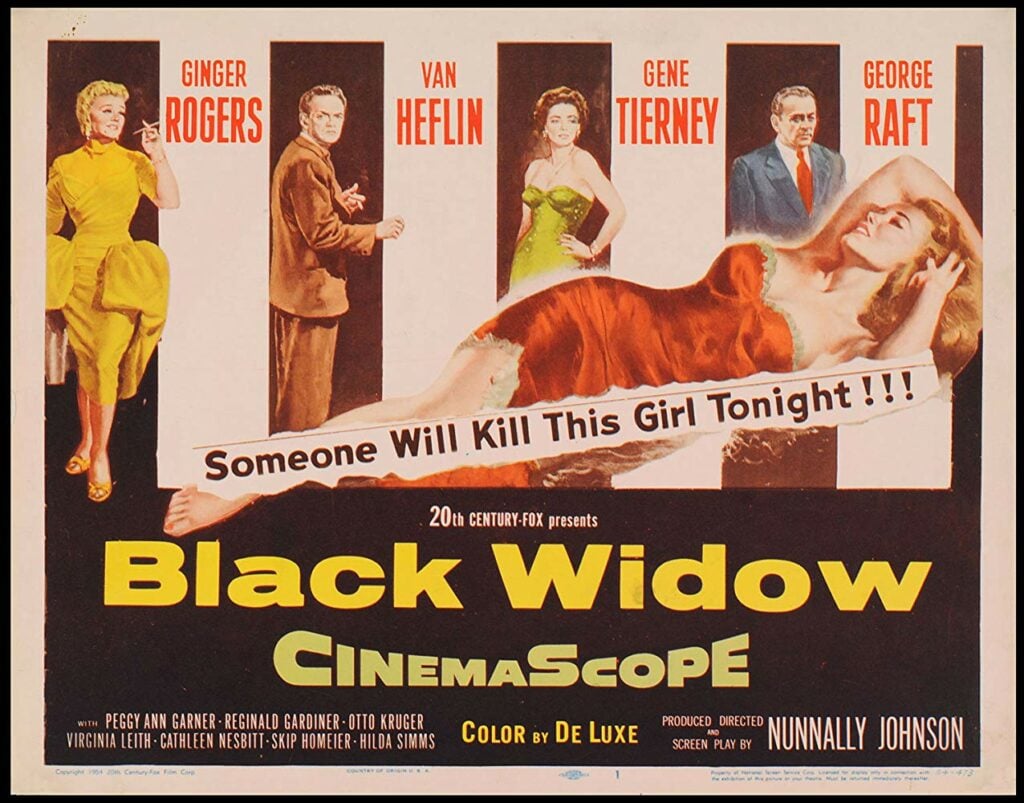 Finally got around to watching this, and enjoyed it a lot, as did my better half.

It was one of the more enjoyable TT titles I got to write up - as soon as I can forget all the twists and turns I’ll go back for more.

Josh Steinberg said:
It was one of the more enjoyable TT titles I got to write up - as soon as I can forget all the twists and turns I’ll go back for more.
Click to expand...

I’d not seen this film before, and it’s been some time since I read your write-up and felt compelled to buy it.

By the time I watched it today, I didn’t remember the finer details of your review, and only revisited it after watching the Blu today.

I think your observations were excellent. I was very impressed with the structure of the piece - quite effective misdirection in terms of chronology of events which came together late in the piece. Performances were fine and the visuals outstanding.

Yet another of the unfortunate side-effects of TTs hiatus/demise is not being able to read more of your thoughtful and articulate write-ups.

Based on a series of mystery novels that featured Peter and Iris Duluth, an alcoholic theatrical producer and his actress wife. Author Patrick Quentin was an aka of Richard Webb and Hugh Wheeler. Several titles were made into movies, but only 'Homicide for Three' (1948) used the couple's true names. He's Peter Denver in 'Black Widow', and Peter Chance in 'Female Fiends' (aka 'Strange Awakenening') (1958). In 'The Man in the Net' (1959) he becomes John Hamilton, a commercial artist.

Enjoyed this movie today, which as mentioned in the review has fine picture quality. It's a tense roller coaster murder mystery, and almost like a color Film Noir with dashes of All About Eve.
You must log in or register to reply here. 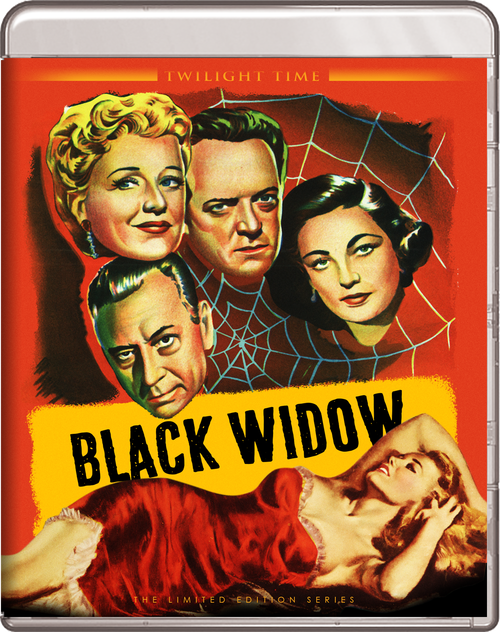