Forum List What's new Dark Style Change width
Log in Register
What's new Search
Menu
Log in
Register
Navigation
Install the app
More options
Dark Style
Close Menu
Posted on February 7, 2021 by t1g3r5fan
You are using an out of date browser. It may not display this or other websites correctly.
You should upgrade or use an alternative browser.
Brutal WWII drama debuts on Blu 3.5 Stars

After a run as a matinee idol – primarily for 20th Century Fox – during the 1940’s, actor Cornel Wilde turned to the director’s chair during the 1950’s, starting with the film noir Storm Fear (1956). Following on the heels of his best known directorial effort The Naked Prey (1966), Beach Red was Wilde’s look at WWII conflict through clear eyes. Previously released on DVD by MGM, Kino has picked up the movie for its Blu-ray debut.

On an unnamed Pacific island during World War II, a group of Marines led by Captain MacDonald (Cornel Wilde) and Sergeant Honeywell (Rip Torn) are tasked with capturing the island from the Japanese forces. After securing the beach, Honeywell leads a squad deep within the jungle to locate the enemy base; however, they soon learn that the enemy is planning a counterattack to push the Marines off the island with swift and brutal force. Over the next several hours, blood will be shed over the sands, but only one force will emerge victorious…

With Beach Red, Cornel Wilde took the similar approach he made with The Naked Prey as a producer and director, by showing wartime conflict as both brutal and unglamorous. Right from the start, the movie’s opening act details the invasion of the island’s beach with visceral and gripping detail; one could guess that Steven Spielberg might have been inspired by this scene when he filmed the D-Day Invasion for Saving Private Ryan (1998) years later. Following this, Wilde (who also contributed to the script under the pseudonym Jefferson Pascal) also delves into the minds of the men fighting the conflict through a combined use of voiceovers and flashback sequences detailing some of their past lives (at one point, one scene where an injured American solider is lying close to an injured Japanese one is a pale echo of a similar scene in All Quiet on the Western Front (1930); in addition, due to the fact that the US Marine Corps were unable to assist in the project because of commitments to the Vietnam War, Wilde utilized stock footage from WWII (which had to be restored due to deterioration, which the Marines were grateful for). However, perhaps the most impressive aspect of this movie is the fact that Wilde chose to portray the Japanese soldiers in a comprehensive – if not entirely sympathetic – light that was not often seen in WWII movies up to that point; the other most notable instance of this was Frank Sinatra’s underrated None But the Brave (1965). Using a number of tools at his disposal, Beach Red showed that Cornel Wilde was a brilliantly underrated actor/director who could take a simple straightforward plot an turn it into something extraordinary; the fact that the movie came at the height of the Vietnam War seems to (in retrospect) further underscore the message of war being absolutely nothing like the movies usually tend to show.

While Wilde is very good here in all departments (including acting), it would be remiss to not mention the contributions of his costars. Rip Torn is brilliant as the gung ho Sgt. Honeywell here; he is better known to audiences for his later appearances in the Men in Black franchise and Dodgeball: A True Underdog Story (2004) as well as earning a Best Supporting Actor Oscar nomination for his performance in Cross Creek (1983). Wilde’s wife Jean Wallace also appears in flashback scenes as the wife of Capt. MacDonald; she also sings the film’s title song during the credits. Jaime Sánchez (better known for his appearance in Sam Peckinpah’s western masterpiece The Wild Bunch) makes the most of his time as the soldier Colombo while Patrick Wolfe has a very notable scene as Cliff when he’s stranded with an injured Japanese soldier; cult film fans should recognize Burr DeBenning (from The Incredible Melting Man) as the Marine soldier Egan while Dale Ishimoto is a solid leader of the Japanese troop pegged with keeping the island under their control.

The film is presented in its original 1:85:1 aspect ratio for this release. Film grain is organic throughout, with fine details and color palette mostly given a faithful representation; there are noticeable shifts in quality present due to the condition of the stock footage used in some parts of the movie. There’s minor instances of scratches, dirt, tears and dust present here, but overall this is likely the best the movie will ever look on home video, besting the previous MGM DVD.

The film’s original mono soundtrack is presented on a DTS-HD Master Audio track for this release. Dialogue, sound mix and sparse musical score are all strong and clear without being intrusive on each other; there’s minimal to no instances of issues like distortion, crackling, popping or hissing present here. Overall, this is likely the best the movie will ever sound on home video and represents another improvement over the MGM DVD.

Despite earning an Oscar nomination for Best Film Editing, Beach Red largely came and went without much fanfare during its initial release; despite that, the film is brilliantly underrated gem of the 1960’s that’s worthy of reappraisal. Kino’s Blu-ray release should help in that appraisal with a strong HD transfer of the movie (despite being largely bare bones in the special features department); overall, it’s worth upgrading from the MGM DVD and highly recommended.

Thanks for the review, Mychal! I forgot Kino was releasing this; there's been so many gems coming out of late.

I saw this film when it was released in the late 60's and remember being fairly blown away by it, especially Rip Torn's performance, also the grittiness of the photography and the starkness of it all, as well as the focus on the characters, lives and feelings of the soldiers.

Thank you for the review. I definitely need to pick this one up.
You must log in or register to reply here. 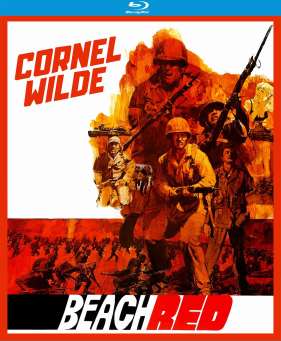