World War II has been a running theme throughout many of Steven Spielberg’s films. Quint’s speech on his experience aboard the USS Indianapolis in Jaws. The discovery of a squadron of fighter planes in the Mexico desert thought to have been lost in the Bermuda Triangle in 1945 in Close Encounters of the Third Kind. The mass hysteria of a post-Pearl Harbor Los Angeles in 1941. Indiana Jones fighting Nazis in Raiders of the Lost Ark and Indiana Jones and the Last Crusade. A crew go on their last bombing run with a jinxed belly gunner in the Amazing Stories episode The Mission. A young boy’s experiences in a Japanese POW camp in Empire of the Sun. Oskar Schindler savings Jews from the Nazi Concentration Camps in Schindler’s List. It should be no surprise, then, that Saving Private Ryan would be and remains one of the master storyteller’s best films, and one on the best war films ever made.

The film opens with what is, perhaps, the most realistic depiction of D-Day, the Allied invasion of Normandy, which would become the turning point in World War II. This is a brutal sequence, running the first 25 minutes of the film, and is not easy to watch due to the excessive and very real violence and gore, but definitely drives the point home – war is hell. During the battle, two brothers are killed, with a third dying in another battle that same day, and the fourth reportedly dropped behind enemy lines somewhere in France. General George Marshall (Harve Presnell) orders that the surviving brother, Private James Francis Ryan (Matt Damon), be found and returned home to his family at once.

Spielberg’s film is gritty and places the viewer entrenched with Miller’s squad, never taking a glorified look at war. The battle sequences are filmed newsreel style, often resulting in shaky camera moves and using various shutter speeds to create a blurring or streaking effect often seen in documentary footage. This effect was so jarring for modern audiences that many thought, when the film was first released on DVD, that the discs were defective. The film very deservedly took home Oscars for Best Director (Spielberg), Cinematography (Janusz Kaminski), Sound, Editing, and Sound Effects and Editing. Many have agreed, looking back 20 years later, that Saving Private Ryan was much more deserving of Best Picture than the winner that year, Shakespeare in Love.

The film is filled to the gills with fine performances, especially Hanks who plays a commander suffering from PTSD and keeping his personal life to himself. Every member of Miller’s squad are three-dimensional and played to perfection. Look for cameos by Ted Danson, Paul Giamatti, Dennis Farina, Nathan Fillion, Bryan Cranston, and Max Martini.

Photographed by Janusz Kaminski on 35mm film stock, Paramount commissioned a new 4K scan of the film for its 20th anniversary along with high dynamic range in both Dolby Vision and HDR10. That is all included in the 2160p transfer on this UHD disc, and the results are breathtakingly reference level quality throughout. You are probably wondering, if this shot with intentionally muted colors, will high dynamic range destroy what the filmmakers intended? Absolutely not. If anything, the colors are more stable than on previous Blu-ray and DVD releases, and only pop when intended (such as pools of blood). Contrast is greatly improved, with deeper blacks and brighter whites, allowing the shapes of clouds to be more clearly defined in the mostly grey sky. Detail, though, is where the disc exceeds previous releases, noticeable in facial features such as beard stubble, grime, blood and in some cases, facial pores. Fabric textures, blades of grass, the metallic textures of the helmets, all benefit from increased detail. Film grain is evident but never distracting. Film to 4K digital transfers just don’t get much better than this.

Saving Private Ryan has always sounded great on just about every disc format the film was released on. Neil Middlemiss gave the original Blu-ray release (included in this set) a 5 out of 5. The Dolby Atmos track included on the UHD Blu-ray bests that in spades by expanding the listening area above and further behind you (for those using a 7.1.4 Atmos setup). Discrete sounds are now more precise in their placement with heights engaged mostly for atmospherics but do kick in during the opening invasion sequence and the finale to the battle in Ramelle with planes flying overhead. LFE is tighter and more pronounced than on previous releases, while dialogue is always clear and understandable when intended. For purists, Paramount has included a lossy Dolby Digital 5.1 track, encoded at the maximum 640 kbps.

The UHD Blu-ray is movie only, but Paramount has included the 2-disc Blu-ray edition from 2001, which contains all of the special features on a separate disc.

Digital Copy: An insert contains a code to redeem digital copies on UltraViolet and iTunes. 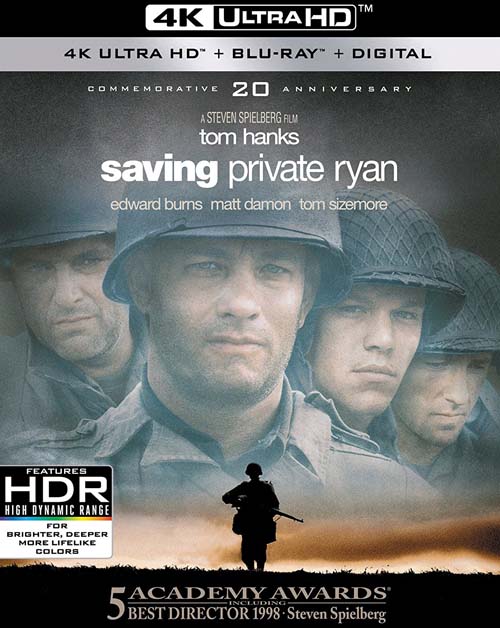