After spending much of the 1940s and 1950s as a matinee idol, Cornel Wilde focused much of his attention behind the camera starting with Storm Fear in 1956. From there, he balanced duties as writer, actor, producer, and director, making appearances in both film and television as well. From his time juggling these many roles came The Naked Prey, a harrowing and thrilling tale of survival loosely based off of a real life incident from the 19th Century. Criterion has revisited their early DVD release of this movie with a Blu upgrade.

In colonial South Africa, a group of hunters on a safari come across a Nguni tribe and the leader rebuffs the natives when they expect to be bought off with gifts, despite the advice from the head guide (Cornel Wilde). That decision comes back to hurt the group when the tribe captures them and kills them, except for the guide; as a sport, they strip him of nearly everything and hunt him across the vast veldt. It’ll take everything the guide has to survive against all odds in the unforgiving landscape.

Loosely based upon the real life experience of trapper John Colter and the Blackfoot Indians in the early 19th Century, Cornel Wilde transposed the action to colonial-era Africa (likely due to budget reasons) and, in the process, brought a sense of realism that largely unseen in the survival movie genre. Clint Johnston and Don Peters’ script probably has the fewest spoken lines of any movie since Charlie Chaplin’s Modern Times but the movie doesn’t necessarily need them; you can basically figure out the intentions and thoughts of the characters through their actions more than any other movie in the genre – an impressive feat that earned the movie an Oscar nomination for the script. More impressively, Wilde did nearly all of his own stunts during the movie, again showing off both his athletic ability (he was a former Olympic hopeful before entering the entertainment business) and the realism that the movie requires in order to be convincing; it’s all the more impressive when you learn that Wilde was 52 year old during filming and sick for much of the production, again lending a degree of realism that, up until this point, Hollywood movies tended to avoid when making movies about Africa. But Wilde the actor is matched by Wilde the director as well; he’s maintains a steady yet feverish pace that rarely lags, even in quieter moments when he’s not being chased or when footage of wildlife in the veldt is transposed to symbolize the harsh cutthroat nature. This is movie that takes many risks in showing the brutal nature of man along with making it an exciting yarn free of pretension, but not only does it meet them, it surpasses it with all the speed that a leopard has in chasing its prey.

The original 2:35:1 aspect ratio is faithfully preserved in this new HD transfer of the movie that surpasses the original Criterion DVD release transfer in terms of quality. Grain is film like and fine, with some heavier instances in the case of the stock footage used for the wildlife sequences. Colors are vivid, with fine details and shadows strong with minimal instances of scratches, dirt, dust, speckling, and tearing; another quality effort from Criterion.

The original mono soundtrack is faithfully presented in the monaural DTS-HD Master Audio track. The few line of dialogue spoken here are strong and clear with the instances of sound effects and music performed having both clarity and strong fidelity that’s not overpowering. Again, another great job done by Criterion as the film probably never sounded better on home video.

The original special features that accompanied the initial 2008 DVD release of the movie have been ported over here.

Commentary by film scholar Stephen Prince – The track contains plenty of information in regards to the film production as well as some analysis into the greater themes of the movie. I can’t pick out one particular tidbit that stood out above the rest, but I will share that the track was, insightful, enlightening and interesting throughout.

John Colter’s Escape (4:57) – The account that formed the basis for the movie is presented with visual accompaniment and narrated by actor Paul Giamatti.

Original Soundtrack Cues (28:35) – The complete soundtrack, all 18 cues, are presented with some visual accompaniment along with a brief written statement by the film’s musical director Andrew Tracey, which is presented separately.

While the movie came and went without too much fanfare during its initial release, Cornel Wilde’s The Naked Prey has gone on to achieve the status of a minor classic. Criterion’s first DVD release of the movie helped bring about a wider exposure of the film, but they’ve bested it with a better audio and visual presentation on this Blu-ray upgrade. I wholeheartedly recommend this upgrade of the movie, as it probably represents the best the movie has looked on home video. 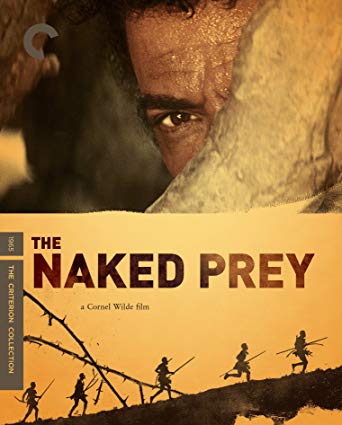