Forum List What's new Dark Style Change width
Log in Register
What's new Search
Menu
Log in
Register
Navigation
Install the app
More options
Dark Style
Close Menu
Posted on February 8, 2021 by Todd Erwin
You are using an out of date browser. It may not display this or other websites correctly.
You should upgrade or use an alternative browser.
Costner’s best in years 4 Stars

Kevin Costner returns to the western genre in Let Him Go, which also reteams him with his Man of Steel co-star Diane Lane, as a couple attempting to rescue their grandson.

Retired sheriff George Blackledge (Kevin Costner) and his wife Margaret (Diane Lane) live on a farm raising horses with their grown son James (Ryan Bruce), their daughter in-law Lorna (Kayli Carter), and grandson Jimmy. When James is killed after being thrown off his horse, Lorna remarries Donnie Weboy (Will Britain), opting to take an apartment in town. During a trip to town for supplies, Margaret witnesses Donnie physically abusing both Jimmy and Lorna. The three then suddenly disappear without a trace. Fearing the worst, Margaret convinces George to track down Lorna and Jimmy, their only remaining heir. George’s investigation leads them across state lines to Bill Weboy (Jeffrey Donovan), who negotiates a dinner meeting with the matriarch of the Weboy clan, Blanche (Lesley Manville). What George and Margaret discover is an abusive and very dysfunctional family, one that is not willing to let Jimmy or Lorna go too easily.

Based on the novel by Larry Watson, Let Him Go is set in the 1960s rural midwestern United States, and has the feel of a 1990s Clint Eastwood western (Costner starred in Eastwood’s 1960s-set A Perfect World in 1993), taking its time in telling its story, a slow burn (no pun intended) until the remaining 30 minutes. Writer-Director Thomas Bezucha (better known for comedies like Monte Carlo and The Family Stone) shows his passion for the source material in the character development and underlying violence that slowly makes it way to the surface. Guy Godfree’s cinematography and Trevor Smith’s production design bring the beauty of 1960s rural mid-America to the screen. Kevin Costner, who has been seen more recently on the smaller screen in the western TV series Yellowstone and the Netflix movie The Highwayman, reminds us of his past movie stardom in his command as the rugged George Blackledge, while Diane Lane makes this movie her own as the grieving Margaret, determined to get her grandson back in her arms, no matter what the cost. Lesley Manville is absolutely manic as Blanche Weboy, a woman with a nasty and abusive mean streak, a viper most people would not want to mess with. It’s an over-the-top performance, but in a good way. Jeffrey Donovan gets under the skin, as well, as the lecherous Bill Weboy, mostly in his mannerisms rather than actions.

Universal brings Let Him Go in a very good 1080p AVC-encoded transfer on Blu-ray. Detail is excellent, from the rugged age lines of its two stars to fabric textures. Colors are lush during the opening prologue, but then become slightly more muted as the grieving process begins. Contrast is problematic at times, with black levels approaching dark grey at best and shadow details occasionally suffering from black crush, although it is more noticeable if you are looking for it specifically.

Universal has provided a DTS-HD MA 7.1 track that is subtle in its approach rather than overwhelm the viewer with an overabundance of sounds. This is a relatively quiet film until the last 30 minutes, with Michael Giacchino’s score and atmospheric effects like bird’s singing filling out the 7.1 layout. LFE is strong when needed, such as gun shots or roaring fires. Dialogue is clear and understandable throughout.

The Making of “Let Him Go” (1080p; 6:23): Very by-the-numbers EPK look behind the scenes, featuring interviews with the cast and crew.

Lighting the Way: Thomas Bezucha (1080p; 3:15): Th writer-director discusses what drew him to wanting to make the movie.

DVD Copy: The movie in standard definition and Dolby Digital 5.1, plus the above listed special features.

Digital Copy: An insert contains a code to redeem a digital copy on Movies Anywhere, plus a rewards code on the reverse to redeem at Universal All-Access Rewards.

Let Him Go features one of Kevin Costner’s best roles in years, plus great performances all around. It’s a slow-burn of a movie, and does require some patience for it to pay off for its audience.

Thanks for the review Todd. I’ll likely blind-buy this. A shame that more and more videos released today are giving us very little in supplements.
You must log in or register to reply here. 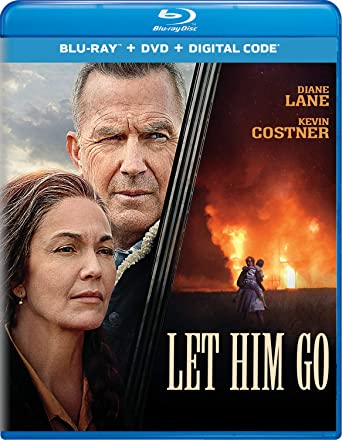