Forum List What's new Dark Style Change width
Log in Register
What's new Search
Menu
Log in
Register
Navigation
Install the app
More options
Dark Style
Close Menu
Posted on May 31, 2019 by Josh Steinberg
You are using an out of date browser. It may not display this or other websites correctly.
You should upgrade or use an alternative browser.
James Stewart, Dean Martin and Raquel Welch headline this western tale. 4.5 Stars

Bandolero! is an entertaining, if not terribly original, western production with a fantastic cast led by James Stewart, Dean Martin and Raquel Welch, with typically sturdy direction from Andrew V. McLaglen.

Among the legendary careers of stars from Hollywood’s golden era, James Stewart’s has to be among the most interesting. His early career featured an astonishing number of outstanding performances where Stewart’s persona as the good-natured moral center created an image so strong that decades later, he’s still seen as the paradigm for cinematic virtue. After putting his career on hold to fight in World War II, Stewart returned a changed man, and his film projects reflected this difference. That decency was still there, but hardness had seeped in and replaced that innocence. In many ways, Stewart’s postwar career is even more fascinating, giving him the opportunity to play characters who retain an inner sense of decency but not without reservations for how to be decent in an indifferent or harsh world. Stewart mostly kept that twinkle in his eye, but it became more of a wink than a glow. And while Stewart continued to make films across multiple genres, there was no genre better than the western for exploring those rougher edges.

If Bandolero! isn’t the best western that Stewart made, or one of the more original ones, it is nonetheless an exciting picture, filled with enjoyable characters, flashes of humor and real tension. Co-starring is Dean Martin, with whom the picture opens. Martin plays Dee Bishop, leader of a gang who is caught redhanded during a bank robbery and sentenced to hang. Stewart enters the picture as a mysterious figure, en route to the same town, where he comes upon a hangman, on his way to carry out Dee’s execution. Stewart takes just a little too much interest in the hangman’s profession, and before long, it becomes apparent that the character Stewart is playing, Mace, is actually Dee’s brother. Dispatching with the hangman and arriving in town impersonating him, Mace fools the unsuspecting townspeople with his idiosyncrasies, and helps Dee and his gang escape. Mace even succeeds at robbing the bank that foiled Dee. But Dee hasn’t left town empty-handed, taking a woman named Maria (Raquel Welch) with him as a hostage; Maria’s husband was killed by a member of Dee’s gang during the botched robbery attempt. As the brothers reunite, a posse led by the local sheriff (George Kennedy) sets out on their trail. On the run from the law, the brothers soon find themselves in hostile territory at the Mexican border, while Dee and Maria find themselves growing closer.

It’s not earth shattering stuff, but the screenplay (by James Lee Barrett, adapting a story by Stanley L. Hough) is able to set up the characters and the situations they find themselves in well enough to hold interest. The direction, by Andrew V. McLaglen, is efficient and capable, creating a convincing portrait of a time since passed. McLaglen is an under-appreciated director, the son of actor Victor McLaglen, and he applied his trade across a variety of genres and productions for both film and television. However, as capable a director as McLaglen was in any field, the western is where he excelled, directing a number of fine western features as well as numerous episodes of western television shows in the 1950s and 1960s. His most notable work comes from his collaborations with John Wayne and James Stewart, and his western work with Stewart, if not as heralded as the legendary Stewart-Anthony Mann partnership, is nonetheless an important milestone in both men’s careers. Dean Martin is also fantastic, here given the opportunity to play the role in a more straightforward fashion that works for the character and film. While the costume and makeup department seem to determined to make Raquel Welch appear as an anachronism, her performance is able to transcend her overly styled appearance, and she manages to hold her own against Stewart and Martin. George Kennedy, as usual, gives a solid performance, adding some nuance to a character that just as easily could have been one-note.

Bandolero! is presented in its original aspect ratio of 2.35:1. The picture is generally very clean and stable, with only the slightest of blemishes on rare occasions, which serve only to demonstrate how good the film as a whole looks. Color is pleasing, with natural looking skin tones and no evidence of fade. This is a fine visual presentation.

The audio is really where this release of Bandolero! shines. The disc presents two options, both in the lossless DTS-HD MA format: the original 4.0 surround mix and a 2.0 stereo mix. The 4.0 mix is simply outstanding, an aural delight from start to finish. Featuring some directional dialogue and good use of stereo panning, it creates an enveloping sound stage that puts the viewer in the middle of the adventure. While the 2.0 mix retains a good amount of the separation, the 4.0 track here is easily the preferred option. Both are free of age-related artifacts like hiss and crackle, with dialogue easily discernible and Jerry Goldsmith’s fine score well-balanced in the mix.

Audio Commentary with Film Historians Tony Latino, Lee Pfeiffer, and Paul Scrabo – Newly recorded for the Twilight Time release, this commentary is a lively affair where the participants analyze the film and discuss its history.

Original Theatrical Trailers – English and Spanish language versions of the trailer are presented in standard definition; the English trailer is cropped to 16×9, while the Spanish trailer retains the film’s original aspect ratio.

Bandolero! is a solid entry into the filmography of James Stewart, and Twilight Time’s presentation is fantastic, offering beautiful visuals and an incredible sound mix. With the inclusion of a new commentary and a fantastic isolated score, this is easily the best release of this film on disc.

Really enjoyed your write-up, Josh (so what else is new) - especially your opening paragraph on Jimmy Stewart. Made me wish for that Jimmy Stewart thread that you were once contemplating, before settling on his westerns and then the super Cary Grant thread.

Hoping that you’ll have the time and the inclination to revisit that possibility, even though I think it’ll be unlikely.

My Blu-ray of Bandolero! is an Aussie Shock issue from a few years ago, using an older master. I hadn’t planned on upgrading it to the TT, until I read your review.

Maybe one day for a dedicated Stewart thread....but it would be a long, long, long way off....

That said, I hope TT can keep releasing Stewart movies cause I’m happy to keep doing them one at a time.

I’m not sure if the video is from a new master, but the presentation looked better than the streaming version I rented a few years ago on Vudu.

Thank you for your review as this film brings back some memories for me. With a small group of buddies, we decided to see this film at our local cinema and the reason wasn't due to James Stewart or Dean Martin. No question, we loved western films, but in the middle of male puberty we had other ideas with this film along with 100 Rifles that came out a year after this film. Anyway, I own the 2017 German Blu-ray so I'll probably double dip for this title again as I'm a sucker for good audio commentaries.
You must log in or register to reply here. 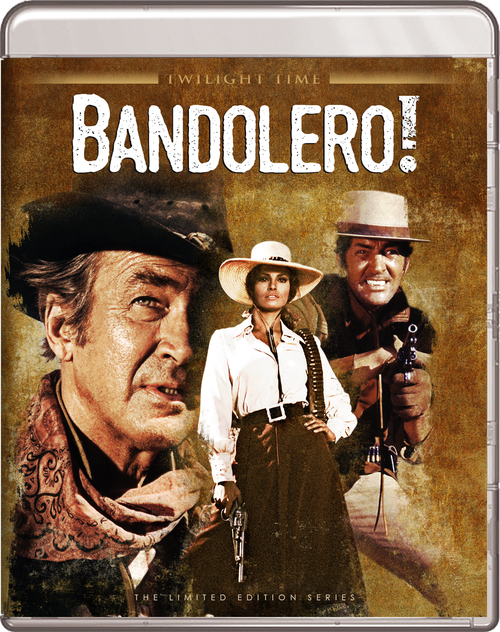