Forum List What's new Dark Style Change width
Log in Register
What's new Search
Menu
Log in
Register
Navigation
Install the app
More options
Dark Style
Close Menu
Posted on October 26, 2016 by Matt Hough
You are using an out of date browser. It may not display this or other websites correctly.
You should upgrade or use an alternative browser.
Stirring docudrama desrves to be much better known. 4 Stars

Dealing with a momentous if little known incident in the history of the Czech resistance during World War II, Sean Ellis’ Anthropoid emerges as a docudrama of great and affecting quality.

Dealing with a momentous if little known incident in the history of the Czech resistance during World War II, Sean Ellis’ Anthropoid emerges as a docudrama of great and affecting quality. With two dramatically effective star turns surrounded by an international cast of fine actors and a period recreation that puts us right back into the heart of the Nazi occupation of Czechoslovakia, Anthropoid  is a movie that history buffs will definitely want to experience.

Two underground Czech operatives, Jan Kubis (Jamie Dornan) and Josef Gabcík (Cillian Murphy), are tasked with assassinating the Nazi third-in-command, SS officer Reinhard Heydrich (Detlef Bothe) also known of the Butcher of Prague. The two co-heads of the Czech resistance, Ladislav Vanek (Marcin Dorocinski) and Uncle Hajský (Toby Jones), have differing opinions about the mission: Vanek thinks it’s a mistake that will ultimately bring the wrath of the Nazis down on his people while Hajský feels action is needed to reestablish hope in the hearts of his countrymen who have seen the resistance reduced to a pittance. While they scout possible assassination scenarios, Jan and Josef are assigned local women to help them blend into the surroundings. Jan and Marie Kovárníková (Charlotte Le Bon) have a love-at-first-sight connection while Josef and Lenka Fafková (Anna Geislerová) take longer to understand their feelings. Jan and Josef both begin to realize, however, that even if they are successful with the assassination, their chances of escaping from Prague would be very slim indeed.

Clearly a labor of love for director Sean Ellis, he has also co-written the script with Anthony Frewin and served as the director of photography for the project. The story basically breaks down into two parts: the preparations and execution of the assassination and its lengthy and nerve-jangling aftermath, each section basically running an hour. The assassination sequence features the kind of quick cutting and flip montage techniques that puts the performances in the hands of film editor Richard Mettler, but it’s certainly edgy fare and almost everything afterward ramps up tension to almost the breaking point until we get to the lengthy climactic sequence where the freedom fighters find themselves cornered by the Nazis and fight valiantly against overwhelming odds (a Czech variation on the Alamo standoff actually). Of course, along the way there are tragic victims (the brave Moravec family who initially hide the assassins) and loathsome traitors, all of which leads to brutal episodes of Nazi torture (the sweet violin-playing teenager At’a played by Bill Milner is especially victimized) and no-questions-asked executions which are still impossible to view decades after the fact. Director Ellis shows it all without flinching, honoring the bravery and sacrifice of a group of men and women about whom we Americans know very little.

Cillian Murphy is the more intense of the two assassins, unworried about an escape plan (he doesn’t admit it, but he surely must have known that it’s basically a suicide mission they’re being asked to execute) and slow to let his more tender emotions take precedence during the mission. Jamie Dornan’s Jan is the optimist who believes there will be a future for him and Marie once the mission is concluded. Both actors hold focus beautifully and their dedication draws us in to see how it ultimately resolves. Marcin Dorocinski’s Vanek is the most intense of the resistance fighters, stoic in his resolve that the mission is a foolhardy one but willing to follow orders as directed by his superiors. Alena Mihulová is heartbreaking as the warm Mrs. Moravec who opens her home and family to the operatives but who is cold as ice when events go sour. Toby Jones is quite effective as the soft-spoken Uncle Hajský who gets things done without bombast. Charlotte Le Bon and Anna Geislerová play the two sweethearts, both effective in their own ways toward complementing the men with whom they’re paired. Brian Caspe and Karel Hermánek Jr. as other freedom fighters and Jirí Simek who abandons the mission and later turns traitor are also noteworthy.

The film’s 2.40:1 theatrical aspect ratio has been faithfully rendered in this 1080p transfer using the AVC codec. Pleasingly sharp rather than razor-edged, the color has also been desaturated somewhat and a slight sepia tone applied to many of the scenes to suggest a bygone era. The reds of the Nazi flags still blaze forth with power, and the blue eyes of the two leading players likewise come across securely. Black levels can be quite effective. The movie has been divided into 20 chapters.

The DTS-HD Master Audio 5.1 won’t blow anyone out of his sitting position even during the firefights in the streets and in the church at the climax, but there are several effective atmospheric pans through the soundfield, and Robin Foster’s spare background score manages to creep up on one softly but purposefully in important moments. Dialogue has been effectively recorded and has been placed in the center channel.

The Making of Anthropoid (30:15, HD): producers Michey Liddell, Pete Shilaimon, and David Ondrícek, production designer Morgan Kennedy, costume designer Josef Cechota, special effective supervisor Kamil Jafar, and actors Jamie Dornan, Cillian Murphy, Charlotte Le Bon, Anna Geislerová, Marcin Dorocinski, and Jirí Simek all discuss aspects of the project which drew them into signing on, discuss their parts in the production, and heap much praise on director Sean Ellis (who is curiously missing from these sound bites) as the bedrock of the production.

Storyboard to Film Comparisons (15:11, HD): three sequences of split-screen comparisons may be selected or shown together in montage: the church shootout climax, the assassination scene, and the opening scene.

An engrossing docudrama involving a little-known event in World War II European history, Anthropoid is a film that deserves to be far better known. Audio and video are very good for this feature, and it comes with a firm recommendation.

Just wanted to bump this and bring some attention to this wonderful film. My wife and I watched this one over the weekend and found it to be absolutely excellent.

This is a piece of (pre)WW2 history I was completely oblivious to, and the filmmakers really pulled off a riveting re-telling of these events that I am thankful for being made aware of. That last half-hour was completely nerve-racking.

Great performances by Murphy and Dornan, and wonderful direction and staging all around (especially the
church siege
). Kudos to director Sean Ellis for the directorial restraint and respectful approach to depicting this story.
You must log in or register to reply here. 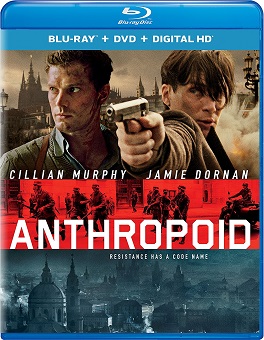