Forum List What's new Dark Style Change width
Log in Register
What's new Search
Menu
Log in
Register
Navigation
Install the app
More options
Dark Style
Close Menu
Posted on October 25, 2016 by Matt Hough
You are using an out of date browser. It may not display this or other websites correctly.
You should upgrade or use an alternative browser.
Engaging docudrama filmed on real locations and featuring two excellent lead performances. 3.5 Stars

Ernest Hemingway was one of the most fascinating of the 20th century Nobel Prize-winning authors, so anything that helps further our knowledge about him is sure to be interesting. Bob Yari’s Papa: Hemingway in Cuba is based on the real-life friendship which developed late in the author’s life with a Miami newspaper reporter.

Ernest Hemingway was one of the most fascinating of the 20th century Nobel Prize-winning authors, so anything that helps further our knowledge about him is sure to be interesting. Bob Yari’s Papa: Hemingway in Cuba is based on the real-life friendship which developed late in the author’s life with a Miami newspaper reporter. Some names have been changed along the way, and events have likely been condensed for the sake of a two-hour film, but it’s a compelling saga amid infrequent bouts of domestic melodrama and one surely worth seeing.

In 1957, Miami-based reporter Ed Myers (Giovanni Ribisi) writes a letter of devoted admiration to author Ernest Hemingway (Adrian Sparks) then living in Cuba, but he’s too shy to mail it. Girl friend Debbie Hunt (Minka Kelly) takes care of that little problem, and the result is an invitation by the great author to visit him in his home outside Havana. Papa Hemingway is quite taken with the ambitious young reporter who while cultivating friendship with the famous writer also posts headline-grabbing stories on the Cuban rebel forces rising up against the reigning Batista regime adding to Myers’ cachet. But his frequent visits to the island show him also the dark side of Papa Hemingway: his wild mood swings exacerbated by alcohol, his ongoing writer’s block, and his sexual impotence which is occasionally mentioned by frustrated wife Mary (Joely Richardson) who put aside her own journalistic career to marry Hemingway and now has periodic regrets about her decision. Papa not only has personal demons he’s fighting, but he’s also being scrutinized by the FBI for tax evasion and gun running making things very tense around the Hemingway household.

The script was written by the real-life “Ed Myers” Denne Bart Petitclerc, so there is a definite ring of truth about the story, and the location shooting in Cuba only adds even greater realism to the tale being told. The invasive on again/off again love affair between Ed and Debbie is a serious intrusion into the story we really care about: Hemingway’s struggles with his demons and the encroaching attempts to take away his home, his bankroll, and his freedom by the governments of two different countries. Director Bob Yari stages some firefights between rebels and Cuban soldiers in the Havana streets that bring our two protagonists dangerously close to losing their lives, but it’s the domestic topsy-turvy existence of Hemingway and his extended family of writers and friends that continually want to keep us riveted to that house and the goings-on there that never cease to be fascinating. Hemingway’s intense struggles with writer’s block are gut-churning as we see his agonized attempts to put thoughts on paper with a loaded pistol at the ready when the world’s demands become too much for him to bear. (A couple of sequences concerning his struggles with suicidal thoughts are among the movie’s most dynamic moments.) And the period trappings with clothes, cars, and furnishings give a real sense of time and place.

Giovanni Ribisi makes a sensitive and appealing Ed Myers, orphaned at a young age by parents who simply threw him away and who has ever since then been unable to express feelings of love with words (of course, when he finally does, it’s meant to be a real breakthrough for the character and a climax in the movie, but its occurrence is fairly telegraphed and not as momentous as it’s meant to be). Adrian Sparks wisely chooses to play Papa Hemingway as a man rather than as a legend and thus draws us in even more completely due to his accessibility. Joely Richardson’s Mary Hemingway portrays both Mary’s charm when sober and utter bitchiness when drunk, a versatile performance. Minka Kelly is rather forgettable and otherwise irritating as the sweetheart who instigates the entire affair and then lives to regret it. Much better is Shaun Toub as gentle, tragic poet Evan Shipman, and James Remar has a firecracker cameo scene as Mafioso Santo Trafficante Jr. who helps us understand the real reason behind J. Edgar Hoover’s disdain of Hemingway. Anthony Molinari has a couple of key scenes as FBI slimeball John Fletcher.

The film’s theatrical aspect ratio of 2.40:1 is effectively represented in this DVD transfer which has been anamorphically enhanced for widescreen televisions. Despite being only in standard definition, sharpness is quite good with close-ups revealing a decent amount of detail in facial features and hair. Color is very nicely saturated with reds coming across with much boldness, and the blues of  Papa’s swimming pool are lusciously tinged. Contrast has been well applied for a consistently good picture. The film has been divided into 32 chapters.

The Dolby Digital 5.1 sound mix does a very nice job with Mark Isham’s background score which gets great spread through the fronts and rears. Atmospheric effects with the gunshots and boat excursions also get fine split surround treatment. Dialogue has been well recorded and has been placed in the center channel.

Promo Trailers: The Birth of a Nation, Brooklyn, A Bigger Splash.

Papa: Hemingway in Cuba offers a fanciful real-life tale of the great author’s last years spent on the Caribbean island and features two outstanding leading performances and real-life locations that give the story a true feeling of time and place. 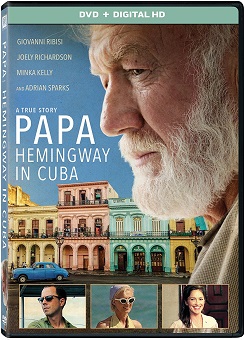